Pittsburgh Ballet Theatre
Open Air: A Series in Celebration of the Performing Arts
Programs A and B
May 21 and 22, 2021

As the hosts of the much-anticipated “Open Air: A Series in Celebration of the Performing Arts,” Pittsburgh Ballet Theatre (PBT) gave audiences a heaping helping of the kind of repertory new artistic director Susan Jaffe will be bringing to the company going forward — a mix of ballet classics and those by some of today’s most intriguing choreographers, many of whom will be new to Pittsburgh audiences.

For the two-week Open Air festival featuring some 20 local arts groups (plus a few imports), PBT’s own offerings for the festival came in the form of two mostly different programs. Program A capped Open Air’s first day of performances, Thursday, May 21, and Program B, its second, Friday, May 22. 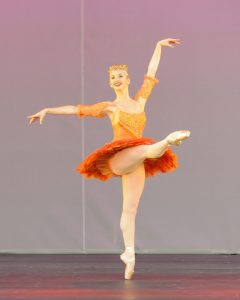 On their newly purchased and impressively large state-of-the-art portable outdoor stage, PBT kicked off Program A with an excerpt from the Act III “Jewels” section of Marius Petipa’s The Sleeping Beauty (1890). Danced to Pyotr Ilyich Tchaikovsky’s music for the ballet, a trio of women as fairies in sparkling tutus and tiaras opened the ballet with a flurry of classical dancing that was staged for them by company répétiteur Marianna Tcherkassky. Standing out was a brisk and bubbly solo by company soloist Tommie Lin Kesten whose radiant smile, precise footwork, and pointing arm gestures energized the audience.

Next, in one of the evening’s early highlights, PBT principal dancer Amanda Cochrane showed she was in top form in the Act III pas de deux from The Sleeping Beauty partnered by soloist Lucius Kirst. Cochrane’s controlled performance was the epitome of stately beauty and grace. For his part, Kirst was a capable partner whose dancing, while reserved, was technically clean.

Perhaps owing to the letter of the Tchaikovsky’s score, the music for The Sleeping Beauty excerpts and the other classical ballet works on the program felt a bit slow and seemed to sap some of the energy and excitement from those works.

Switching stylistic gears, principal dancer Yoshiaki Nakano’s latest ballet for the company, A Frame of Mind then pitted dancer Cooper Verona and soloist Corey Bourbonniere against one another in a male duet. The first of three works on both PBT programs, the contemporary ballet piece, said the playbill, “explores the landscape between expressing and containing profound emotion.” A metaphor for the separation from others during the recent global pandemic (intentional or not), the two men danced similar movement from opposite sides of a large window frame on wheels. The athletic choreography set to composer Max Richter’s bold violin composition November sent the men, as in a trip across a grocery store parking lot riding a shopping cart, rolling and spinning as they pushed the window frame back and forth across the stage with them on it. Both dancers and both programs’ performances with them were captivating, dramatic, and showed another side of Nakano’s burgeoning talent as a choreographer. 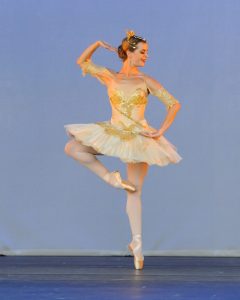 One thing that stood out with PBT’s dancers in both programs’ classical ballet offerings was a bolder expression of epaulement. Since Jaffe’s arrival as director, the company has taken on a revitalized spirit and the dancing, while perhaps still yet to reach its full potential, appears noticeably better.

Choreographer and Pittsburgh-native Gina Patterson’s Trinity Bust: Sculptor. Clay. Muse. came next. The solo excerpt from a larger work-in-progress inspired by sculptor Camille Claudel, a muse and mistress of Auguste Rodin, was performed by principal dancer Alexandra Kochis. Danced to piano music by composer Teresa Carreño, Kochis shared the stage with three sculptures: a dress on a form looking like it was made of marble, a semi-transparent box with the image of a dancer on it, and a table whose leg resembled a woman’s arm reaching upward with outstretched hand. In the solo Kochis moved from sculpture to sculpture in gestural choreography that reflected upon Claudel’s self-doubt and the societal pressure she felt being a female artist in the late 19th and early 20th centuries. Kochis’ heartfelt performance captured Claudel’s perceived emotional distress. 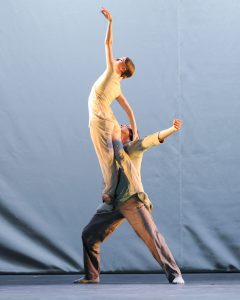 After another eye-catching performance, this time by statuesque company soloist Marisa Grywalski and princely partner Cooper Verona in the Act III “White Swan” pas de deux from Swan Lake, soloist Jessica McCann and principal dancer Yoshiaki Nagano wowed in Annabelle Lopez Ochoa’s Lacrimosa (2006). The moving pas de deux inspired by Baroque Christian iconography opened with McCann being lifted straight up in the air by Nagano in front of him. Then for several long moments she hung suspended in the air, arms out and down to the sides evoking a crucifixion image. That stunning opening was followed in the expressive pas de deux with several more daring lifts. In Lopez Ochoa’s choreography had McCann appearing weighed down by gravity several times falling into spinning carries by Nagano across the stage. The pas de deux was repeated in Program B by dancers Amanda Morgan and Jonathan Breight with similar daring but not quite the level of artistry McCann and Nakano showed.

Closing out both programs was Jaffe’s first full creation for PBT, Bolero (2021). Set to composer Maurice Ravel’s masterpiece of the same name, Jaffe’s contemporary ballet about community was infused with jazz dance movement and plenty of moxie. Program A dancer Kesten had moxie in spades as she led off the work in an athletic solo. The ballet then built in excitement and activity as the music did, adding duets, trios and solos which emerged from the group of 14 dancers that lined the perimeter of the stage on 3 sides. Each variation delighted and repeated in some form later in the ballet. Jaffe’s creation left audiences invigorated and with a sense of her choreographic talent they are sure to see more of in future. 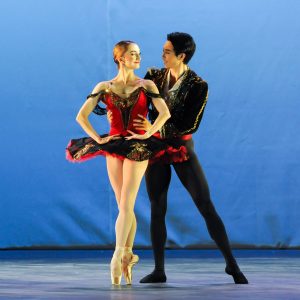 The next evening’s Program B replaced excerpts from The Sleeping Beauty, Swan Lake and The Flower Festival in Genzano with those from Petipa’s Raymonda (1898), La Bayadère (1877) and Don Quixote (1869) as its classical ballet offerings. And as with the performances in Program A, the dancers in Program B’s classical works acquitted themselves nicely apart from some struggles by McCann and Nakano in the Act III pas de duex from Don Quixote.

Highlighting Program B were soloists Gabrielle Thurlow and William Moore in choreographer Sasha Janes’ pas de deux Loss.  A ballet about a couple’s loss of their child, the heart-wrenching pas de deux was set to Samuel Barber’s soul-penetrating Adagio for Strings. Like choreographer Christopher Wheeldon who is known for his spellbinding pas de deux, Janes also has a way of moving two bodies in emotional concert that is genius. Thurlow and Moore flowed through choreography that shot legs skyward in side bends, showcased heartbeat skipping lifts, and had the dancers colliding in desperate embraces. Both dancers drank in the subtleties of Janes’ choreography and used them to add even more brilliance to the stellar work. 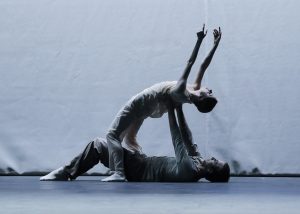 Also a major highlight of Program B, were Cochrane and Kirst in a duet from choreographer extraordinaire Aszure Barton’s Awáa (2012). Never one to let a chance to surprise an audience be wasted, Barton began the duet with Kirst, hunched over with his hands between his legs dragging a lying Cochrane by her hands across the front of the stage. That then led to both dancers lying on the stage floor in an embrace and rolling over each other back in the direction they first came.

The semi slow-moving duet saw the dancers delightfully smashing their foreheads together and gripping each other so tightly in a hug as if trying to fuse their two bodies into one. Barton’s is a choreographic world of unconventional beauty that is comforting in its peculiarity. It is as if that world secretly resides in our bones and Barton has found the key to unlocking it.

With adroit performances by PBT’s dancers in a bevy of marvelous dance works on a grand new outdoor stage, PBT’s Open Air programs were a triumph.  With Jaffe at the helm, PBT’s future looks bright indeed.