To kick off its 2021-22 dance season and the return to in-theater performances, Pittsburgh Ballet Theatre presented the mixed repertory production Season Premiere with the PBT Orchestra. It was the first offering in artistic director Susan Jaffe’s inaugural season of programming (postponed by the pandemic) and made good on Jaffe’s stated commitment to present more ballet works by female choreographers.

The October 23 program hit the ground running with award-winning choreographer Helen Pickett’s zippy 2008 ballet, Petal. Four men and four women performed the work to recorded music by Philip Glass and Thomas Montgomery Newman on a stage awash in buttercup yellow light, with PBT soloist Diana Yohe, also costumed in yellow, performing on pointe in a short solo to Pickett’s contemporary ballet choreography that was heavy on outstretched limbs and elongated lines. She soon was joined by the rest of the women in the cast similarly costumed in yellow leotards, and the ballet’s men, bare-chested and in long teal pants. The dancers took a relaxed approach in executing Pickett’s choreography, casually walking about the stage and then spontaneously leaning into one another to initiate intricate movement phrases. Pickett had the dancers in a myriad of solos and pairings throughout the ballet, including an early playful and dreamy pas de deux performed by corps member Grace Rookstool who flirtingly played “catch me if you can” with soloist Corey Bourbonniere. 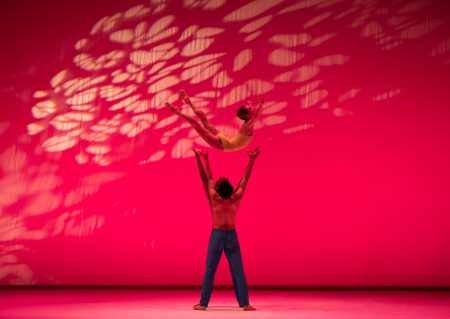 As the ballet progressed, Todd Emer’s lighting scheme (recreated by Christina Giannelli) changed with each new scene, offering up a bouquet of solid pastel colors to enhance the dancing.

Another lovely pas de deux later in the ballet featured real-life married couple soloist Jessica McCann and principal dancer Yoshiaki Nakano, who performed sleek and interwoven partnered movement with an intimacy to it that they executed with precision and grace.

As a ballet, Petal proved an exercise in stylized pretty dancing. Its finely tuned, smooth, and technical choreography gave each of its eight performers room to shine and they did; none more so than Yohe who danced exquisitely and whose career appears to be ever-blooming. 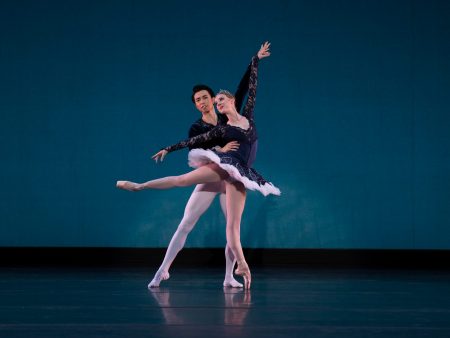 The kind of pas de deux used in high-level ballet competitions, Grand Pas Classique dripped with vibrant, bravura classical dancing. Constructed in the traditional architecture of a grand pas de deux, Thurlow and Haneji danced first together, then each had a solo variation and the pas ended in a coda. For his part, Haneji was a steady partner, and although his solo variation was clean, he lacked a bit of oomph and height in his jumps. Thurlow, in a purple tutu with black tulle, however, never danced better. Her execution of a long sequence of difficult hopping steps on pointe on one leg in her variation was spot on and the mix of delicacy and strength in her dancing was enthralling.

Season Premiere’s other contemporary ballet work, the world premiere of Jennifer Archibald’s Through the Window, was arguably its best. A piece for five women and five men danced to recorded music by Swedish composer Uno Helmersson, Danish composer Frans Bak and others, it was themed on introspection and self-reflection. 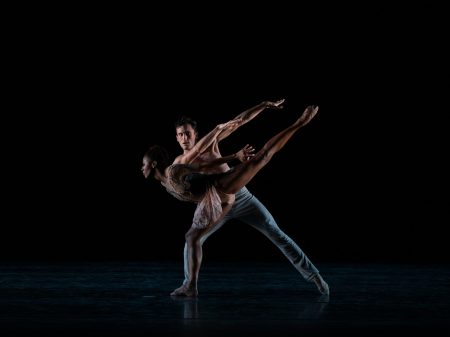 It opened with the cast clustering together center stage performing a flurry of darting hand and arms gestures. As the grouping broke up, the men, shirtless and in long silver pants, and the women in short silver ballet dresses, fell into various dancer combinations performing Archibald’s stylistic mix of ballet, modern, and hip-hop techniques.

A men’s section then took center stage led by Bourbonniere that had the five men swirling in turns and coming together to lift one dancer. It was followed by a women’s section begun by McCann in which the movement by them stretched and pulled. It also included the group lifting high in the air one of their own. 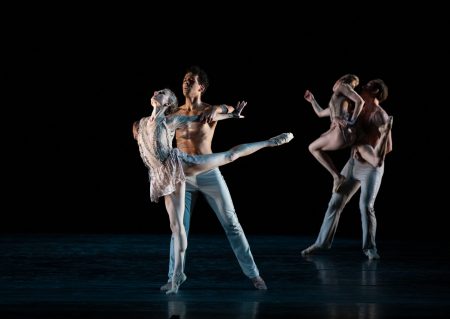 Throughout, Archibald’s flowing choreography for the dancers appeared to create pools of beauty that spread across the stage, and in these pools’ reflections, we saw dance’s equivalent to angels on the wing.

The program closed with Diamonds, the concluding section in George Balanchine’s 1967 masterwork Jewels. Its performance was dedicated to former PBT artistic director and New York City Ballet star Patricia Wilde, who passed away this past July. Set to Pytor Ilych Tchaikovsky’s Symphony No. 3 in D major, Op. 29, the curtain opened to the audience’s approving gasps at seeing the regality of a stage full of ballerinas on pointe and costumed in traditional white bejeweled tutus and tiaras. 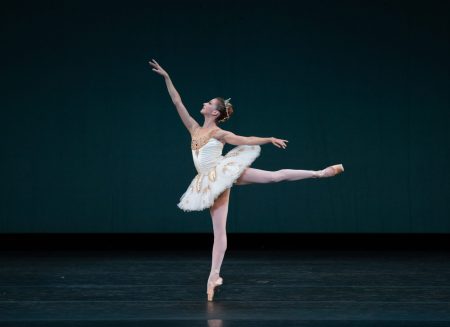 Like Gsovsky’s Grand Pas Classique, Diamonds look is one that matches many people’s perceptions of what classical ballet should, look, sound, and feel like. A choreographically flawless ballet, it unfolds a bit like an Esther Williams production number from an old Hollywood movie with dazzling dancer patterns and formations, including diamond-shaped and other aesthetically pleasing ones.

Principal dancer Alexandra Kochis and soloist William Moore were the ballet’s lead couple and delighted with their commanding stage presence and adroit dancing. In a beautifully arched backbend and in her diving drops forward in Moore’s arms, Kochis was captivating and the supple partnering between the pair wonderfully reflected the emotion felt in Tchaikovsky’s music.

From the corps de ballet and demi soloists to the performances of Kochis and Moore, PBT’s dancers sparkled in this fitting closer to a gem of a season-opening program.