I’m treating myself to a re-read of one of my favorite fantasy trilogies over Thanksgiving weekend and its premise that we are all connected in some way or another reminds me strongly of how connected we all seem to be during Nutcracker season. I was pondering this during the Opening Night intermission of Pacific Northwest Ballet’s run of its 2015 production of George Balanchine’s The Nutcracker. I count, without having to do too much research, at least 11 local productions alone in the Puget Sound region. These range from native-themed ones such as Whidbey Dance Theatre’s charming Act II that takes place underwater — the Arabian Dance is of mermaids emerging from oyster shells holding pearls — to those that are more “traditional” and fairly large productions with a full orchestra.

PNB is at the vanguard of professional productions and its Nutcracker performance is itself a destination attraction.

Both in and out, Seattle’s McCaw Hall — PNB’s home — was replete with related promotionals, memorabilia, photo ops, things historic, costume samples, food and drink — and most importantly a robust audience that was clearly very enthusiastic and happy to be there, including me. Audience members included ballet fans, newcomers, dancers, couples, families, and supporters, among others. It was fun being in this mix, overhearing questions to ushers from “When did it (the new-to-PNB Balanchine version of 2015) premiere?” to comments like “I don’t get what it’s about,” to oohs and aahs over the production values (amazing, including the two films — during the Overture and as a bridge between the Party Scene and Battle) and of soaring dancers, sliding on pointe (it’s a controlled stage trick at the end of the Act II pas de deux) and the buildup to the all-cast finale.

Clean and bright Ian Falconer designs frame and dress Balanchine’s choreography and Opening Night’s cast showed ease of performance, ease of technique, and ease of artistic interpretation. The audience relaxed into viewing right away, captivated by the film that sets up the context of town and place and time, chuckled at the mice that pushed the double doors of the mansion open, and were ready for some theatrical magic.

This magic was supplied by Sarah Ricard Orza as the iconic Sugar Plum Fairy (costumed in a rich grape-colored costume — gone is the traditional pancake tutu), her Cavalier, real-life husband Seth Orza and the effervescent Dewdrop, Elizabeth Murphy.

Henry Cotton’s Mother Ginger was super fun, and I have to award him kudos for negotiating a 10-foot wide costume and 8 little ones bursting out from underneath the skirt.

“Waltz of the Flowers” is lovely and one of Balanchine’s minor jewels. Led by Elle Macy and Leah Merchant, the deep Fall colors of the corps’ tutus brought to mind our NW Fall season. The one green is Dewdrop. Murphy’s ballon (height of jumping) and ease through double ronds de jambe and balances was bright and fun. 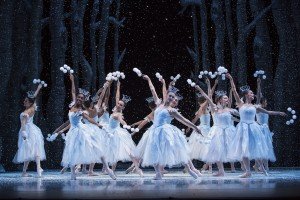 I departed into the evening sky lit green by the art installation outside McCaw Hall, cheeks empurpled by the cool and light in my step as I basked in the afterglow of being connected to the community of Nutcrackers and of PNB’s December offering. In the program, PNB School faculty member Dane Holman is quoted as saying that among other things, people take ballet for a sense of friendships and of community. This was certainly evident throughout the crowd as we all breathed the same holiday air.