Ballet Sun Valley, which was founded in 2011 to bring international ballet to the Sun Valley, Idaho area, has presented summer ballet festivals featuring prominent dancers and choreographers annually since 2012. This year’s Festival, which will be performed before a live audience in the open-air Sun Valley Pavilion, is for the first time divided into two parts: programs on July 12 and 13 include dancers from Pacific Northwest Ballet, San Francisco Ballet, Houston Ballet, The Washington Ballet, and other well-known companies; the August 22 and 23 programs present Philadelphia’s acclaimed contemporary ballet company, BalletX. Each of the four performances reportedly is unique, and each of the July Festival programs includes a world premiere. As of this writing, the July 12 program has already taken place, but all the performances are included here.

The information below is the best available as of this date.

The July Festival was scheduled to open with Program A on July 12, with dances choreographed by George Balanchine (an excerpt from Diamonds, from his full-evening ballet Jewels), Danielle Rowe, Kyle Davis, Edwaard Liang, and Price Suddarth. The Liang piece, The Veil Between Worlds, was a “live premiere performance” that had previously been seen only on PNB’s virtual season. It is set to music by Oliver Davis and was performed by PNB dancers Elle Macy and Dylan Wald. The World Premiere, Suddarth’s  Reverie, was choreographed to a world premiere composition by Alfonso Peduto and was danced by PNB’s Leah Terada and Miles Pertl. Davis’s La Luna, previously performed in South Dakota, was scheduled to be danced by PNB dancers Davis and Sarah-Gabrielle Ryan. 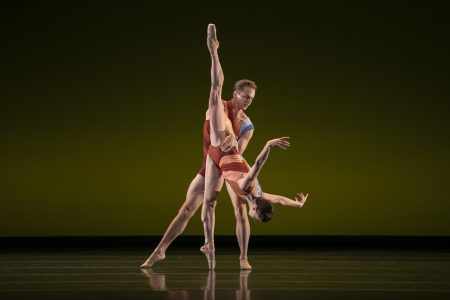 Program B on July 13 includes dances choreographed by Jessica Lang, Justin Peck, Jerome Robbins, Alejandro Cerrudo, and Viktor Plotnikov. Cerrudo’s piece, Future Memory, is another live performance premiere only seen previously in PNB’s virtual season. The second World Premiere at the July Festival, Plotnikov’s The Last Note, is set to a compilation of music by Paganini and Rossini, and is scheduled to be performed by SFB dancers Misa Kuranaga and Angelo Greco.

The August Festival programs each feature performances by BalletX, which is making its BSV Festival debut. The program on August 22 will feature Sunset, o639 Hours, choreographed by company co-founder Matthew Neenan, which will be the first evening-length ballet presented by BSV.  Previously favorably reviewed in CriticalDance following a New York City program at The Joyce Theater, the narrative for Sunset, o639 Hours is based on the true story of pilot Edwin Musick’s 1938 inaugural airmail flight across the Pacific Ocean.  The piece transports audiences to pre-World War II New Zealand, Samoa and Hawaii in an intensely personal story of adventure, paradise, longing and loss.

The August 23 performance, which also marks the official conclusion of BalletX’s 15th Anniversary Season, will be a Gala Program. Scheduled highlights to date include Steep Drop, Euphoric by choreographer Nicolo Fonte and Hernando’s Hideaway by Gustavo Ramirez Sansano, which is a BalletX World Premiere this year.

For any additional or updated information, see BSV’s website: https://balletsunvalley.org/