If you’re a balletomaniac, unless you’ve been comatose for a hundred or so days you’ve probably gotten wind of new project spearheaded by Producer and Director Rem Khaas and featuring Diana Vishneva that is intended to explore one aspect of the story of The Sleeping Beauty in a groundbreaking way on multiple levels: what happens in Aurora’s mind while she’s comatose for a hundred years: what does she dream about? The production, titled Sleeping Beauty Dreams, received a formal kick-off at a “Meet the Artists” program on Thursday evening at the Guggenheim Museum. 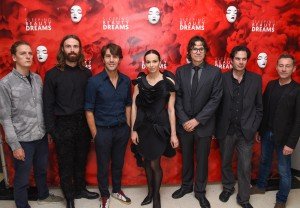 With folk roots going back at least to the 14th Century, most recitations of The Sleeping Beauty story are derived from  Charles Perrault’s La Belle au bois dormant (“The Beauty sleeping in the wood”), first published in 1697, and a subsequent adaptation by the Brothers Grimm in 1812. Except for a somewhat gothic side of the tale involving an ogre of a mother-in-law that has been sanitized out of more contemporary iterations in the past few centuries (or morphed into a separate story), the whitebread Disney-ish version is the one most people are aware of, and which, with few exceptions, has found its way into most ballet versions. [Two exceptions are Jean Christophe Maillot’s La Belle, which relies on the original two-pronged Perrault story (and which, to my knowledge, has not yet made its way to New York), and Matthew Bourne’s outrageously wonderful Sleeping Beauty, which was presented at City Center five years ago.]

But none of these versions has explored Sleeping Beauty’s 100 year sleep. Readers and viewers suspend disbelief and take on faith that while the world changed around her, she awoke with a stranger’s kiss physically unchanged.  No one, to my knowledge (and to the knowledge of everyone on the Guggenheim program) has wondered about, much less visualized, what was happening in Aurora’s mind while she slept. Were there no brainwaves, or did she dream about something? And if she dreamed, what did she dream about? And in exploring this, does it show that The Sleeping Beauty is really a coming-of-age (sexual awakening) allegory – she goes to sleep a girl, but awakes a woman? 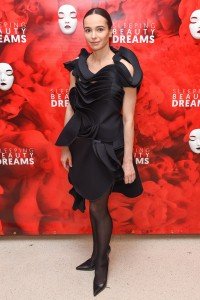 As I understand it, this is what Sleeping Beauty Dreams will explore – what Aurora (or one of the other names that the character has been given over the centuries) dreamed of for a hundred years.

But the subject matter is only one aspect of this production. Even more unusual is how this exploration is to be presented on stage. Based on some of the explanations provided at this preview, it will be an interaction between the real and the imagined via a combination of live action, film, and virtual reality. Integrating live action and pre-filmed action, either as overlap or as phrase repetition or completion, is nothing new, and the results have been either mind-blowing or incomprehensible.The difference here promises to be a live presentation between dancers – Vishneva and Marcelo Gomes – and avatars that will respond,in real time, to whatever the “real” dancers are doing on stage (presumably also with a filmed background or projection), all in a digital world of images, film and music: a marriage of the technical with technique. 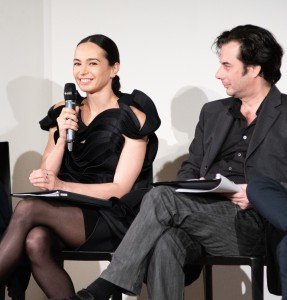 Diana Vishneva and Tobias Gremmler
at the “Meet the Artists” program
at the Guggenheim Museum.
Photo by Brian William Waddell

In addition to Vishneva and Khass, who originated the project and was present in the audience, Thursday’s program featured the technical masterminds behind the project.  Each of the speakers – Tobias Gremmler (digital artist), who, together with technical artists collectively known as fuse*, will visualize and bring to life the digital avatars that will react in real time to the dancers’ movements on stage; Edward Clug (choreographer); Bart Hess (costume designer), who will design costumes that interact with the virtual projections; Thijs de Vlieger (composer), who created the electronic score; Laurent Fort (light artist); and Andrei Severny (filmmaker) – briefly explained his artistic/technical area of expertise and role in creating the piece.

Each of the three short films (all by Serverny), the first two of which were world premieres, explored the creative and technical boundaries of their work. The first, Digital Dreams, visualized Gremmler’s digital artwork; the second, Colliding Opposites, focused on Hess’s design ideas and process (Hess famously created Lady Gaga’s “slime dress”), and the third (which premiered in 2015), Gravitation: Variation in Time and Space, displayed Vishneva (on film) in some sort of haze state moving and posing in ways in which the interplay of light and movement, as well as time and space, was paramount (as I watched, I thought of the ending to Balanchine’s Duo Concertant, on a much larger scale). I’m not an expert in digital technology, so the first film impressed me in an academic kind of way, and the third as a visualization of a slow-moving dreamscape. But, possibly because it’s appears more concrete, I found Colliding Opposites to be fascinating. 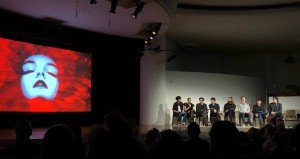 Be that as it may, Sleeping Beauty Dreams (note that the word “Dreams” works as both a noun and a verb) promises to be a different kettle of dance and digital art then anything previously seen, and that, because of the unique interactions between the dancers and the avatars, no two performances will be the same. Aside from the technical challenges involved, others will be to make the presentation move dreamlike but not so slowly as to put the audience to sleep, and to make it, ultimately, more romantic than scary. But with Vishneva and Gomes, no strangers to each other and their Sleeping Beauty roles, and in their first performance together since she retired from American Ballet Theatre in June, 2017 (it seems much longer than that), there’s no telling what dreams may come.

In December, while most dance venues are displaying Marie (Clara) dreaming her Nutcracker dreams, New York audiences will see if they can carry it off.

Sleeping Beauty Dreams premieres at Miami’s Adrienne Arsht Center on December 7 and 8, and at the Beacon Theater in Manhattan on December 14 and 15.

Marcelo Gomes: A Danseur For All Seasons