Reopening schedules featuring live, in-person dance performances (and in one case, a significant dance film) have been announced for the Fall 2021 Season and beyond. Schedules posted by major ballet and dance companies (e.g., locally, American Ballet Theatre; New York City Ballet), as well as by well-known smaller companies, have been posted for some time, and are readily available by visiting these companies’ web sites. The programs below have been posted on the venues’ sites as well, but may have been overlooked.

One caveat: as of this writing, Covid-19 cases have increased due to primarily to the more virulent Delta Variant. Certainly all the venues below, and companies and dancers, expect the schedules to be maintained, but there is a possibility that seating availability may be limited and/or entrance restrictions may be imposed depending on continuing developments and guidance. It’s not over ‘till it’s over. So check the pertinent websites for any mask-wearing, vaccination, or social-distancing requirements.

As usual, all events and scheduling are subject to change.

First out of the box in terms of significant venue reopenings is the New Jersey Performing Arts Center (NJPAC) in Newark, N.J.

Of those performance venues included here, The New Jersey Performing Arts Center is perhaps the least familiar to people outside the New York / New Jersey area. Located at 1 Center Street in downtown Newark, N.J., NJPAC describes itself as America’s most diverse performing arts center as well as the artistic, cultural, educational and civic center of New Jersey, bringing diverse communities together, providing access to all and showcasing the state’s and the world’s best artists while acting as a leading catalyst in the revitalization of its home city, having attracted nearly 10 million visitors (including over 1.7 million children) since opening its doors in 1997. It’s a beautiful space (I’ve been there), only a short train ride from Manhattan (via PATH, Amtrak, or NJ Transit), and a relatively easy walk from Newark’s Penn Station. Of course, parking is plentiful for those who choose to drive.

NJPAC’s Fall, 2021 schedule for dance and ballet performances (other Fall, 2021 programs will be presented there as well, but are not addressed here) starts a month early, on August 10 at 7:30 p.m., with a new production by the Latin and ballroom champions Maksim and Valentin Chmerkovskiy. The “Max and Val Live: Stripped Down Tour” is a new production filled with the kind of dancing and showmanship familiar to those who’ve seen them perform in the past on ABC’s “Dancing With the Stars,” with a measure of deeply personal storytelling added as well. It’s promised to be a unique experience that brings audiences closer to the Chmerkovskiys than ever before. Whether this closeness is physical or emotional (or both) remains to be seen. Tickets start at $39. 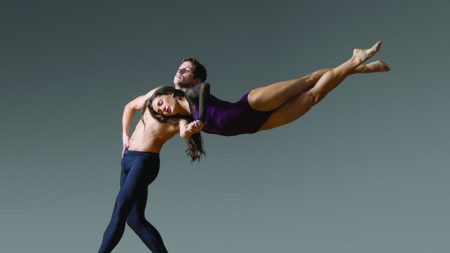 Highly regarded Parsons Dance, which has merited highly favorable reviews from me in the past, returns on October 22 at 7:30 p.m., with a program featuring what’s described as classics from the Parsons Dance repertory that showcase the company’s 35-year commitment to delivering incomparable works. Tickets: $79 and up.

Jersey City’s Nimbus Dance, which I “discovered” this past year, returns on November 6 at 7:00 p.m. with a special program that’s part of NJPAC’s TD James Moody Jazz Festival. The highly eclectic group of dancers has an urban, community-based feel to it but is equally noteworthy for its highly talented group of dancers and the quality of its choreography (most often by Artistic Director Samuel Pott and/or members of the company). This particular program includes the world premiere of Raucous Caucus Tango, a collaboration with Latin Grammy Award-winning tango virtuoso Pedro Giraudo (bass, bandleader) and his Tango Quartet described as a creative mash-up of choreography, bawdy storytelling, and slapstick humor that pokes fun at our electoral process, set to the dramatic rhythms of Argentine tango. Sounds like a hoot. Tickets start at $59.

Hard on the heels of November comes … December, and The Nutcracker. On December 11 at 3:00 p.m., NJPAC will host a return visit of the State Ballet Theater of Ukraine. This staging, set to Tchaikovsky’s classic score and featuring Andrey Litvinov’s new production and choreography, premiered in Ukraine on December 30, 2020.  Tickets: $29 and up. 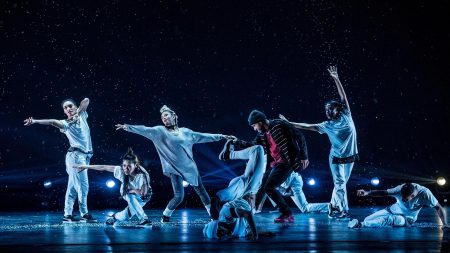 Dancers in “The Hip Hop Nutcracker”
Photo courtesy of NJPAC

Even with a changed production, one can expect that version of The Nutcracker to be relatively traditional. Decidedly not traditional is NJPAC’s original holiday extravaganza The Hip Hop Nutcracker: a reimagination of the traditional Tchaikovsky ballet with explosive “urban” choreography that turns the traditional choreography on its head, sometimes literally. The production has been touring nationwide and performing on the NJPAC stage for seven years, earning acclaim from critics and audiences from coast to coast. Kurtis “The Breaks” Blow serves as the special guest emcee. Tickets: $29 and Up

Normally I would not include a Film Festival in a listing of upcoming dance-related events, but this one is an exception.

Havana Film Festival New York, a celebration of Latin American Cinema, returns for its 21st year at with movie premieres and masterclasses showcasing top Latin talent at Village East Cinema and Instituto Cervantes. The full schedule of over 30 films and the identities of special guests has not yet been released, but certain information has already been provided. 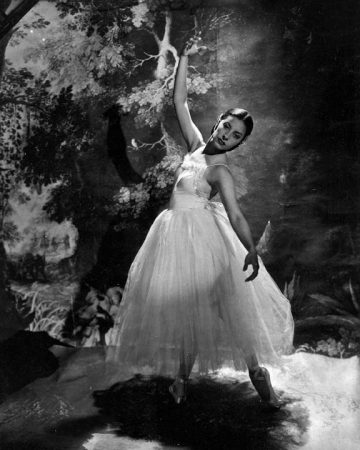 One of the Festival’s focuses will be the celebration of two recently-deceased Cuban filmmakers: Juan Carlos Tabío (1943-2021) and Enrique Pineda Barnet (1933-2021) with screenings of the newly restored versions of some of their earlier films. One of particular dance interest Is Peneda Barnet’s Giselle (1965), a performance film that follows Cuba’s (and American Ballet Theatre’s ) celebrated ballerina, Alicia Alonso, in her acclaimed portrayal of Giselle in the ballet that made her an international star.

No specific dates (aside from the Festival dates) or times have been announced yet, but films will be screened during the afternoons and evenings with free panels at 11AM on Saturday and Sunday. Masterclasses, retrospectives, and other special events will be presented in partnership with local cultural organizations and educational institutions, free of charge and open to the public.

Updated information can be obtained after August 11 via the Festival’s web site: www.HFFNY.com

For eclectic dance programming, few venues outdo New York’s Joyce Theater. In September, The Joyce will reopen its doors to live audiences with a full slate of performances from companies both national and international, in styles ranging from tap, swing, traditional South Indian, and Indigenous American to modern, contemporary, and classical ballet (both parody and traditional), and with over a dozen scheduled world premieres. Parenthetically, The Joyce presented the last programs I attended live before the pandemic shuttered theaters. 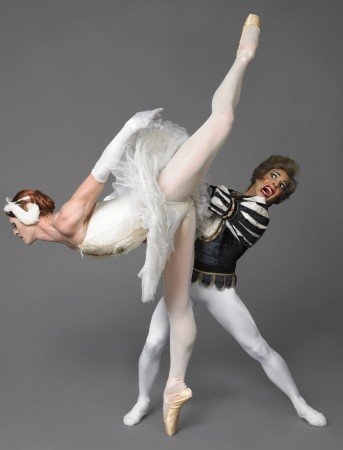 A selective summary of personally-selected highlights of the Joyce season include Ragamala Dance Company, which uses Bharatanatyam, a traditional South Indian form, as a means to bridge the ancient Hindu thought of the life-death-life continuum to the current-day experience of life and death in the Indian diaspora; Pacific Northwest Ballet’s first Resident Choreographer, Alejandro Cerrudo, is scheduled to make his Joyce debut with It Starts Now, which reportedly will explore the nonlinear nature of time; Caleb Teicher follows with what’s described as a fresh combination of Lindy Hop and improvised social dance in the premiere of Swing Out, created in collaboration with Evita Arce, LaTasha Barnes, Nathan Bugh, and Macy Sullivan; The Trocks (Les Ballets Trockadero de Monte Carlo) return once more for their biennial three-week holiday engagement, which will include the world premiere of Nightcrawlers, which spoofs Jerome Robbins’s In the Night; Lucinda Childs returns with her modern dance classic, DANCE, a fascinating, minimalist work that features nine dancers mirroring with stunning precision footage of the original company executing this 40-year old geometric exploration of repetition to its Philip Glass score; two programs by The Martha Graham Dance Company, including the newly recovered Graham solo Immediate Tragedy, the world premiere of Andrea Miller’s Umbra, and Graham classics Appalachian Spring and Diversion of Angels; COMPLEXIONS Contemporary Ballet will return with a program that includes the premiere of SNATCHED BACK from the EDGES; the newly reimagined Gibney Company makes its Joyce debut with a program that includes new works by Sonya Tayeh (twice included in my annual “Tops in NY Dance” lists), the U.S. debut of Alan Lucien Øyen, and the first work by inaugural Gibney Choreographic Associate Rena Butler; Parsons Dance returns with a two-week season that includes four world premieres, including Balance of Power, a solo choreographed by company co-founder David Parsons for the always impressive Zoey Anderson, PastTense from BalletX co-founder Matthew Neenan and Chanel DaSilva’s On the Other Side, as well as one of the company’s signature works, Caught; and Cuba’s Malpaso Dance Company returns with a program featuring Mats Ek’s woman with water, Robyn Mineko Williams’s Elemental, and Nana Para un Insomnia, created by Malpaso’s own Daileidys Carrazana.

L-E-V
Chapter Three: The Brutal Journey of the Heart

Although dance programming for New York City Center’s Fall: 2021 – Spring 2022 dance season have been released, as of this writing complete details beyond the scheduling itself have not yet been disclosed. Be that as it may, September ticket sale dates to the general public for four of the dance programs have been announced, and should be noted by those who regularly attempt to pounce on available tickets as soon as individual ticket sales begin. The following is a brief summary:

Specific components of the 2021 incarnation of City Center’s venerable Fall for Dance series has not yet been announced. Tickets, priced at $15 each (plus service charge) will go on sale to the general public on Sunday, September 19 at 11a.m.

In what may prove to be one of the year’s hottest tickets, TWYLA NOW, a program honoring Twyla Tharp as she turns 80, will feature Alvin Ailey American Dance Theater’s Jacquelin Harris and James Gilmer; American Ballet Theatre’s Catherine Hurlin and Aran Bell; actor and dancer (and former New York City Ballet Principal) Robert Fairchild; and NYCB’s Sara Mearns, Tiler Peck, and Roman Mejia. Tickets will go on sale to the general public on Tuesday, September 21. 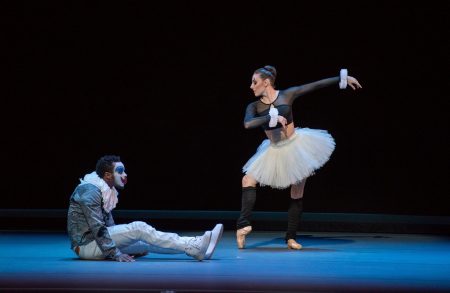 Tiler Peck, here with Lil Buck
in Jennifer Weber’s “Petrushka”
in a prior City Center Fall for Dance program
Photo by Stephanie Berger

A new series, Artists at the Center, this year will feature Tiler Peck with a program of her design, performing alongside a variety of dancers and musicians. A world premiere, set to music composed by Jon Batiste will be presented along with works by William Forsythe, Alonzo King, Jennifer Weber, and Peck (this one, not that one). Tickets will go on sale on Tuesday, September 21.

Another new series, the City Center Dance Festival, features four companies: Ballet Hispanico, Dance Theatre of Harlem, The Martha Graham Dance Company, and Paul Taylor Dance Company. Specific performance dates and programs for each company have not yet been announced, but tickets will go on sale to the public on Tuesday, September 21, and a special program is being provided (Access City Center Club), with exclusive ticket offers for those 35 and under. For details, check www.nycitycenter.org

When more details of these and other Fall 2021 programs are provided, I’ll add them to these listings.

Dance Theatre of Harlem: The Legacy of Black Ballerinas

Hong Kong Ballet at The Joyce