I’ve been living in Washington, DC, for over a decade, and I’ve enjoyed watching choreographers and dancers grow here in the nation’s capital. Believe it or not, DC is a city in which artists can thrive. Amidst Congressional chaos and political party bickering, the arts hold strong and hold DC’s residents together. This country will never agree on everything, but I think there’s plenty of agreement that the arts matter. I remain thankful for the gifts that artists give. Particularly in tumultuous times, a night out at the theater can provide a welcome respite. PrioreDance’s Cirque De Nuit successfully delivered such an escape.

The program notes indicate that Cirque De Nuit (“Circus of the Night”), created and choreographed by Robert J. Priore, features a roaming band of traveling entertainers who bond both inside and outside of the circus tent. Authors, along with artists and audiences, have long been attracted to the magic and community of societal outcasts in the world of the circus. As a reader, I’ve been drawn to circus/sideshow-themed novels, including Erin Morgenstern’s similarly named “The Night Circus,” and Katherine Dunn’s breathtaking “Geek Love.” And DC certainly has seen its share of circuses lately!

It’s natural that circus life might spark Priore’s choreographic imagination. After all, the subject matter offers mystery, romance, quirkiness, and creepiness. What does Priore bring to this well-covered territory? A lot of what one would expect.

I’m not sure who to heap praise upon for the costumes and makeup (no credit is given in the program), but the dancers looked endearingly odd. Their pale faces, powdered and painted, conjured otherworldliness. A pair of female dancers twisted and tossed straggly ankle-length hair. Gypsy-inspired corsets with curtain fabric skirts, and the music, too, often French ballads, set the wandering troupe in a fantasy Europe of yesteryear. Maybe because I don’t speak French, however, I felt the music sometimes overwhelmed the dancing. The lighting design by Paul Callahan kept things fairly dark and somewhat mottled.

Cirque De Nuit, however, for me, didn’t illuminate the subject it tackles. Although the dancing was impeccable, the choreography, overall, came across as rather bland, especially given the focus of the work. I wanted more risk, more danger, more emotion, but this circus was strangely uneventful. A few times dancers, invisible in the wings, whooped and clapped, but the movement on the stage didn’t burst with enough excitement to merit the wild applause. 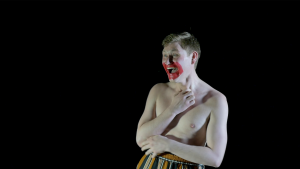 I longed to have more insight into the individual characters and for the role of each dancer to be more distinct. Only the ringmaster, the wonderfully lithe Abrams, stood out as being relatively well-defined. I puzzled over the motivations and identities of rest of the superb cast.  Weirdness could have been pushed further. Carlough, as a clown with a spooky red-smeared smile, laughed maniacally. Confusingly, after a solo toward the beginning of Cirque De Nuit in which he spasmed with loud guffaws, his unsettling giggles were no more. Baraoidan once acted like a pet, crouching and following along like a monkey, which was amusing, but then he straightened up. Maybe the extreme behaviors were simply part of their acts?

Surprises were few. I loved it when subsequent to a section with all of the dancers on stage, a male and female dancer were left alone together. A duet between them didn’t commence, though. Instead, the male dancer turned and walked off, and another female dancer entered the stage, ending eventually in an amorous quintet among the women. That small surprise was clever, and I wish there had been more of them.

In addition to Abrams as the domineering and revered leader, among the dancers who caught my eye were Robert Woofter and Magali Zato. Woofter is both incredibly graceful and powerful, as is Zato. An early duet between Zato and the also excellent Wood sang with beauty and feeling. And Woofter, in a solo, dramatically stretched and propelled himself in a storm of elegance. I appreciated how Priore let the women be strong, and the men be tender, and also vice versa.

At the conclusion, a dancer rolled up the red tape that had formed a square demarcating the performance space. Abrams looked defeated and exited the stage behind his troupe with his head bowed. My companion for the evening asked me after the performance if taking up tape from the stage is “a thing.”  Yes, apparently so, because he and I have seen this a few times in the last year — tape carefully placed and then ripped up and bunched into a ball. Watch out for the tape trend?