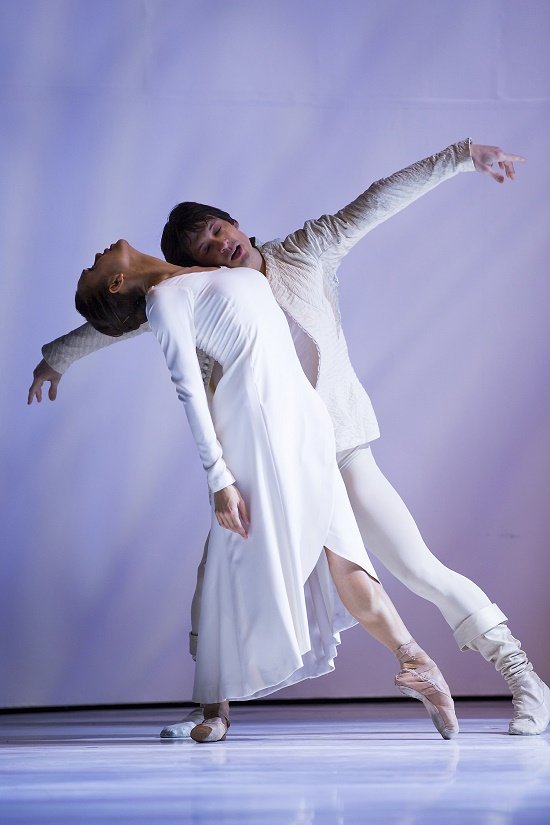 How fitting that the much beloved and missed Noelani Pantastico made her return to Pacific Northwest Ballet (PNB) in the very same part and vehicle that lured her away from our fold when PNB premiered it in 2008, Juliette, in the French choreographer Jean-Christophe Maillot’s visioning of this Shakespeare tale. It was thrilling to see Pantastico again after this hiatus, and I knew, from the outset that not only would we be enjoying the “old” Noelani but also the “new”  – we would be reaping the benefits of her time abroad in Monte Carlo. From her playful entrance with her Nurse [marvelously danced and acted by Margaret Mullin] she took us on Juliette’s journey from young joy to its tragic ending.

It was great, too, to see Jonathan Porretta back on stage as Mercutio, a part that seems tailor-made for him. Mercutio is a bon vivant, who, as we all know, takes it too far, and his death at the hands of Juliette’s brother, Tybalt [Seth Orza] is one of the events that precipitates the downfall of the two lovers. Orza, by the way, looked terrific and terrifying – tall, strong, cutting his way easily through difficult choreography. Apparently his character has a chip on his shoulder, and Orza played him as menacing. When he made his entrance, I thought, “Look out!”

Lady Capulet – in a part strongly attacked by Laura Tisserand, is a schemer who uses her daughter, through the failed attempt to marry Paris [Joshua Grant], for political and power gain. [She also seems to have an unnatural attraction to Paris.] When she mourns the deaths of her two children, we’re not sure if she’s grieving or expressing regret at what might have been. Perhaps both.

One aspect of Maillot’s re-envisioning is making Friar Laurence central to the action – not just giving, as in the play, a fateful potion [there is no potion in this ballet version, by the way].  We see the story as a flashback, through Friar Laurence’s eyes and memory. A tough assignment – I recall former principal dancer Olivier Wevers doing this so well, yet corps de ballet member, Miles Pertl more than rises to the occasion. Pertl is new to PNB this season, joining in 2015, and will be one to watch.

This brings us to our Romeo, James Moore. My former viewings paired him with former principal Kaori Nakamura, as I recall, and Lucien Postlewaite with Pantastico. [Tall cast versus less-tall cast.] Yet this casting of Moore with Pantastico worked so well that while they were dancing it as hard to imagine these two cast with any other. His energy, technique, and boyish good-nature as Romeo played well with her effervescence, joy, and in-depth interpretation.

I felt we saw an “A” cast giving an “A” performance. Each and all in the moment, alive, and showing us great dancing.

This cinematic production was undergirded with minimal yet effective set pieces and costumes that made our heroine and hero stand out.  Certainly this production could not have been at the level it was without the mighty PNB Orchestra playing Prokofiev’s score under the watchful eye and baton of Emil de Cou.