A mysterious figure standing atop a wooden swing, his raven black cape rippling down his back like angel wings, cascading to the floor in a dark pool of silk. Six darkly clad men, ominously marching in stage right. This is the setting for Project 44’s Christopher, a modern take on the fairy tale Snow White. Christopher explores the dark side of human nature-jealousy, possession, domination, seduction and isolation. While the classic fairy tale offers a G-rated, easier to digest portrayal of these dark proclivities – it was written, after all, to entertain, educate and maybe even slightly frighten children – Christopher is the grown up version with a twist.

Danced by a cast of 8 men, jealousy takes on an aggressive physicality, possession an enchanting pull. Domination becomes a subtle manipulation game. 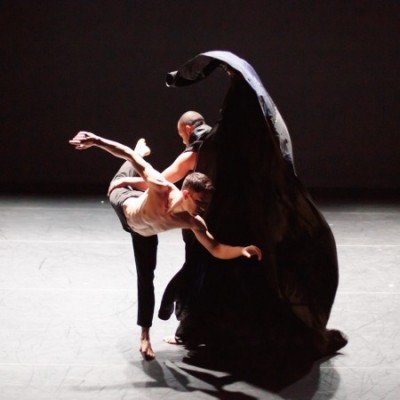 Maybe it is because I am not a man that I find male dancing so captivating and rewarding to watch. As a female dancer, I know what it is to be in my body, but the male dancing body is so different. There is a distinctive power, gravity, and strength – a contrasting physicality. These 8 men, so unique in body yet so complementary to each other, possess a gracefulness that is masculine and strong, yielding yet deeply grounded. The choreography, by Artistic Director Gierre Godley in collaboration with the dancers, showcases the raw athleticism and primal passion of male dancing. Full of sinuous partnering, web-like interactions and symbiotic relationships, Christopher is a feast for the eyes. Explosions of movement and speed suddenly arrest into languid arabesques, or reaching arms, suspending time before the next flurry of activity.

Each dancer is equally captivating for his individuality. However, this is not a piece of stand-alone individuals – these men dance seamlessly together, beautifully, as if they have been doing this with each other for years. They are like separate words in a sentence that tell the same story. Godly, as the evil, jaded queen (in this version just called “Him”), is a tall and imposing presence. When Christopher (aka “Snow White”) an innocent, curious character danced by Gildas Lemonnier, first encounters Him in the enchanted forest, his curiosity is met with an interest that seems to hint at something oppressive. Perhaps, like in the original fairy tale, jealously soon turns to vengeance as the Queen recognizes in Christopher his own fading youth and beauty, his feelings of desirability overshadowed by the raw sensuality of youth. Perhaps his ego knows no other way to encounter desire without total possession and subordination. In their first duet, a hypnotizing dance of courtship, Christopher, led and manipulated by a coolly detached Him, Godley’s hands on Lemonnier’s skin are mesmerizing and eerie. It is the touch of an abusive lover – sensual and sinister, baiting, softening, and weakening before it coldly takes possession of its claim. 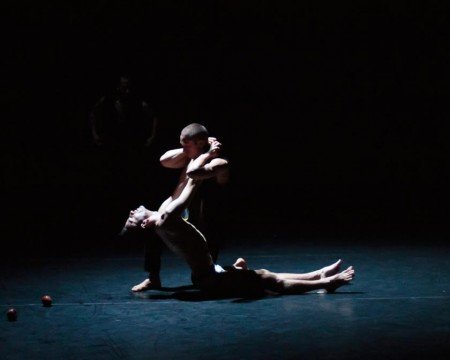 Touch is an integral and fascinating component of this piece and a vehicle for much of the storytelling. The way the dancers touch their own bodies, each other, and the air itself, giving it physicality with the weight and gesture of their fingers, is breathtaking. Moments where a hand slowly and deliberately comes to rest on a shoulder or neck, caresses a thigh to seamlessly support a body into the air, are moments that speak volumes in silence. They are moments that pull at the heart, stirring recognition and echoing familiarity. As dancers, and as humans, we use touch all the time and can easily take it for granted. But the men of Project 44 take their time with touch, giving it a solemnness and significance that really registers. How the quality of touch transforms over time – sweet, playful, sensual, domineering, flattering, aggressive – is a brilliant artistic choice to use as a vehicle for narrative. Fairy tales have words. Dance has movement and bodies, and in the physical world touch speaks what words cannot. The sensuality and emphasis on touch bring viewers into Christopher in way that otherwise would have been lost. 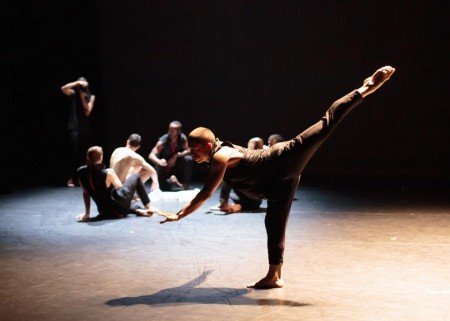 But it isn’t all doom and gloom. There are lighthearted and funny bits, like the gay club scene where words like bear, otter, and twink flash on the wall like a silly roll-call, or the fashion model scene where Christopher struts around in tighty-whities mugging for the camera as his entourage fusses, preens, and fawns over him. Even the ending cuts the overall thematic severity. As Christopher lays motionless on the floor, rendered inanimate from the venomous kiss of Him, his friends and lover unable to revive him, the 6 ‘dwarves’ skip off to happily read from a large book with the word ‘next’ scrawled on its cover.

A sophisticated, richly layered, intelligent and fascinating take on a classic story, beautifully and masterfully danced by the men of Project 44, Christopher is a success and marks a new foray into story ballets for this young company. I look forward to seeing more of Godley and Project 44 in the near future.