Emma Southwell is responsible for dance programming in the elegant 400 seat Linbury Theatre, in the basement of London’s Royal Opera House. For the past few years, she has programmed a selection of young dance companies in the Summer and she deserves congratulations for the success of this venture, bringing talented dancers to perform ballets we are unlikely to see elsewhere.

For the first company from beyond Europe, Southwell brought Queensland Ballet Jette Parker Young Artists (doesn’t quite roll off the tongue) which made a fine addition to the season. Queensland Ballet’s Young Artists’ programme is a year-long apprenticeship for early career professionals, providing the opportunity to be part of a dynamic, successful company and work with talented choreographers. 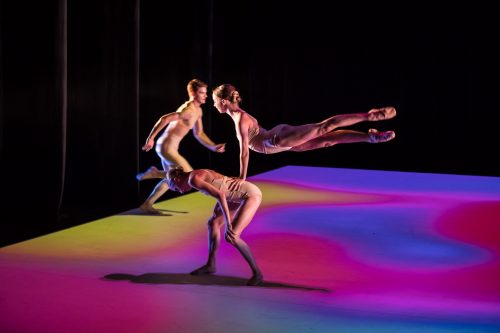 Loughlan Prior describes The Appearance of Colour as inspired by the advent of colour TV in the 1970′s. Throughout the work, patterns by animator, Glynn Urquhart, dance around the stage, initially in black and white and later in colour. The mix of dance, music and animation creates an elegant feast of images exemplifying Gesamtkunstwerk or total theatre.

It arrests our attention from the first moment, as the company, positioned in a V, move together and then in canon with rapid, repeated hand and arm movements, danced on the spot with the women jumping on and off pointe. After this exhilarating opening, the ensemble give way to two men, Frederick Montgomery and Joshua Ostermann who ricochet around the stage to John Metcalfe’s vibrant score. From the first, the Queensland men all impressed with the power of their jumps and spins. 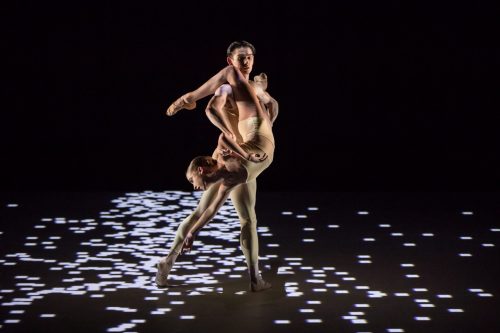 A solo woman enters, Amber Mitchell-Knight, and moves at a much slower pace before being joined by Luca Armstrong for a series of innovative lifts and balances. Edison Manuel enters and the trio create a series of striking patterns, before Mitchell-Knight is alone again, looks slowly upwards and coloured patterns are introduced. The music takes off again with patterns flowing across the stage and the dancers streaking back and forth. From time to time, the set darkens and the performers have light boxes, initially white and later coloured, making shaky patterns. Some of these patterns are interesting, but dancing with a box in each hand ain’t easy. In the finale Mitchell-Knight is at the centre of a coloured circle and the ensemble move slowly around her and we see elements of the earlier duet. Finally the dancers create a pyramid and slowly elevate Mitchell-Knight at

the centre, with her arm stretched upwards. The Appearance of Colour frequently had me smiling with delight. 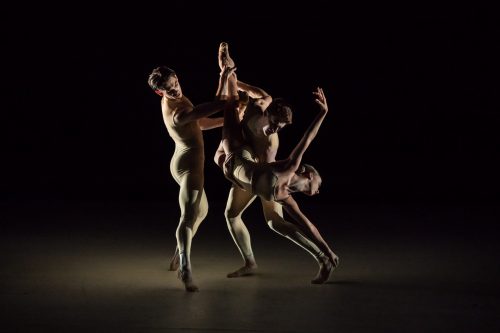 Fallen by Natalie Weir, Resident Choreographer at Queensland Ballet, opens with a man in a chair, Joshua Ostermann, writhing in anguish. He is joined by a second figure, Edison Manuel, and as they dance in unison we realise Manuel is Ostermann’s alter ego. Other ghostly figures enter, imploring Ostermann, perhaps to let the past go. When they are joined by a woman in red, Sophie Kerr, we realise that lost love lies at the heart of the ballet. Weir maintains our attention and skillfully choreographs for both the principal characters and the ghost figures. The sense of loss and a life failing to meet expectations proves a moving tableau.

Perfect Strangers by Jack Lister, Associate Choreographer at Queensland, is a short, quirky duet placed between the two longer works. Not just strangers, Heidi Freeman and Lewis Formby, seem to be robots, exploring the space around them and how they can interact with a mix of slow and abrupt arm and body moves. Lister’s choreography is distinctive and the two dancers are excellent. However, the lack of emotional content, whether animosity, affection or despair left me less than fully satisfied.

Overall, a fine evening of dance and a feather in the cap of Queensland Ballet’s Artistic Director, Li Cunxin. I hope we see the company in London again before long.

Danish Romanticism with an Australian accent