September 22, 2021: Fires of Varanasi: Dance of the Eternal Pilgrim

The Joyce Theater reopened Wednesday night to live audiences and regular seating for the first time since the pandemic. The selected reopening program, presented by Ragalama Dance Company, was an unusual choice for this occasion – but then, the programming choices the Joyce makes are frequently unusual, and more often than not such programs have proven to be valuable additions to one’s performance memories. Ragamala’s program is one of them.

A classical Indian Dance company, Ragamala has been around a relatively long time. It was founded in Minneapolis, MN in 1992 by Ranee Ramaswamy, a native of southern India, presented its first performance in 1994, and has had an extensive performance history since then, garnering an enviable reputation and significant financial support (evidenced by the page-long “commissioning credits” indicated in the Joyce program). My non-extensive research (via Wikipedia) indicates that the company was co-founded by sitarist / composer, David Whetstone, but the company’s website does not reflect this. Be that as it may, Ragamala prides itself on being a female-run dance company. It’s also family-run, led by Artistic Directors Ranee and Aparna Ramaswamy, and includes Choreographic Associate & Director of Communications Ashwini Ramaswamy (mother and daughters). All three are also featured dancers with the company. 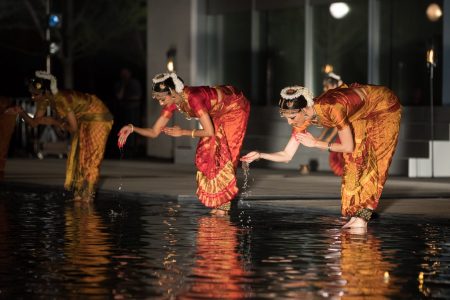 Members of Ragamala Dance Company in
“Fires of Varanasi: Dance of the Eternal Pilgrim”
Photo by Teresa Wood

I’ve not previously seen Ragamala, and I do not consider myself expert in classical Indian Dance, including specifically Bharatanatyam, the form of classical Indian Dance that emanates from southern India and which Ragamala presents. But I have had some prior exposure to Bharatanatyam via the local performances of Preeti Vasudevan and her company, Thresh, on a variety of occasions. Reportedly Ragamala specializes in programming that merges Indian Dance (Bharatanatyam} with contemporary sensibilities, but the program that Ragamala is presenting at the Joyce, Fires of Varanasi: Dance of the Eternal Pilgrim, at least compared to those programs I’ve previously seen, doesn’t provide the same educational or contemporary perspective. It’s very good, but it’s not as accessible to viewers unfamiliar with the style.

That doesn’t make it at all unworthy. On the contrary, from my observation the program was executed with astonishing movement precision. That movement is limited to extensive finger, hand, arm, head, and eye motion, with more limited variation of leg positioning, flat foot movement (more from the heels than from the balls of the feet), and torso movement around positioning planes. This results in, or reflects, a sense of grounding rather than taking flight – which, in a way, makes classical Indian Dance somewhat more akin to American Modern Dance than to Classical Ballet. 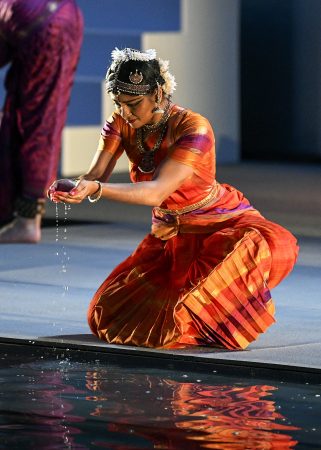 Ashwini Ramaswamy in
“Fires of Varanasi:
Dance of the Eternal Pilgrim”
Photo by Arun Kumar

Without in any way intending to diminish the excellence of its execution, to my eye Fires of Varanasi: Dance of the Eternal Pilgrim is an expanded (and far more rigorous) example of what tourists to India might see if their tour included a performance of “real” classical Indian Dance (or, more generously, if it included an actual local classical Indian Dance performance), albeit on a much higher level. It’s entertaining and exquisitely executed, but it’s somewhat alien – I suppose like classical ballet is to one with little or no prior exposure to it, without any visible emoting beyond the movement itself.

So for me Fires of Varanasi: Dance of the Eternal Pilgrim provided a wonderful but somewhat detached sense of the overall mystical / religious (Hindu) aura of the subject matter as outlined in the program notes, and captured visual bits and pieces that specifically related to what the program notes indicate. But I must emphasize that the opening night audience gave the company a standing ovation at the dance’s conclusion.

Essentially, Fires of Varanasi: Dance of the Eternal Pilgrim, which premiered at The Kennedy Center earlier this month, relates what pilgrims to the Hindu religion’s holiest of sites might experience: that is, what they might see and feel during their pilgrimage to Varanasi (also known as Benares), including the gods and their various incarnations. Instead of going up to Mt. Olympus, these pilgrims go down to the holy Ganges River where they pray and are purified, and over which their cremated remains are scattered. The “fires” of the dance’s title has a dual meaning: the “fires” of lit candles representing the light of the sun and purification, and the cremation fires that burn night and day as the elements of the physical body are dissolved (and taken to a new body), and the spirit joyously transcends. 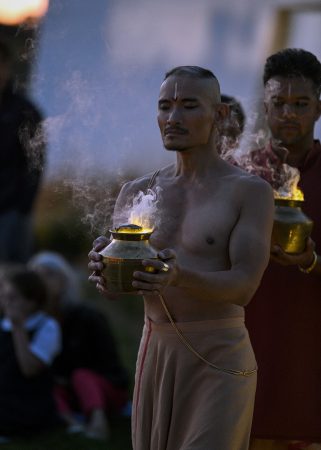 Ragamala Dance Company in
“Fires of Varanasi:
Dance of the Eternal Pilgrim”
Photo by Arun Kumar

As the introductory program note indicates, the dance reflects “a sacred pilgrimage, which seeks the mystical connection between the divine and the human, where ultimately the physical journey transforms into a psychic one.” The dance itself is intended to visualize the components of that experience.

The stage is set like a temple, one of many along the banks of the Ganges River in Varanasi – including specifically Kasi Vishweshvara temple, which is specifically referenced in the program. Rear center stage, overhead, are temple bells (at least two are real, and are rung toward the dance’s conclusion). Under these bells is a series of steps leading down to the visual representation of the Ganges – rectangular spaces, one placed horizontally beneath the steps and two running perpendicularly downstage from each end of the horizontal water space. That’s all there is, but it provides the sense of religious ceremony and event that the dance’s subject requires. [The scenic and lighting design are attributed to Willy Cessa.]

In summary, the dance opens as the fire god (Agni) encourages the sun’s rise over the Ganges, with candles lit by pilgrims floating in the Ganges that celebrate this. As the sun rises, the god Shiva (the “reigning deity of Varanasi”) emerges and dances. Pilgrims watch and purify themselves in the water of the Ganges, which the program describes as the “manifestation of Shakti, the female life-energy of Shiva.” Bathing in the Ganges, the note further indicates, is an essential daily act of the pilgrim, “invoking the water as a giver of life, immortality, and healing.” 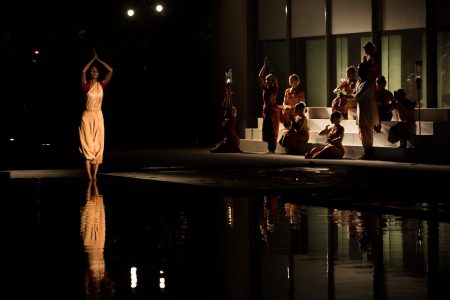 Ragamala Dance Company in
“Fires of Varanasi: Dance of the Eternal Pilgrim”
Photo by Teresa Wood

Where the dance is somewhat confusing to me is in the representation of the various gods and god-manifestations / incarnations whose deeds, encouragement, and presence provide and reflect the power that the Ganges possesses. It’s not easy to decipher who is whom, and what, specifically, each is doing with each gesture. Suffice it to say that many such deities and demi-deities are visibly represented in the dance, but how they actually contribute, beyond what the program says, is difficult to discern in the individual dances that are the pillars of the piece. There are three primary “characters”: Shiva, Shakti, and the Goddess Ganga. The program does not identify which dancers portrayed which gods, and they don’t have clearly defined chronological positions as the dance evolves. My guess is that Aparna Ramaswamy represented Shiva, the character with the dominant role in the dance, that Ranee Ramaswamy represented the Goddess Ganga (the “Mother Goddess”), and that Ashwini Ramaswamy represented Shakti. One other character, Vishnu, an incarnation of Krishna, was powerfully portrayed by Kasi Aysola. All of the women, including particularly the dancers who embody the three goddesses, wear costumes that are both beautiful and extraordinarily detailed, like the dances themselves.

Clearly the three women represent powerful female goddesses, as well as divine beings who visualize the physical form and spiritual blessings of the Ganges: they move fluidly and somewhat seductively, by their gestures collectively representing the Ganges, attracting pilgrims to the Ganges, and directing the pilgrims to purify themselves in the sacred water (which, as the dance evolves, the pilgrims visibly do). Although the specific purpose of the gestures is not always clear, what’s more important in this presentation is the innate power that these goddesses possess. As presented, they’re omniscient and regal warriors of the spirit, the darting eyes seeing everything, their hands, arms and fingers explaining, directing, and seducing, like sirens leading their supplicants not just to a purified death, but to life everlasting.

Aside from the quality of execution itself, what was particularly masterful in this dance – and which is presented almost as a throwaway (you have to be looking beyond the dance’s apparent focal points) – is the visualization of the impact of these goddess representations on the pilgrims. At one brief but significant moment one could see pilgrims gathered upstage left in visible and credible awe at the magnificence they were viewing. This was the expression of emotion that the rest of the dance lacked (intentionally), and seeing it in visual terms crystalized the significance of the event, and of the performance. 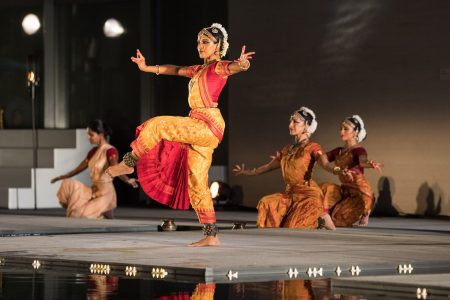 Aparna Ramaswamy in
“Fires of Varanasi: Dance of the Eternal Pilgrim”
Photo by Teresa Wood

All of the dancers executed the choreography, attributed to both Ranee and Aparna Ramaswamy, flawlessly, and without the sense of regimentation that might be found in other dances that require the utmost executional precision. But Aparna Ramaswamy must be singled out. She wasn’t playing a goddess, she was a goddess. Even without understanding all she was trying to communicate, she commanded you to pay attention to her by the force of her presence, not simply because she was the focal point at any particular moment. She was magnificent.

It might have helped if Ragamala had provided a clearer understanding of Hindu mythology as reflected in the dance, and had educated as to the meaning of specific gestures, but, overall, Fires of Varanasi: Dance of the Eternal Pilgrim conveys a mesmerizing spiritual experience. Even without knowing everything there is to know, it is well worth seeing. After it completes its Joyce engagement, it will continue at various locations at least into 2022. Check the Ragamala web site for details.