As its last piece of repertoire this season Boston Ballet offered Rhapsody, a program consisting of “Yakobson Miniatures,” which included Leonid Yacobson’s “Pas de Quatre,” “Rodin,” and “Vestris”; the world premiere of Paulo’s Arrais’s ELA, Rhapsody in Blue; and George Balanchine’s Tchaikovsky Piano Concerto No. 2. In each of the four short pas de deux that comprise Rodin a sculpture came alive to the music of Debussy. The final pas de deux, “Minotaur and Nymph,” as performed by Roddy Doble and Anaïs Chalendard, was electrifying. At first Doble’s striding across the stage toward his partner put one in mind of a Neanderthal, but later he began to resemble a more brutal version of Gene Kelly in “Slaughter on Tenth Avenue” (from the 1948 film Words and Music) or Mikhail Baryshnikov in “That’s Life” from Twyla Tharp’s Sinatra Suite. It was all very much in the French Apache dance tradition.

Completely fearless, Chalendard was willing to be thrown around like a rag doll or twirled, head near the stage floor, while resembling a human surfboard. At the end of the piece she wrapped herself around and descended Doble’s legs like the Siren in Prodigal Son. (Did Yacobson get the idea from Balanchine?) After Doble freed himself from the encumbrance of the nymph at his feet, he raised his arms in perverse triumph over his partner, who lay vanquished in front of him – what a commanding, if somewhat horrifying, example of dance theatrics. 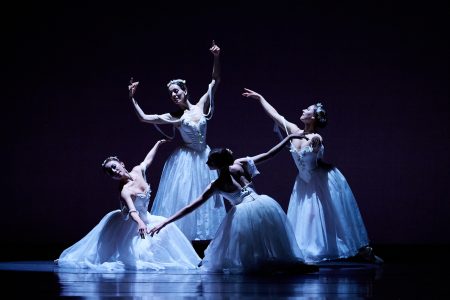 Pas de Quatre seemed to break down into two pairs of dancers, with the more mature pair being comfortable with Yakobson’s style and the younger one having not yet internalized his dance vocabulary. Kudos to Rachele Buriassi and Emily Entingh, who made their variations look fleet, light, and buoyant. 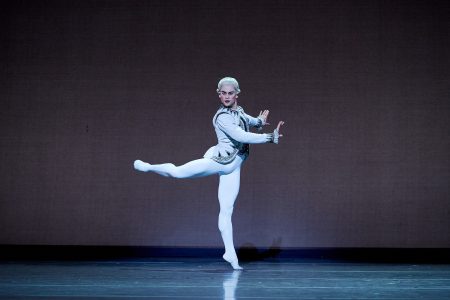 Derek Dunn gave a highly convincing account of Vestris, a piece created for Baryshnikov, but it lacked some of the Russian-born dancer’s intensity. Last month as Frantz in Coppélia Dunn seemed more similar to Baryshnikov, especially in Act III, which is a showcase for bravura dance. Whether shooting like a rocket into the air, where he achieved exquisite positions, or executing mind-boggling spins and turns, Dunn was perfection itself. As Swanilda, Misa Kuranaga matched his every technical feat so that the whole pas de deux seemed like a super-refined game of “Can You Top This?” In such a contest of virtuosi, the audience always wins. 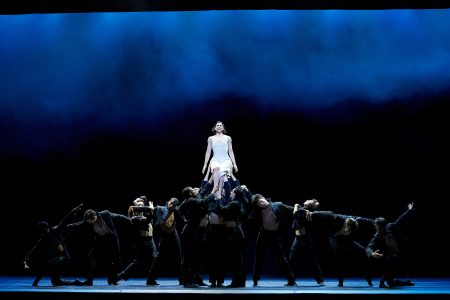 Next on the program was the world premiere of Boston Ballet principal dancer Paulo Arrais’s ELA, Rhapsody in Blue, which he has described as a celebration of powerful women, particularly those who helped raise him in his native Brazil. It featured a corps of 13 men dressed in black and three other characters: the heroine, her lover, and her child. At first the way the heroine related to the corps reminded me of Fred Astaire in “Top Hat, White Tie, and Tails” (from Top Hat), especially when he uses his cane like a gun to shoot his fellow dancers, one by one. Later the scene began to recall Judy Garland in “Get Happy” (from Summer Stock) with a group of men dramatically dancing around her. Whatever its predecessors, the choreography for the men certainly showed the influence of Broadway and Hollywood.

Patric Palkens was the demon lover, a Stanley Kowalski-type who was certainly alluring in a fitted white undershirt and black pants, which set off his panther-like moves. Although technically assured, he didn’t seem to get much of a kick out of being the bad guy (as Cole Porter might have put it). A little more of Marlon Brando’s charisma would have been welcome.

The role of the child seemed to be one that Arrais created with himself in mind, and Dunn’s way of moving recalled the choreographer’s. When Dunn arched his back with his arms thrown behind him, a position reminiscent of Odette in Act II of Swan Lake, he reminded one of Arrais in Wayne McGregor’s Obsidian Tear. Eventually, the heroine’s child grew up, was lifted by the corps, and carried offstage. At that moment Dunn’s posture perhaps foretold the child’s future as a dancer, so it all made sense. 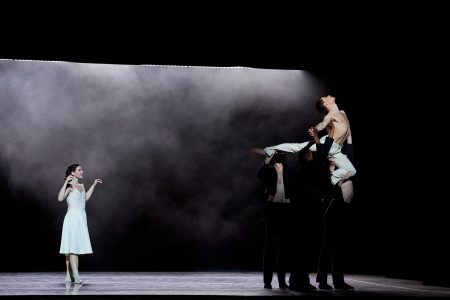 Kathleen Breen Combes’s take on the heroine was somewhat confusing. It was difficult to understand why she kept smiling when what was going on around her seemed to invite a more serious demeanor. At the end, however, the heroine’s victory over the forces arrayed against her seemed well earned. She was a survivor who had a beneficent influence on her child and was finally validated by whatever the corps represented.

In the second cast Rachelle Buriassi told the story a bit more clearly. Although she smiled at the beginning when she was able to control the men onstage with her, she became more somber as she endured not only the abusive behavior of her lover, who left her pregnant, but also a changed relationship with the corps, which became a rather threatening presence. Although at one point the men looked like Carabosse’s malevolent attendants in Sleeping Beauty, by the end they became more benign and lifted the heroine high above the stage, where she appeared to reign supreme.

The choreographer’s use of the music was interesting in that Rhapsody in Blue is usually thought of as a paean to the city where it had its premiere (as was poignantly and hilariously made evident in the opening of Woody Allen’s Manhattan). “Ela” means “she” in Portuguese, and this ballet transformed Gershwin’s urban hymn into the soundtrack of an individual life.  The finale paid homage not to the “rhapsody of laughter and tears” that is the Big Apple (as the song “Forty-Second Street” describes it) but to one woman who lives through and overcomes adversity

George Balanchine’s Tchaikovsky’s Piano Concerto No. 2 (originally titled Ballet Imperial) was the last offering, and on May 19 it starred Misa Kuranaga. I never thought I’d see anything to rival the Theme and Variations she did years ago with Jeffrey Cirio (now principal with the English National Ballet), but to paraphrase The Temptations, ain’t too proud to admit I was wrong. In Tchaikovsky Piano Concerto No. 2, she outdid herself.

Every move she made was so beautifully shaped and connected to what came before and after that by the time she finished, I was stunned by the majesty of it all. My favorite moments happened near the end when Balanchine used Russian folk-dance steps and references. She hit each position with such precision that it seemed as if she was giving a master class in character dance as seen through a neoclassical lens. Kuranaga has to be one of the greatest interpreters of Balanchine on the planet, and it was a privilege, once again, to see her embody the master’s vision.

Her partner was Patric Palkens, who gave an excellent performance in terms of technique. His cabriole leaps and exactly placed landings, his falling to one knee with arms outstretched the better to show off his ballerina were all completed in textbook fashion. Had he looked at Kuranaga as if he were genuinely interested in her, it would have enhanced everything he did.

The music was, of course, top notch, with distinguished guest piano soloists Christopher O’ Riley in Rhapsody in Blue and Alex Poliykov in Tchaikovsky Piano Concerto No. 2. The Boston Ballet Orchestra performed music ranging from Bellini to Debussy, Tchaikovsky, and Gershwin (thank you, principal clarinetist Alexis Lanz for bringing such heat and longing to the opening glissando of Rhapsody in Blue) in a single program. With its flexibility and grasp of numerous styles, it seems that this ensemble is giving the Boston Symphony Orchestra a run for its money as the most accomplished group of musicians in the city.