RIOULT Dance NY returned to the Joyce Theater last week, presenting two programs that together provide a summary of Artistic Director Pascal Rioult’s choreographic accomplishments over the past 22 years. The overall quality of the dances is uneven, but Rioult’s sense of choreographic theatricality, and the talent of the company’s dancers, makes most of them thoroughly enjoyable to watch.

Each of the dances in Program B, presented at Saturday’s matinee, has considerable merit, and Rioult’s Bolero is as unusual and masterful a take on the Ravel composition as I’ve seen. The program deserved the enthusiastic standing ovation it received. The evening’s Program A, however, was hampered by Rioult’s decision to present “real” mythological events in new ways. The urge to artistically address a familiar subject in a different light is not unusual, but here the changes of focus distort, or obscure, the message. 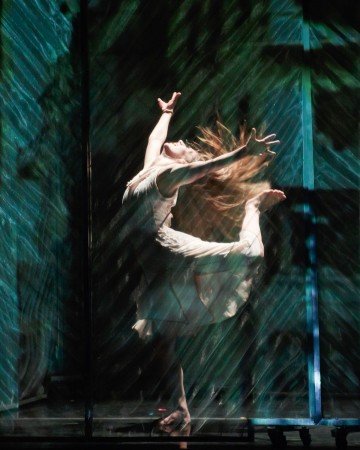 The strongest example is the engagement’s one world premiere: Cassandra’s Curse, the third in the evening’s trilogy titled “Women on the Edge: Unsung Heroines of the Trojan War.” But it holds, albeit to a much lesser extent, for the other two components of the trilogy as well: Iphigenia (which premiered in 2013), and From Distant Shores…a redemption fantasy (created in 2011), which focuses on Helen of Troy.

In Cassandra’s Curse, Sara Elizabeth Seger delivers a stirring portrayal of the ignored prophetess. The opening images of Cassandra’s silent wails are terrifying, and the ignorance of the Trojan people to their impending doom is apparent. But aside from Seger’s stellar performance, the interesting use of ‘cages’ to isolate her and then others (the set is by Harry Feiner), and images of the Trojan Women’s suffering at the hands of the conquering Greeks, the piece lacks sufficient intensity. Having the Trojans ignore Cassandra’s screams while looking askance or sitting in a circle dithering, as Rioult spends too much time doing, may be a way to portray the Trojans’ lack of interest, but it’s uninteresting at best. 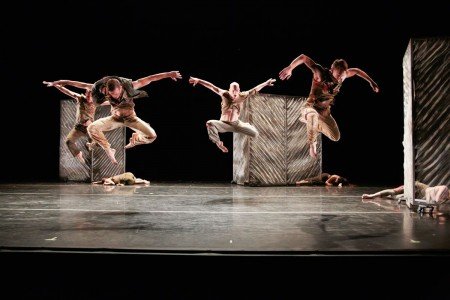 A considerably more serious problem is the attempt to make Cassandra’s Curse ‘relevant’ by using projected images of other conflicts to universalize the dance’s subject, and to relate the transport of the enslaved Trojan Women to Greece (“Asians” transported against their will to Europe, as the uncredited narrative, spoken passionately by Kathleen Turner, tells us) with “Asian” refugees fleeing their homes for better lives in Europe. But the assemblage of unidentified projected photos and videos from more recent wars to show that even today no one listens to modern-day Cassandras doesn’t work on any level other than as a political statement. Extending a historic truth into a universal one is commendable: for example, Alexei Ratmansky does the same with the second component of his Shostakovich Trilogy: Chamber Symphony. But here, it’s from the outside in, and it’s just superimposed paste. 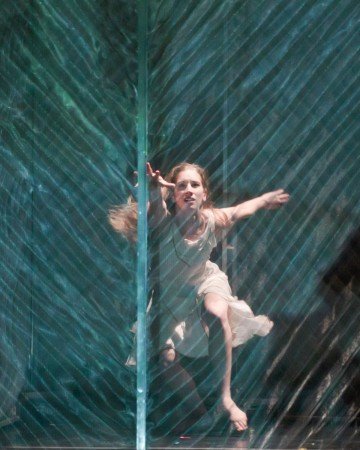 Yet more serious a problem, from an artistic point of view, is that these projected images are dominating and severely distracting. My eyes could not absorb what Cassandra was doing in her ‘cage’ because extraneous images preempted the field. This was an intentional effort to alter the audience’s focus from Troy to more contemporary venues, but it hammers the point home on an anvil, and relegates the choreography and live performances to a secondary position.

On Distant Shores…a redemption fantasy, premiered at the Joyce in 2011. Helen appears on the edge of a body of water, and imagines four representative “Trojan Heroes” whose deaths she mourns. The ensuing images are agonizing and touching as Helen grieves over the deaths she has caused and briefly partners with the deceased soldiers, but she eventually moves on. Although slow-paced, the piece is absorbing and fits the commissioned score by Aaron Jay Kernis like a glove. More significantly, the choreography for Helen is the most ‘Graham-like’ of the three components of the trilogy – the contractions are essential and eloquent punctuations, and even if the overall choreographic variety is somewhat Spartan, it relates Helen’s agony admirably. As Helen, Charis Haines executed Rioult’s choreography superbly, fully delivering Helen’s overwhelming sense of guilt and the emotional power of her pain.

But Helen’s guilt is not what Rioult’s piece is supposed to be about.

According to the program notes, Rioult is using the ‘alternate’ story of Helen referenced in the Euripides play, Helen, as the mythological base for his piece rather than the ‘traditional’ account of Helen’s abduction, or seduction, by Paris. The Euripides play reflects comments in the Histories of Herodotus that Helen never arrived in Troy, but was taken to Egypt following the “Judgment of Aphrodite” by certain of the gods (Athena and Hera, the goddesses who Paris didn’t choose as the most beautiful, and their minions) who were appalled at what Aphrodite had promised Paris, and replaced the ‘real’ Helen with a ‘false’ Helen to goad the Greeks into destroying Troy. Discrediting Helen was just collateral damage.

Rioult also says that he “always felt that Helen was wrongfully accused and have long wanted to redeem her.” So, apparently, as Rioult conceived the piece, Helen’s agony is being displayed from distant Egyptian shores, and is supposed to reflect her heartfelt regret over the Trojan Heroes’ deaths even though she didn’t cause them and they weren’t her fault or responsibility. But assuming responsibility for and regretting the carnage is not the same as seeking redemption for being wrongfully accused. More importantly, this sense of ‘redemption’, or the need for it, is seen nowhere on stage – and Rioult’s suggestion that it is makes what seemed crystal clear become muddy.

Based on Euripides’s Iphigenia at Aulis, the initial dance of the trilogy is staged as a flashback. The audience first sees Iphigenia, danced buoyantly by Catherine Cooch, accepting her fate and being sacrificed. Then the dance goes back in time, depicting the temporal progression from Iphigenia as a young girl playing with her mother Clytemnestra (another fine performance from Haines), to her joy at her engagement to Achilles (Jere Hunt), to the reluctant decision by her father Agamemnon (Brian Flynn) to sacrifice her so that the gods will provide wind for his armada to sail to Troy, Clytemnestra’s rejection of that decision, Iphigenia’s acceptance of her fate, and, again, her sacrifice.

Other than for Iphigenia and Clytemnestra, the choreography is relatively stiff-looking and there isn’t much of it there. But in this setting, that’s not critical – what’s presented is appropriate and sufficient. And the piece does a good job of explaining the situation, relating the characters’ distinctive personalities, and concluding that Iphigenia is a heroine for willingly being sacrificed.

But it’s that last quality that’s counterproductive. In this piece, Iphigenia is a happy little girl, a happy bride to be, and a happy sacrifice. She’s unreal, and her death is as much suicide as sacrifice. (The commissioned score by Michael Torke doesn’t help – It’s simplistic, upbeat, and tinny.) Iphigenia exhibits some degree of reluctance, but not much. And aside from Clytemnestra’s protests, there’s little real dramatic tension here, and no sense of Iphigenia’s hopelessness. (Throughout the pas de quatre of sorts with Iphigenia, Clytemnestra, Agamemnon, and Achilles, I kept waiting for something akin to the tension in Jose Limon’s The Moor’s Pavane to happen, but it never did.) The message is that martyrdom is a good thing, and that Iphigenia is a heroine for not making a big deal of it. It’s not a tragedy, and that’s a tragedy. 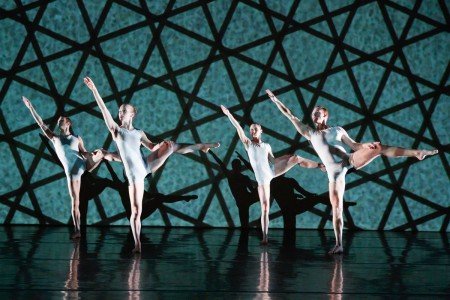 Dealing with simple themes and limited concepts in Program B was more successful. Dream Suite, created in 2014, is exactly as billed. It’s lyrical and balletic, dreamy, obvious, and a little sappy, but that sort of goes with the territory – which the muted, multi-colored costumes (by Karen Young) and the score (Tchaikovsky’s Orchestral Suite No. 2 in C Major) enhance. And Haines, the piece’s ‘dreamer’, again delivers a delightful performance – sometimes with her eyes wide shut in dreamland ecstasy.

The ‘dreams’ aren’t all romantic. Rioult includes a litany of clever dream characters that are at once funny and weird: a woman who can change the position of her separated head; dancers with animal masks, men attempting to scratch each other’s itch. It’s not great dance, but it’s fun.

Polymorphous, which premiered last year, is a concept piece involving four dances (dancing individually or in pairs): Haines, Seger, Flynn, and Hunt. The concept is as simple as black and white. It is black and white. On the rear stage scrim, black, mostly linear forms are projected in certain arrangements against the white background: checkerboard vertical and horizontal line spacing yields to tighter, more claustrophobic spacing, followed by lines that are depicted thicker or thinner or slanted or crossed, which are succeeded by soft curvy shapes, and then by lines that move during the course of the segment. The simple but attractive short unitards are, of course, white in the front; black in the back. Generally, the choreography for the duets reflect the projected background: more angular when the projections are angular, more lyrical when the projections are curved. And although the choreography looks as stark and uncomplicated as black and white, it’s meant to blend in or enhance the background, not to overwhelm it. Although I could have done without the clever shadow images of the dancers that are also displayed on the rear scrim, which is black and white overkill, it’s interesting to watch Rioult’s concept grow, and it’s sufficiently entertaining so that the lack of substance doesn’t really matter. 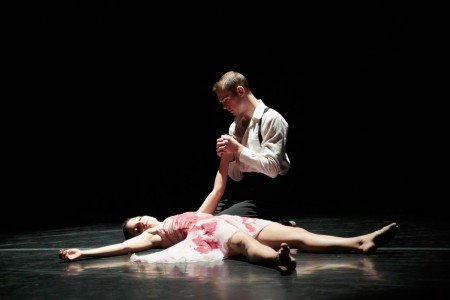 Duets Sacred & Profane is the title given to a series of four duets that are excerpts from larger pieces. In the first, an excerpt from Kansas City Orfeo (1966), Cooch portrays a girl shot dead (the shots are fired as a prologue, as music from Gluck’s Orfeo ed Euridice plays in the background), and her distraught companion, Sabatino A Verlezza, hauls her corpse, complete with blood-stained dress, around the stage. Any resemblance to the final scene in Sir Kenneth MacMillan’s Romeo and Juliet is purely coincidental, but I suspect that Rioult thinks that Kansas City is a hell of a place.

The second, an excerpt from The Great Mass (2009), has Corinna Lee Nicholson and Seger in a rather silly-looking duet to Mozart’s Mass in C Minor. Much more successful was the excerpt from Te Deum (1995), with Hunt and Michael Spencer Phillips dancing unemotionally, but quite spiritually, to Arvo Part’s composition. And Summer Wind, one of the vignettes in Views of the Fleeting World (2008), danced by Haines and Holt Walborn, was both dramatic and expressive, and without melodramatic excess.

The evening concluded with Rioult’s marvelous Bolero, which I’ve previously reviewed. Rioult’s choreography captures and enhances the familiar Ravel score, lets the audience see it in a different and entertaining way, takes risks, and provides a smashing theatrical experience. You can’t ask a dance to provide more than that. And on exiting, I overheard one woman say to another: “My heart was in my throat the whole time.” Indeed.

RIOULT Dance NY: Martha, May, & Me