Fresh from opening its new, and apparently already highly successful, home in Queens, Rioult Dance NY returned to Manhattan for its 2019 New York season last week with two performances at the Ailey Citigroup Theater. The program, based on inspiration from poetry, literature, and film, included The Violet Hour, Transgressions: Four Short Stories, and Nostalghia. All three are representative of Pascal Rioult at his best. 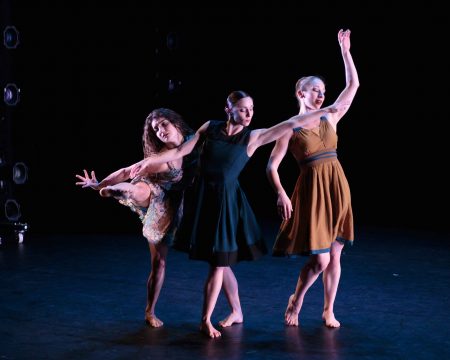 Based on those pieces of his that I’ve seen over the past five years (the company is in its twenty-fifth year; an accomplishment by itself), Rioult’s choreography may initially appear retro, but that’s deceptive. To the extent there’s a “style,” it’s contemporary and physical, befitting a former member of the Martha Graham Company, with, at times, a lyricism that’s rare in contemporary dance. And it’s always unpredictable. A common thread, however, aside from craftworthiness, is that even in an abstract piece nothing is done just to match movement to music, or to create movement for movement’s sake. There’s an intellectual (and creative) point to it all. Rioult doesn’t routinely illuminate music (which would be a laudable goal by itself); more often than not he illuminates emotions. He may recreate a time and a place, but he also creates a mood.

Transgressions, inspired by short stories by Joyce Carol Oates, is an example. These four short dances are not faithful recreations of the Oates short stories that inspired them; they’re faithful reinterpretations. The mood Rioult creates reflects what Oates created previously, but he distills and modifies it, effectively creating a mood of his own. And the music he selected for each of the dances is characteristically, maybe stridently, American. For better or worse, these are American stories. 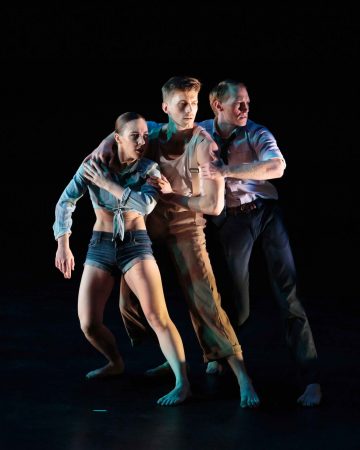 Oates herself was in the audience for this opening night performance, and although you can’t always tell by outward appearance, she seemed pleased – and she subsequently tweeted her high recommendation of the “four fascinating dances,” and her description of the “brilliantly idiosyncratic dancers – riveting to watch.” There’s nothing like a guest critic to bolster your critical credibility.

The stories visualized in the Rioult dances that comprise Transgressions – “The Stranger,” “The Storm,” “Disappeared,” and “Seduced” – each illustrate transgressions committed by one person against another, as Oates did in the source stories. In the first, based on perhaps Oates’s most famous story, “Where Are You Going, Where Have You Been?,” a 1966 short story (choreographed to “Old Folks Gatherin’” from Charles Ives’s Symphony No. 3), describes an encounter among three women and two men. The women (Catherine Cooch, Charis Haines, and Sara Elizabeth Segar) are initially approached by one man (Alexander Druzbanski), who seems attracted to all of them. One of the three women, costumed more breezily than the others (she wears a print dress; the others’ dresses are mono-colored), is younger than the others; and more “breezy.” [In Oates’s story, the other women are the 15 year old girl’s mother and older sister.] Another man (Sabatino A. Verlezza) appears shortly thereafter. While the two more “conservative” women leave with the first man, Cooch’s free-spirited character seems attracted to the arrogant, swaggering, smooth-talking, older man (older is relative), even though everyone in the audience knows he’s dangerous. She leaves with him – although at this point it’s against her better judgment. After disposing of her (offstage), Verlezza’s character returns for more. 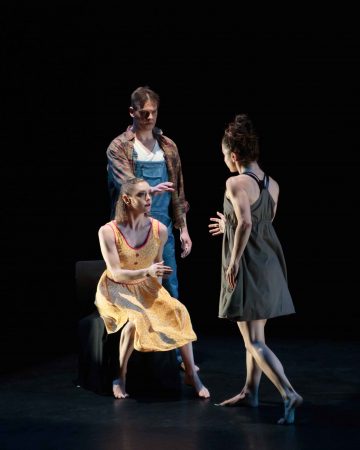 It’s tempting here to blame the victim for her lifestyle and poor choice, but that’s not what the dance (or Oates’s story) is about: deceptive appearances and the cruelty one commits against another for no apparent reason. Oates’s story reportedly was based on a Tucson serial murderer who killed three young women. Cooch’s performance is particularly noteworthy here – and in later pieces on the program as well. It’s rewarding for a viewer, at least this viewer, to see how much she’s grown as a dancer and actor since she joined the company – although my first sight of her was as the victim of a random shooting in Rioult’s Kansas City Orfeo. Plus ca change…..

“The Storm,” inspired by Oates’s “Upon the Sweeping Flood,” has three characters: a young woman (Chaney Briggs), a young man (Christopher Bursley), and an older man (Jere Hunt). [In Oates’s story, the first two are sister and younger brother.] To “Traditional Bluegrass Music,” Rioult presents a horror story of a man encountering the couple as he attempts to escape an approaching storm. They get him intoxicated, and things take a strange, horrifying turn. 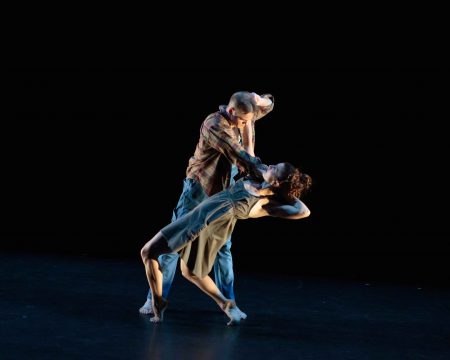 The third story, “Disappeared,” is the most complex of the four, and displays the most violent acts. Based on Oates’s “Faithless” and choreographed to Aaron Copland’s “Prelude for Chamber Orchestra,” the dance describes a relationship that appears to have become a sham. When the “husband” (Verlezza) believes his “wife” (Corinna Lee Nicholson) is having an affair, which may not be true, he asserts his masculinity by beating her, and then killing her and hiding the body – until another woman (Cooch), the wife’s friend (or more than that), discovers the body. During the course of the story, the man assaults Cooch’s character too. Like Oates’s story (which is somewhat different, but touches the same nerves), Rioult distills the relationship, and the male sense of ownership, into its component parts. Verlezza is as good at brainless seething as he is as an arrogant magnet, and Nicholson is very strong as the victim of Berlezza’s brutality. But the piece focuses as much on the other victim of Berlezza’s rage, and Cooch’s performance here is wrenching. 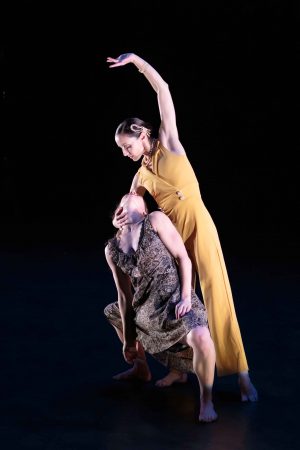 “Seduced,” the last of the four stories, is inspired by Oates’s “The Bingo Master.” To music (not identified) by George Gershwin, the dance features Haines and Seger, with Haines, costumed as a swaggering “male” figure, leading Seger to her doom. Haines is mesmerizing as the female “bingo master,” all glitz, artificiality, and serpentine sensuality that tempts, and destroys its prey.

As was true of Oates’s stories, each of these stories has the common thread of violence and depravity seemingly emerging unpredictably, and from nowhere. But except in a general sense, the violence is not from nowhere, and it’s not unpredictable – and that’s the point (or part of it): that inhuman acts occur is a part of human life, and the dark side of humanity is always there – like the dark side of the moon.

However, I found one tangential aspect of Transgressions world premiere performance to be troubling. In brief advance comments to the audience, Rioult apologetically explained that the brutality illustrated in some of the Transgression stories is not meant to glorify or condone abusive behavior, but to represent the shock and horror one feels when the laws of human interaction are violated – essentially reemphasizing what was already stated in a program note. This should be a “given,” and it’s unfortunate that this is something Rioult felt he had to emphasize – perhaps as a sort of mea culpa, perhaps to avoid streams of critical social media posts – especially since the behavior depicted in Transgressions is neither gratuitous, exploitive, nor intentionally demeaning.

Be that as it may, in its entirety Transgressions is both spellbinding and haunting. 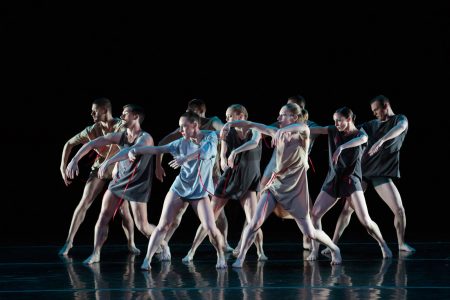 Also haunting, but in a very different way, is The Violet Hour, Rioult’s 2012 dance inspired by the poetry of T.S. Eliot. Here Rioult has conjured an emotional and visual wasteland, but one not without hope.

To two compositions by Joan Tower (Tres Lent and Catching a Wave), Rioult has created two significantly different “landscapes.” The first is a fairly barren expanse, an environmental wasteland through which his ten-dancer cast runs or wanders seemingly aimlessly; the other is a wasteland of relationships, the sense of being in a group but being alone, the sense of isolation. The dance has wonderful imagery throughout, but particularly when the group appears to form some sense of community, and from which springs the hope of something more. It’s a dance of strange but undeniable beauty (with extraordinary lighting by Clifton Taylor) in which the whole is far greater than simply the sum of its parts. 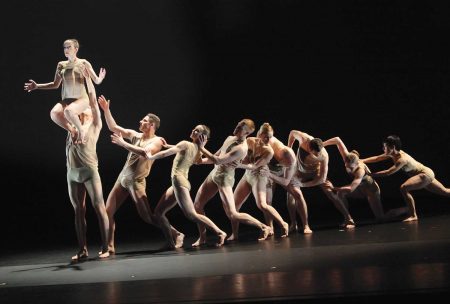 The program concluded with a repeat performance of Nostalghia, Rioult’s sparkling piece from last year’s New York season, which I reviewed following its premiere. Nostalghia (the Russian word for nostalgia) is far more than … nostalgia, and Rioult here captures the creation, the persistence, and the essential emotional need for it in a series of interrelated abstract images that reflect its feeling. As I described last year, Nostalghia isn’t about nostalgia, it’s the sense of it. The mood. And seeing it a second time only reinforced my initial take. Nostalghia is a work of intelligence and sensitivity, and once again Cooch was triumphant as the piece’s initial focus.

I also must again highlight the score. Commissioned by Rioult, Polina Nazaykinskaya’s composition is a rarity: a contemporary piece of music that has a melody (multiple melodies), but also a pulsing rhythm that moves the action forward.  The music and the choreography are in sync, but there isn’t the sense that one is dependent on the other.  They enhance each other. Collaborations don’t always work, but this one does.

The only defect in the program was the space. The Ailey Citigroup Theater is a small gem, but to me these dances needed more room to breathe. But in whatever venue they choose, I’ll look forward to seeing RIOULT Dance NY’s next annual New York season

RIOULT Dance NY: Martha, May, & Me