RIOULT Dance NY’s annual New York season at the Joyce Theater this year, under the overall title “Written for Dance,” was conceived, according to the program note, as a celebration of the “historic connection between choreographers and composers.” While that’s an admirable subject, the music for the first piece on the program wasn’t written for dance. But that’s the only questionable note in what otherwise was an interesting and enjoyable program devoted to Russian composers who composed for dance, with choreographed examples of their work spanning three artistic periods: Tchaikovsky and romantic Russian classical ballet; Stravinsky and the avant-garde period of the Ballet Russes, and a piece by a Russian contemporary composer, Polina Nazaykinskaya.

I’ll consider them in reverse performance order, because although Dream Suite is unusual and enlivening and Les Noces is a new (at least as of its premiere in 2005) take on one of Stravinsky’s most famous ballet scores (with an iconic ballet to match, choreographed in 1923 by Bronislava Nijinska), Nostalghia, the ballet to Nazaykinskaya’s composition, both of which celebrated their world premieres during this engagement, is the most significant.

To my knowledge, Nostalghia (the Russian word for “nostalgia”) is a true collaboration between Nazaykinskaya and Pascal Rioult, the company’s Artistic Director. RIOULT Dance NY commissioned it, Rioult provided the subject he was interested in exploring, and Nazaykinskaya created the score, which was modified with input from Rioult in collaboration with the composer as work on the dance progressed. All that isn’t unusual for a commissioned piece. The result, however, is perhaps more successful than most. 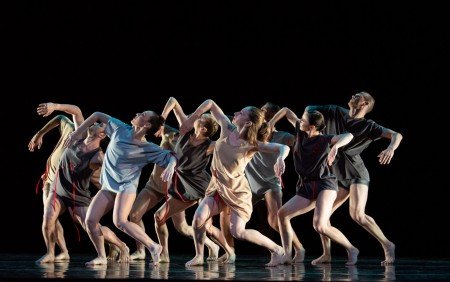 Although they’re integrated, the musical composition can be (and I suspect will in the future be) considered on its own. So I’ll address that first.

I don’t consider myself a musical authority, but to my ear, Nazaykinskaya’s composition is an extraordinary piece of contemporary music. Although there are moments that seem unusually jarring (possibly added to make a choreographic statement), this is a quality composition that doesn’t fall prey to any current orthodoxy.

Others may disagree, but to me being able to listen to a piece of contemporary music without squirming or being overwhelmed by technique or that is different just for the sake of being different (regardless of its standalone merits) is refreshing. It has a melody (multiple melodies), but Nostalghia is not retro: it’s thoroughly contemporary with a pulsing rhythm that moves the action, both musical and choreographic, inexorably forward. And the sound is big – even though it was performed by a live septet, it sounded orchestral. [With Nazaykinskaya herself conducting, the seven musicians were Konstantin Soukhovetski (piano), Julian Milkis (clarinet), Regi Papa (violin I), Nikita Morozov (violin II), Will Curry (viola), Ani Kalayjian (cello), and Alexander Bickard (double bass).] Hearing their execution of Nazaykinskaya’s composition was a rare treat.

Most significantly, Nostalghia isn’t program music – there’s no “narrative,” actual or constructive. Rather, to the extent the title is the composition’s subject, it creates a mood. Rioult’s choreography does the same. It’s abstract with non-specific reference points, but that doesn’t mean that it’s without substance. Nostalghia isn’t about nostalgia, it’s the sense of it. The mood. And it doesn’t have a central character – it has three of them, all affected by remembrances of things past, real or imagined, which are important more for their being recollected memories than for what they’re memories of. If you try to assign specific meaning to each part of the dance and each of the three lead dancers – that is, if you get mired in detail, as I initially attempted to do as reflected below – you risk losing what’s important. 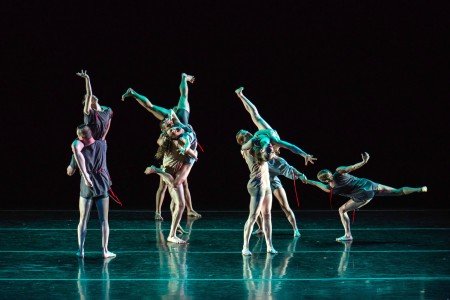 The dance opens with Catherine Cooch as the focus of attention downstage, and groups of the nine other dancers gathered upstage right (three women), center (one man; one woman) and left (three men; one woman). I assumed, perhaps wrongly, that the center pair were Cooch’s character’s parents, and that the others were groups of siblings or acquaintances or changing combinations of them. Eventually, the focus shifts to Charis Haines (initially part of the group upstage left) and then to Jere Hunt. If there was a connection between or among them, that was not a significant factor (I thought perhaps Haines was an “adult” version of the diminutive Cooch, and that perhaps Hunt was Haines’s companion, but neither of those initial impressions was substantiated as the dance progressed).

By far the most distinctive image in the piece is, as I recall, during the period when Cooch is the focus, when the assembled dancers form a compressed vertical column (neither a gymnastic/ cheerleader human pyramid nor a Pilobolus-type exercise in balance and weight shifting) as if to illustrate that an individual’s life is built on memories of, and maybe nostalgia for, predicate events in one’s life and the people in them. That sounds trite, but the image is a powerful one: a tower on which character is built remembered image by remembered image, brick by nostalgic brick. [I also thought I saw an evanescent reference to Cooch seemingly connecting with Haines atop the column, as if denominating Haines as her successor focus or adult form, but that too may have only been my attempt to create something intellectually concrete that wasn’t really there.] 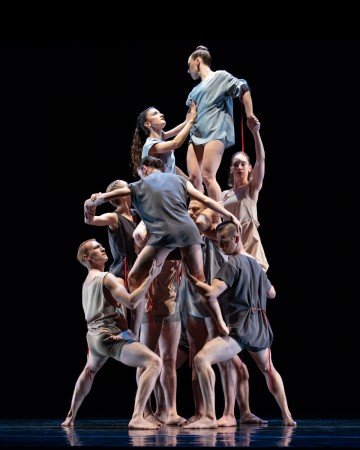 Of course, nostalgia is more than a memory or collection of them; it’s an ache to be bathed in; to take shelter in, to be ratified or measured by – and it doesn’t matter whether the “specific” memory that the nostalgic feeling is associated with is positive or negative, or even if it’s real or imagined. The good old days may not have been so good. Aching for them provides both a distraction and a comfort, as well as a weight.

Rioult picks up on this. The events he portrays – to the extent they can be seen as events – are not always happy. I saw evidence of rejection (whether parental, siblings, or friends, or some amorphous combination, I couldn’t tell); of unpleasant memories that hit a nerve. But that didn’t matter nearly as much as the sense of yearning for them, and being formed by them.

And the style – of having non-specific images that are representative of a mood, in this case nostalgia, reflects another inspiration for Nostalghia. Rioult has indicated that in creating Nostalghia he was inspired by “the spirit of the work” of Russian film director Andrei Tarkovsky. I’m not familiar with Tarkovsky’s work, but he’s been compared to Ingmar Bergman, who gives Tarkovsky, who died in 1986 (of lung cancer, but rumors persist that he was assassinated by the KGB), high praise. Bergman is quoted as saying: “Tarkovsky for me is the greatest [of us all], the one who invented a new language, true to the nature of film, as it captures life as a reflection, life as a dream.” 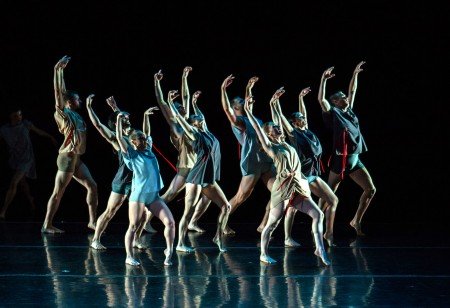 One of Tarkovsky’s films was titled Nostlaghia. It doesn’t appear to have a direct reference to Rioult’s dance, but the spirit is there. And one of Tarkovsky’s books is titled Sculpting in Time. That stylistic spirit is there too. What Rioult and the company’s dancers (and Nazaykinskaya’s composition) accomplishes is sculpting in time, both musically and choreographically, and, as Rioult quotes Tarkovsky in a program note, visualizing a sequence of events that slip and vanish “like sand between the fingers, acquiring material weight only in its recollection.” 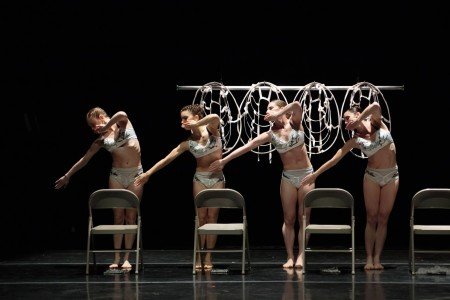 Rioult’s version of Les Noces is similar to Nijinska’s (and Jerome Robbins’s iteration of it, which I recently saw for the first time), in that it’s representative of a wedding (or weddings). What’s important – perhaps more so in Rioult’s version than in others – is that the true meaning and significance of Les Noces is preserved: it’s about the sex – either real or imagined; the ceremony is only … ceremony. And it’s very clever.

There are a few things about Rioult’s Les Noces that I didn’t get. For example, is one couple being wed, or multiple; do the characters have multiple partners, or one? But these concerns aren’t of crucial importance – what is significant is how Rioult puts it all together into a coherent, idiosyncratic, and marvelously stylized whole. 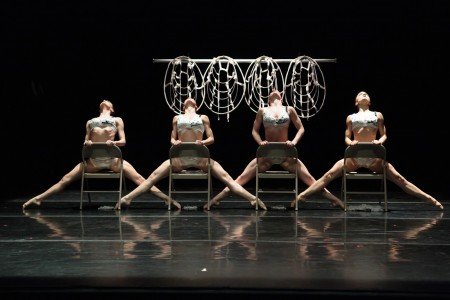 With Stravinsky’s portentous score as an ambient background, the stage opens to a row of four chairs upstage right (facing toward the back wall), and four more upstage left. Further upstage from each row of chairs is a open-screen “wall” on which objects are hung.

The initial focus is on the chairs upstage right, and the four occupants: four women wearing adorned, stylized undergarments (these are costumes – designed by Pilar Limosner – not underwear). They dance individual and collectively of sexual yearning (maybe “coming-of-age,” but that’s not the focus). Eventually, the women return to their chair positions and begin putting on mini-slips and corset-like tops – and the audience realizes, if they hadn’t already, that the women are dressing themselves in preparation for an event, and that the objects hanging upstage from them, which had initially appeared to me as rope (as in – to be bound to someone in marriage), were really the skeleton framework for elaborate hoop dresses (wedding dresses). The scene then shifts upstage left, where four shirtless men are seated. When they stand, they’re wearing black briefs. They also do an hormonally-infused dance, and put on pants when the dances end. Eventually, the four pairs meet, pair up, and the dances become more clearly sexually charged, until, at the dance’s end, the women put on their hoops, the men their black tux jackets (which had been hanging on their “wall”), and one of the four couples is presented for the ceremony. 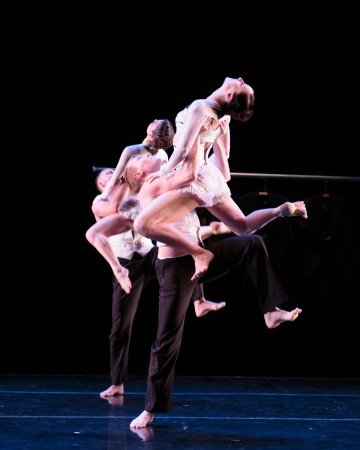 This brief outline, however, fails to do the dance justice. Essentially, while maintaining the form of the Stravinsky score, Rioult turns the original Les Noces on its head – or maybe inside out. The resulting presentation is neither salacious nor gratuitous, but it emphasizes what Les Noces, the words, mean. I don’t pretend to be a linguist, but the meaning, as I understand it, isn’t so much the marriage as a ceremony, but the union; the coming together; the mating. Of course, this is the theme underlying the score and “standard” versions of the ballet – it’s the reason for the wedding, and the requisite culmination of it. And whether the sexual liaisons that Rioult’s version references represent actions that take place prior to the ceremony or after, and whether they represent “real” actions or pre-nuptial fantasies, it’s the union that’s significant, not so much the ceremony that validates/sanctifies it.

In any event, I found Rioult’s Les Noces to be fascinating, independent and original. The cast (Cooch, Haines, Nicholson, Seger, Columbus, Hunt, Phillips and Verlezza), even through the stylized choreography, was compelling. 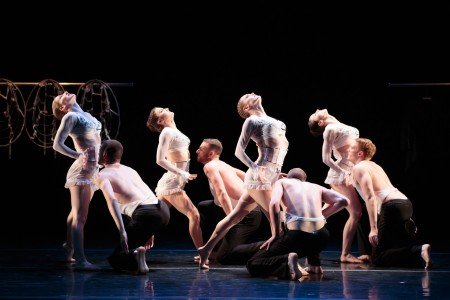 I reviewed Dream Suite, which opened the program, in a review of the company’s 2016 annual Joyce program, and commented on it favorably then. As with Nostalghia, Dream Suite sets a mood. In the generalized opening segment, the mood is lyrical but agitated and a bit strange, as if setting the groundwork for the more detailed expressions to come. In subsequent segments, things get more quirky, as the “dreams,” become specific images, and the viewer is transported to a Chagall-like artscape in which long-beaked crow-like birds, a horned bull-like animal, a disembodied head, and a woman seemingly “floating” in midair materialize as in a dream reverie. [The costumes were by Karen Young; the masks by Anne Posluszny.]

Led by Haines, the ten dancer cast seemed to have as much fun dancing it as the piece is to watch (and not only from surviving the stifling headpieces). And it set the appropriate tone for the balance of the evening to come.