More than anything, the performance by EVIDENCE, A Dance Company at the Music Center at Strathmore was about heart. The three works presented, New Conversations: Iron Meets Water (2018), Walking Out the Dark Act I (2001), and Grace (1999/2003), surged with feeling. In the opening piece, New Conversations: Iron Meets Water, the dance company was joined onstage by the Arturo O’Farrill Ensemble. O’Farrill, a pianist and composer, is also the founder of the Afro-Latin Jazz Alliance. O’Farrill’s music, specially commissioned for the work, alternately intensifies and softens. The dancers expertly animate this pulsing force. The costume design by Keiko Voltaire, mainly deep blue flowy fabrics edged in beige gold or greenish gold, captures bursts of sun and sky. At times different sounds come to the forefront (O’Farrill on piano, Mayu Saeki on flute and bonsuri, Earl McIntyre on tuba, and Carlos Maldonado and Victor Pablo Garcia-Gaetan on percussion). So, too, the dancers take some solo turns, acting as physical accompaniments to the music. It’s easy to get lost in the continually swirling liveliness.

The idea of contrasting iron and water is embodied in the movement, which includes strong yet bouncy stomps; pliable torsos; an arm stiffly reaching into the air at a sharp angle, then gracefully swooping; a hand shaking at the neck as if fluttering an invisible fan. A glance around the audience revealed some tapping toes and heads moving back and forth in rhythm. Ronald K. Brown’s choreography, paired with this passionate music, makes one want to move. The clarity and purity reflected in the music and movement sparks not only appreciation for their shared African roots, but also joy in the vitality of humanity that both evoke. 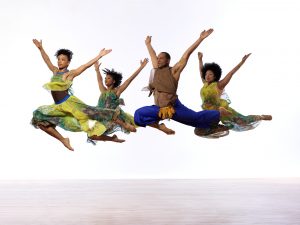 Walking Out the Dark Act I strikes a completely different tone, yet it also brings to mind the human condition. Rather than elation, Brown’s Walking Out the Dark Act I delves into grief and disconnection. It begins with text by Brown. When the lights come up, there are four figures (Arcell Cabuag, Aliyah Etheridge, Annique Roberts, and Keon Thoulouis) standing far apart facing the center of the stage, all with bent heads so that their eyes are on the floor, not on each other. There’s a subtle glow around each dancer (lighting design by Brenda Gray). The dancers wear simple sleeveless costumes in shades of earthy brown (costume design by Carolyn Meckha Cherry). At first, the two women across from each other have some kind of conversation through movement. One stands watching while the other fervidly pleads her case. Then the pair of men engage in the same ritual, witnessing and “speaking.” All four end up on their backs, knees up, staring at the ceiling. Then, like boxers, they retreat to their individual corners, ready for another round.

Elbows tucked like chicken wings flap and shudder while the partner opposite stands unmoving. A trio later emerges in which three dancers perform the same movement in unison, jagged ups and downs of hips, feet, and arms, like puzzle pieces resisting fitting together, while the fourth dancer, solitary, stoically observes. Subsequently, two dancers facing each other, with hands behind their backs, bend forward and join the tops of their heads. What is restraining them? Are they separated by unseen walls? Are the dancers mirror images of the same person?  Is one a ghost, a shadow, a family member (the introductory text mentioned a brother and sister)? I’m not sure of the overall message, but I felt hope amidst the heaviness and pain. This deeply artistic piece is as beautiful as it is thought-provoking.

The final work on the program was Grace, an uplifting piece originally choreographed for the Alvin Ailey Dance Theater in 1999, which became part of the EVIDENCE repertory in 2003. The program notes provide that “Grace weaves the story of a goddess’ journey to Earth to spread grace among humans, ultimately welcoming them to heaven.” There’s no question that Annique Roberts is a goddess. She steps onto the stage from a shaft of ethereal blue light appearing in a gap between thick black curtains (original lighting design by William H. Grant, recreated by Brenda Gray). And she’s wearing all white. A wispy translucent rectangle of fabric hangs down the front of her costume (costume design by Omotayo Wunmi Olaiya).

Roberts was not only a goddess in Grace, her superb dancing dominated the other works as well. She moves with incredible smoothness and sensitivity, making her presence felt in every moment. Her boundless energy and elegance stands out, even amidst a company composed of other very fine dancers.

The music for Grace ranges from Duke Ellington, to Roy Davis, Jr., to Fela Anikulapo Kuti. Grace seems like a modern-day fairytale, a combined love story and a sacred story  with some club dancing thrown in the mix. When the dancers who had been wearing bright red change into white, it’s not hard to guess they’ve made the transition to heaven. But the dancing is heavenly throughout, and the abandon with which the dancers move is transcendent. There’s solemnity and also grooving spirituality. In this battle for souls, jumps soar weightlessly, but dancers also place their hands on the stage’s surface  as they crawl low to the floor. In a sequence reminiscent of a martial arts routine, a line of male dancers use their hands to chop, kick their feet up to their noses, and then bow. Once in heaven, the dancers seem to go beyond just dancing. They’re finally released, simply enjoying the sublime, arms flying and bodies spinning, even hugging.

Ronald K. Brown’s unique blending of traditional African dance and contemporary dance is lovely to behold and offers a potent emotional experience that shouldn’t be missed.