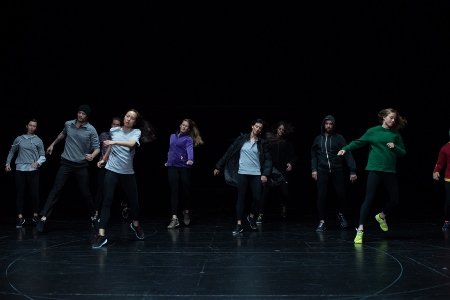 Anna Terese De Keersmaeker has a well-deserved, stellar reputation in the contemporary dance world. Works such as Fase and Drumming are masterpieces of the late 20th C. repertory and I never tire of seeing them. In addition she is the founder of P.A.R.T.S. in Brussels, generally regarded as the best contemporary dance school in Europe. I remember seeing a breathtaking performance of Drumming by final year students from P.A.R.T.S., which received an instant, standing ovation – not so common in Europe.

Keersmaeker is always keen to experiment with new styles and although this can be rewarding, it can also backfire, notably with her I Said I, a flirtation with Tanztheater, which ran for 2½ hrs without a break and appeared on lists of the worst shows of the year in London. Golden Hours does not fall into that category, but neither is it one of her best.

Based on As you like it and featuring some of the text projected onto the back wall, the production unfolds on the barest of stages with the dancers dressed in modern casual garb that might be from a charity shop. Lighting is almost unchanged throughout and provided principally from a 60’s style industrial lighting rig stretching out over the first few rows of the auditorium; it has one major advantage – we critics could see our scribbled notes for once.

As the show opens we hear a Brian Eno song, and as it ends and then starts again the dancers move forward in mesmerising, slow steps, which continue for a further two repetitions of the song. Much of the show is in silence with more of Eno’s ambient music from time to time. After the introduction, we move to the court with a wrestling scene and the banishment of Rosalind played in a convincing way by Aron Blum – many of the characters are cross gender, echoing the cross dressing of the original play. 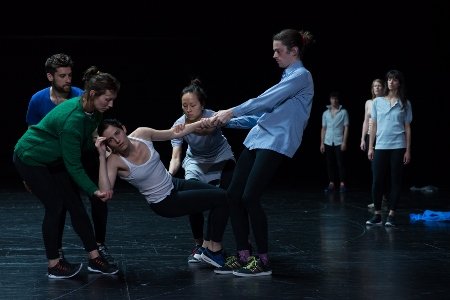 The strongest aspects of the production are the quality of the dancers, all trained at P.A.R.T.S., and the choreography with a full use of the body, turning, bending in off-centre motion, gesticulating and moving to and from the floor with ease. But even these virtues began to dim after an hour and at 90 minutes straight through, I felt 20 minutes could be dropped quite easily. Further, the lack of differentiation between many of the characters and the repeated running around also eroded my attention. Nevertheless, Georgia Vardarou as a Shepherdess, was always eye-catching with her quick, elegant movement and Sue Yeon-Yung as the Jester had distinctive, comic steps and made the most of them.

Apart from the main characters it is not always easy to identify who is who, despite a synopsis in the handout. One enthusiast of As you like it told me of their frustrations because of the deviations from the spirit of the original play: Golden Hours cuts most of the humour, the idyllic life in Arden is difficult to detect and the uplifting ending falls flat in this transposition. Overall, despite the strength of the dancers and Keersmaeker’s movement, Golden Hours fails to reflect the virtues of the original or to create rewarding new perspectives.