It is safe to say that no dance work comes near to Rosie Kay’s 5 Soldiers in understanding what it is to be on the frontline. For sheer physical effort and sense of camaraderie it is second to none. Dance often has an uneasy relationship with the military where dancers are cleaned up as Graduation Ball cadets or cute toy soldiers in The Nutcracker. Yet it seems so right to express the soldiers’ commitment through dance, the art form most pervasive to our human way of being. Dancers understand the necessity of rank and file discipline, the gruelling hours of drill/ rehearsal, the total commitment to the cause and that adrenaline rush that gets you through exhaustion and pain. 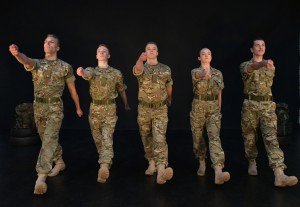 At this Yeomanry House performance, set in a territorial army hall, the five soldiers were reduced to four due to an injury identified only hours before the show. It was a tribute to the high professionalism that the show in no way suffered and the added level of uncertainty injected in this very physical work of tumbling and falling bodies, only increased the thrill.

What Kay’s work brings to the fore is the presence of the individual in the corps. The first section – was drill, text book accurate with every boot in unison, but in the next section, off duty, each soldier becomes a distinct personality and a different world is revealed.

The single female character, played by Harriet Ellis, opens a whole raft of gender issues. These were at times predictable, as she constantly feels the need to prove her worth and be at least as tough as the guys. But left alone in her tent she indulges in a very girly cloud of talcum powder, strips down to athletic underwear and embarks on a sensual dance, an interesting mix as she delights in her own strength and flexibility laced with a touch of tease and a somewhat ambiguous message to the men.

The second half takes us into combat as whirling helicopters, free fall and skirmishes are enacted in dappled light, a barrage of sound and movement that captures the intensity of the conflict. The quartet bristling with tension work as one, running, firing and grouping in authentic battle formation. 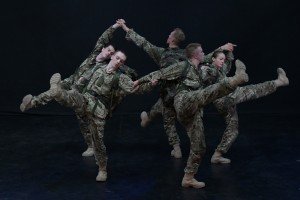 The power of this production is Kay’s choreography that packages the energy, the thrill and the fear in a compact knot; like a hand grenade ready to explode. There are no high-tech gizmos, few theatrical devices and an audience just metres away. As it says on the tin: this is the body on the frontline.

Troops trained to this level are a powerful weapon of both defence and aggression. The extremes of toughness and discipline are in evidence but the moral issues of war: the unacceptable level of civilian deaths and injuries, and the destruction of other cultures, remain outside the scope of this production. However, it does not avoid the price the soldiers pay in injuries. Of the three men, Luke Bradshaw, Reece Causton and Duncan Anderson it is the latter who draws the short straw losing both legs and writhing in pain. His is the most subtly drawn character, seen from the outset, as a little more aware and more sensitive. His legs shackled in braces, he angrily deals with the despair and frustration before marching forward on his stumps, a different but stronger man.