Under the artistic directorship of the former étoile of the Paris Opera Ballet, Nicolas Le Riche, the Royal Swedish Ballet delivers unique performances that transport this national stage into the global arena. The production Kylián/Ek/Naharin exemplifies this vision. The virtuosity of Sweden’s world-renowned Mats Ek is flanked by the artistry of two foremost international choreographers. 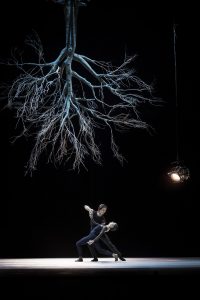 The evening’s mixed bill at the lavish Stockholm Opera House began with Czech choreographer Jiří Kylián’s Wings of Wax, first performed by the Nederlands Dans Theater in 1997, when Kylián was the company’s artistic director. The ballet’s exquisite precision in movement vernacular gives life to the myth of Icarus, who tries to escape from Crete with wings of wax and feathers. They melt as he flies too close to the sun, causing him to plunge to his death in the sea. The dancers masterfully re-enact Icarus’s flight through a balletic horizontality that runs throughout the piece. In solos, duets and trios, they stretch out vigorously across the stage only to break their horizontal reach by bending inwards. Variations in this corporeal motif replay the collapse of outstretched wings and the consequent loss of freedom and life. The fragility of the human body emerges.

Michael Simon and Kess Tjebbes’s evolving lighting stands in for the cruelty of the sun, spotlighting the dancers and their metaphoric demise. The dancers ignore the menacing rays in the same way that they seem dispassionate towards one another. A dearth of emotion abounds. Towards the end, male dancers coldly lead female partners in their steps and turns. The last duo repeatedly holds one another, hinting at a final shared intimacy. But the dominance of the male dancer penetrates their grasps. He pulls the woman towards him before each embrace. The exactitude of his manipulative touch controls the female body and even insinuates violence. 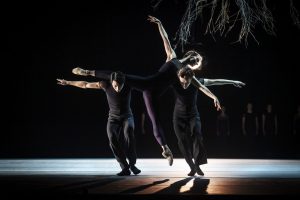 This dark ballet is performed beautifully by the dancers, who match their steps perfectly to the eclectic musical score of Heinrich Biber, John Cage, Philip Glass, and finally J.S. Bach. The sombre tone resonates with a bare tree that is hanging upside down, its gnarled roots visible, designed by Michael Simon. A murky teal and faded violet luminosity radiates from the tree. It looms above the dancers as they are entangled in its hued reflection on the ground. Bleakness emanates from the unassuming sleek black costumes by Joke Visser. They flicker inky blue and deep purple in the stage lighting. In step with Kylián’s characteristic approach, attention is given to human form rather than decorative dress. The essence of movement, specifically its tragic side, is the focus.

The gloomy atmosphere switches to playfulness during a quirky interlude that augurs the last piece of the evening, Israeli choreographer Ohad Naharin’s Minus 16. Dressed in the same costume – a black suit and white shirt – that Naharin will use in his piece, the charismatic soloist Hampus Gauffin delights the audience at the intermission with his funny facial expressions and frenzied jazz-imbued twitches. 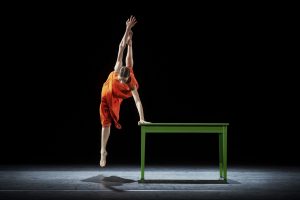 Up next is Mats Ek’s ten-minute esoteric premier Woman with Water, inspired by two earlier works, Wet Woman (1996) and Place (2008), a pas de deux created for Mikhail Baryshnikov and Ana Laguna. With a haunting presence and technical flair, Daria Ivanova performs the lead character of the Woman. She pieces together Ek’s signature moves: deep pliés in second position, strong lunges, slightly hunched backs and flexed joints. In thrilling moments, her jagged isolations and loose spine reshape into endless flow and grace. Ivanova soars impressively in the air with swirling leaps, emboldened by the billowing of her orange dress, designed by Ek. 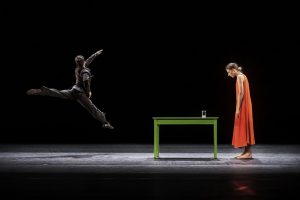 The meaning behind the Woman’s actions is uncertain. She is at odds with objects that puzzle and disturb her in the set created by Ek. At one point, she pulls the green table with a bent foot; at another moment, standing with a curved back, she stares forebodingly at the glass of water on the table. She is cool and distant with the Man, performed with elegance and vigour by Dmitry Zagrebin, who comes on stage after her. Objects and people appear to be as scattered and decentered as the Woman’s gestures and expressions. Ivanova captures the meshed disconnection of the atmospheric and discordant score by the Swedish band Fläskkvartetten. Mesmerizing melodies ring out from steady lyrical percussive beats, sharp electronics and static noise.

Women with Water seeps into Minus 16, which was originally mounted in 1999. Rows of dancers dressed in business attire, as Gauffin was during the prior intermezzo, fill the stage. The Woman falls under their onslaught and dissolves from view like running water. Her role as the protagonist in Ek’s enigmatic tale vanishes as she metamorphoses into a disappearing prop for the final piece. 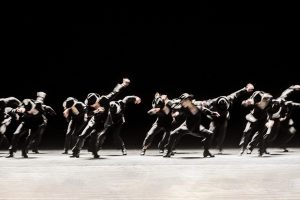 Then twenty-one male and female dancers stand in front of chairs arranged in a semicircle in Naharin’s set design. They are dressed alike in Naharin’s black suits, white shirts and black hats to evoke this time a traditional orthodox Jewish male dress code. A magnificently commanding rendition of the song Echad Mi Yodea, by the Israeli rock band Tractor’s Revenge and Naharin, is blasting. Typically performed by children as a cumulative song, this Passover celebration of freedom marks the Israelites’ exodus from Egypt.

This chant becomes a heart-pounding, poignant, cumulative dance. The links in a chain of compelling gestures pile up on top of the previous ones. With splendour and swagger, the dancers synchronize these repeated moves to enact a potent gestural call for liberation against injustice. In a beginning position repeated throughout, the dancers violently lean back one after another. It is as though they have each been singled out and shot. The iconic photograph of Robert Capa’s The Falling Soldier (1936), taken during the Spanish Civil War, vividly comes to mind. Bathing physicality with fluidity, the dancers commandeer Naharin’s singular Gaga technique, which he describes as using one’s flesh to grab one’s bones.

Near the end, the dancers remove a piece of clothing one by one and throw it. Their jackets, shoes, shirts and pants accumulate in a pile in front of them, evoking WWII photographs of mounds of the clothes and shoes of murdered concentration camp prisoners.

An upbeat score with sounds ranging from Latin big band to techno resets the mood. The triumph of freedom comes through in the joy of improvisation. At one point, mostly women members of the audience, who have been preselected, are invited onstage by the dancers. With their lack of expertise, the participants turn the choreography into a mass of unglued and messy cha-cha-inspired duos. Humour and fun take over as professional dancers lead the novices in partner dancing. Dressed in male attire, both men and women from the troupe play the traditional male role of leader of the pair. The authority of women is symbolically eclipsed by a costume hiding the female form behind a male guise. A masculine edge simmers within the celebration of dance’s emancipatory potential.

Shattering the divide between the performers and the public electrifies the theatregoers. The roar of their cheers resounds as the energized participators leave the stage and return to their seats.

It has been a wonderful evening for the audience. They give the Royal Swedish Ballet dancers a well-deserved standing ovation. Yet I feel somewhat disappointed. Female agency has been eroded in each piece. Within this outstanding showcasing of three eminent men, a woman’s choreographic perspective might have let the power of feminine corporeality prevail.