Sweden does Christmas brilliantly, blending snowy landscapes with Nordic and Christian traditions and now Pär Isberg’s Nutcracker is becoming a fixture in the Yuletide calendar. Developed freely from Elsa Beskow’s Petter and Lotta Christmas and E.T.A. Hoffman’s tale, the ballet celebrates its 300th performance in January, playing, as ever, to full houses. The designs replicate Beskow’s book illustrations, as popular in Sweden as Enid Blyton in England, and guarantee a nostalgia rush. 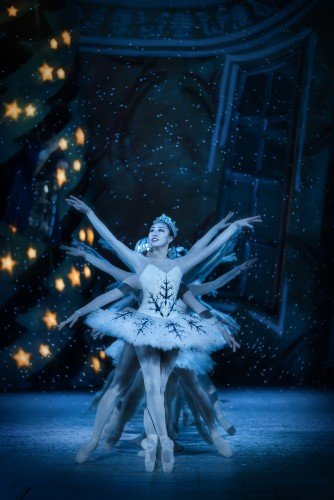 The setting is domestic but far from orthodox as the two orphan children are adopted by three eccentric aunts and on Christmas Eve are entertained by Uncle Blue. The magic is diffused in fanciful ways, it is the children’s friends, the house maid and charcoal burner, who are transformed into the ballerina and cavalier and the divertissement are danced by the Christmas tree ornaments neatly avoiding the current concerns of cultural appropriation. 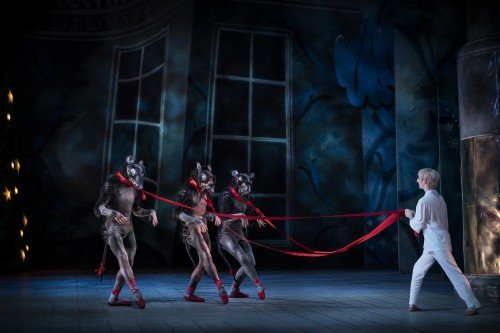 Dancers of the Royal Swedish Ballet in “The Nutcracker”
Photo: Markus Gårder

The humour works on many levels exemplified in Petter’s dance with three harnessed mice, captured from the earlier battle. The combination of the Mirleton’s music, hairy chests and pointe shoes gets the giggles but for the sharp eyed there are shades of Balanchine’s Apollo and his three muses. And I’m sure I spied a hint of Massine’s Tales of Hoffman, in the three sleep-walking aunties who drift through the languorous Arabian dance.

Luiza Lopes, as the house maid, is the model of brisk efficiency in Act One. In the kitchen scene it is Lopes who bats the rat and later comes to the rescue in the dream scene to dispatch the larger, fiercer variety with a smack of her broomstick. In this version there is no visit to distant foreign lands and the snowflakes simply fly in through the open window. They create their magic in the transformed living room in intricate patterns of crystalline sparkle led by a vivacious Madeline Woo. Right on cue the housemaid dispatches the last wayward flake out the window then comes into her own when her drab coat, cap and broomstick are whisked away to reveal a princess figure in glittery dress.

Jérémie Neveu and Alessa Rogers as Petter and Lotta are fully part of the action. They bound through the two acts alive to every moment stretching their dance and dramatic skills to encompass the fun, the danger and the fantasy. In the divertissement the spicy Gingerbread pair, Kaho Yanagisawa and Hiroaki Ishida, were a treat in their racy duet while Christmas crackers, Snowmen and Candy Sticks all have their moments. 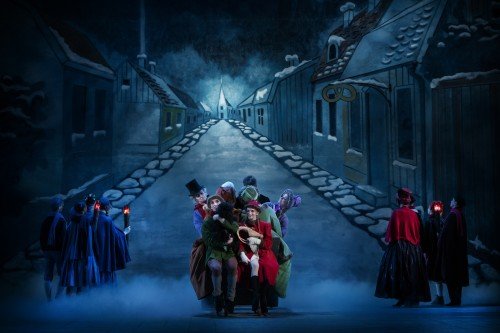 Dancers of the Royal Swedish Ballet in the final scene of “The Nutcracker”
Photo: Markus Gårder

Dragos Mihalcea was a dynamic Uncle Blue. He charms the ladies at the Christmas party and although upstaged temporarily by the real Julbok (Christmas Goat) he proves his worth as the master of magic once he dons his silver cloak. Dawid Kupinski as the Charcoal Burner/ Julbok and Prince develops from an amiable and unprepossessing character to excel in the grand pas de deux. Tchaikovsky’s music for the duet is some of his finest and Isberg’s choreography doesn’t disappoint, softening the aristocratic formality while matching the music with soaring lifts and moments of sublime beauty and tenderness. Lopes and Kupinski do it justice. The magic of the dream partnership comes down to earth in the final scene as maid and woodsman sit side by side in the departing sleigh heralding a blossoming romance. Isberg’s Nutcracker with its gentle charm, delightful choreography and witty narrative is a winner in a crowded Christmas market.

Pacific Northwest Ballet’s Nutcracker: It All Adds Up