I took a break from my summer dance viewing vacation to see Analog 2 by S. J. Ewing & Dancers led by Australian born Director/Choreographer Sarah J. Ewing.  I didn’t see Ewing’s Analog, so I can’t say if her new work Analog 2 resembles it or is an improvement upon it. I suspect, however, that because she calls Analog 2 a sequel, there must be a close connection between the two pieces. Certainly they both deal with the topic of technology. If you can imagine combining contemporary dance with thumping techno club beats and swirling black and white projections that look like artsy screensavers, then you can probably imagine Analog 2. Is it a winning combination? As a whole maybe not, but parts are intriguing.

First, the music. I wanted desperately to stop the heavy repetitive bass booms (there was a lot of this). I know Ewing isn’t choreographing for my specific taste, but to make it enjoyable for me, I’d cut that “music” out. On the other hand, there were sections of Analog 2 that were accompanied by strings. Ah, strings! This served as a striking contrast, and those strings were a welcome relief. I could actually concentrate on the choreography more when the strings emerged. The dancing seemed to slow down then, and I felt less distracted.

Speaking of distractions, the projection design by Jonathan Hsu and Dylan Uremovich was brilliant. The cool, cutting-edge projections could easily constitute an art museum installation. I could sit for hours and simply watch circles widen, wavy lines pulse, grids bubble and blur, and star-like constellations scatter. But I’d frankly prefer to watch in silence, without the dancing. 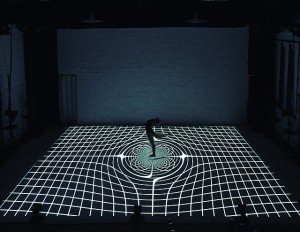 The projections combined with the music and dance made for a sometimes frustrating experience, often visually striking but aurally punishing. As a dance critic, my eye is drawn to movement, but with the spinning and growing projections, my eyes had too many places to go. A lot of the dancing was lost to me amidst the wrapping paper of the projections. I’m sure Ewing intended some amount of disorientation on the part of the viewer. In one section, dancers were almost completely camouflaged, their skin seemingly tattooed in zig-zags like zebras. It’s hard to discern movement in that context. I don’t mind a few sight gags — the effect of dancers fading into the background was clever and fun. The problem, for me, was that the dancers consistently had to compete for my attention with the patterns hovering around them.

The costumes were appropriately plain and spare. If the dancers had been clothed in all black, with long sleeves and tights, their shapes would have stood out more forcefully. Some dancers, though, wore light colored tops or were without sleeves or covered legs, and the pale surfaces became additional screens for the projections. Under these circumstances, I frequently strained to see the nuances of the choreography. I did make out an abundance of leg lifts and kicks, straight lines and pointed toes extending away from the body. Much of the dancing seemed to share the same tempo, moderately languorous stretches and steep leans backward and forward. I didn’t sense any focus or oomph in the mainly lyrical and introverted movement. I think there may have been some truly nice moments of dancing that I missed because I was either mesmerized by the projections and wasn’t attentive to the dancing, and/or because the projections actually obscured the dancing. 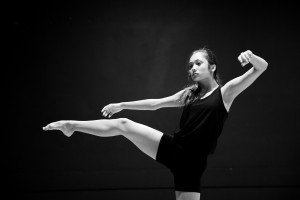 By far the most successful moments of Analog 2 were the solos and duets. I was likely able to appreciate the solos and duets more as there were fewer bodies in the space to comprehend. When the music offered was the smoother sound of strings and the projections were smaller and simpler and isolated to the stage floor, I could finally really see the dancing. In particular, a solo by dancer Abby Farina stole the show. Finally, I felt the power of dance. Finally, a dancer’s personality broke through and caught fire. Someone in the audience murmured, “Wow.” Yes, wow! Bathed in red light, Farina kept her back to the audience. She was riveting. Her arms reached backward, stretching awkwardly yet beautifully like a baby bird’s unfurling wings. Here Analog 2 captured me. Here was the human in an inhuman world.

The other three dancers, Columbian born Juliana Pongutá Forero, Nicole Liebeler, and Kyoko Ruch, did a fine job, too. Overall, I’m not sure Ewing’s choreography and artistic direction showed them off at their best. The dancers generally seemed distant, cold, alienated. I suppose this was intentional to some degree. Technology has a way of magnifying loneliness, and it’s possible Ewing aimed to convey that emotion. Yet it’s challenging to watch an evening length work full of dancers who seem so remote. My heart lifted when I noticed a pair of dancers touch. I hoped Analog 2 was going to take a turn. But the touching, unfortunately, was fleeting. I also especially liked when the dancing coincided with the projections, when the geometric figures seemed to be guided by the dancers, when the sweep of a foot appeared to result in the blossoming of light. Ultimately, however, Analog 2 didn’t build toward anything. Instead, the ending was surprisingly abrupt and disappointing.

I do applaud Ewing’s selection of collaborators. The projection designers, as I’ve mentioned, were outstanding, and the dancers were lovely as well. And in the few solos and duets, Ewing’s choreography surged. I think if Ewing steps back a bit with her choices and produces something a little less heavily adorned, Analog 3, if there’s a trilogy afoot, might be a bigger hit.