The Print Room at The Coronet
London

Saburo Teshigawara’s distinctive work has garnered for him a worldwide reputation as a dancer, choreographer and teacher. It was noteworthy at the opening night of The Idiot that so many of the celebrated names of the London dance world were in attendance. In 2013, Teshigawara founded Karas Apparatus a combined studio, gallery and performance space for up to 60 attendees with post performance discussions part of the routine. It was there that The Idiot was first performed in 2016 and it is fitting that his first visit to England with this production should be in the intimate setting of the Print Room.

It’s confession time: I haven’t read Dosteovsky’s The Idiot, but a quick look at a plot summary was helpful before the performance. The novel, considered one of the author’s finest, charts the life of Prince Myshkin, a young man who has spent several years in a sanatorium and as a result is awkward and inexperienced in dealing with his peer group. Although possessing intelligence and high moral principles, he is sometimes called an idiot by those who do not see below his surface.

We first see Teshigawara framed in a pool of flickering light, standing with knees slightly bent, expressing his vulnerability. As he depicts Myshkin’s physical disability, his movement quality is arresting – a whole body experience with hands, arms and legs apparently with a life of their own as he move with staccato rhythms. In another section, Myshkin’s illness is portrayed with Teshigawara’s hands fluttering like frantic butterflies. 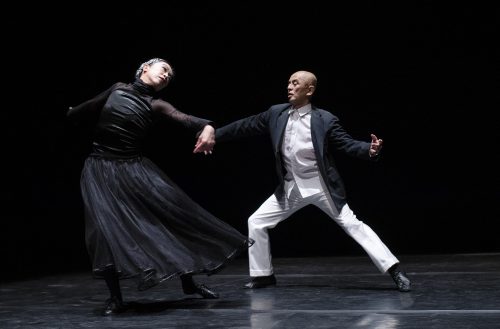 Teshigawara is partnered by Rihoko Sato, playing the role of Nastasya. She is an elegant and precise dancer and we see Myshkin immediately enthralled by this vision. Their duets see Myshkin dancing in his most integrated style, but in her absence he reverts to the earlier, awkward, hectic style.

In the novel, Myshkin is betrothed to Nastasya and on their wedding day, his best friend runs off with bride to be and then kills her. The murderer invites Myshkin to visit and after seeing the body, the Prince descends into madness. On stage, we merely see Nastasya’s body stretched out, which would have lacked resonance for anyone without a knowledge of the tragic circumstances of the original plot. However, Myshkin’s anguish is movingly portrayed by Teshigawara, collapsing onto the his knees with his legs splayed out in hopeless despair. 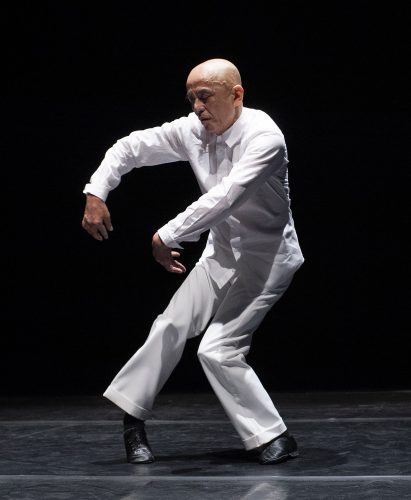 Saburo Teshigawara in The Idiot
Photograph by Elliott Franks

Overall, Teshigawara and Sato present snapshots of the huge novel with imaginative choreography. I have one caveat: Teshigawara’s disturbed dancing does becomes repetitive and even at only one hour, the performance would be stronger with a 10 minute edit.