It’s been a great treat having San Francisco Ballet back in London with no less than twelve commissioned works, all from the past decade. Programme D kicked off with Christopher Wheeldon’s Bound To, an exploration of the impact of technology on our lives: creating isolation and a dissociation from the beauty of the world around us. The choreographer is previously on record celebrating the introduction of new movement but also the virtues of classical pointe work. Thus it was a surprise that throughout Bound To the women are all on demi-pointe, a first from Wheeldon. This switch seems to have freed him, resulting in innovative and compelling choreography. 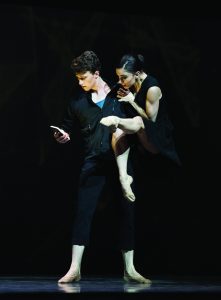 Initially we see a group of individuals entranced by their phones, ignoring their companions and periodically displaying anxious movement. A series of vignettes follows, enlarging on the work’s themes. In the gently humorous but melancholy Open Your Eyes, Benjamin Freemantle constantly returns to his screen, largely ignoring the attempts of Dores André to focus on their relationship. There are memorable moments including André stretched over Freemantle’s kneeling figure, entranced by his screen. In Remember When we Used To Talk, Dores André and Sasha De Sola seem to look back to a happier period with tender holds and supportive movement.

At the opening of Take a Deep Breath, Yuan Yuan Tan walks across the stage eyes down on her tablet only to have it snatched away by a figure from the wings. The ensuing, loving duet to birdsong presents a convincing alternative to the isolation of technology. Finally, in Trying to Breathe, Lonnie Weeks is in animated despair, jaggedly rushing around the stage. Other characters come and try to comfort him, but when he eventually collapses, they move away. One woman looks back, wondering if she should help, but then turns away to focus on her phone – a downbeat end to this impressive addition to Wheeldon’s portfolio. 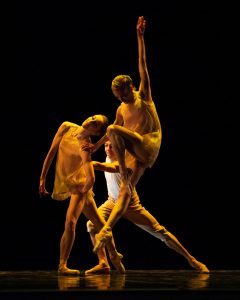 San Francisco Ballet in McIntyre’s Your Flesh Shall Be a Great Poem
Photo: Erik Tomasson

The programme notes tell us that Trey McIntyre’s Your Flesh Shall Be a Great Pleasure had a double genesis: a 1920’s photograph of his grandfather, Benjamin, and a solar eclipse in San Francisco; the idea being that the lunar, sun line up creates a portal through time to open and close the work. While I didn’t find the link up convincing, the eclipse images are gorgeous. McIntyre has much fun with scenes from Benjamin’s life – first with his friends and then the women competing for his attention. In the closing scene, Benjamin Freemantle gives vivid expression to his namesake character’s confusion and anguish as he grapples with dementia, including a riveting image of the old man swimming or drowning stretched out over a stool. 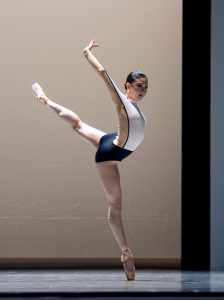 David Dawson’s Anima Animus is inspired by Carl Jung’s use of the terms to describe the male aspect of the female psyche and its inverse. The result is a kinetic work with costumes in black and white mirror imaged for the two genders. The women have a romp with animus, roaring onto the stage throughout with arms stretched upwards and dominating the virtuoso lifts and spins. The anima for the men was less clear, apart from a supporting role allowing the women to excel. While the work provides an exciting vehicle for San Francisco’s excellent dancers, I found the 30-minute work unrelenting in its high pace, driven by Ezio Bosso’s frenzied score. 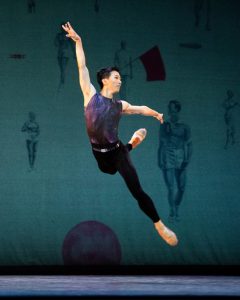 Looking back over the four programmes presented by San Francisco Ballet, some highlights emerge. From Ratmansky’s Shostakovich Trilogy, Symphony #9, depicts the regimented life in the Soviet Union and forceful commitment to party conformity, contrasted with a haunting duet, the characters looking over their shoulders for informers. Wei Wang is electrifying as a maverick figure, jumping and spinning. I suspect President Putin, keen to restore Stalin’s image, would not approve.

It was my second time seeing Liam Scarlett’s “Hummingbird” and it remains one of my favourites from his repertoire. Built around three varied relationships, the central one is the most remarkable, with a troubled Yuan Yuan Tan resisting the concerned approaches of Luke Ingham. At one point, they slowly back across the front of the stage, with a small turn of Tan’s head conveying the depth of her melancholy. Throughout the visit, Tan underlined her status as a technical and expressive marvel.

Helgi Tomasson has lead SFB for 34 years and has a deservedly high reputation for developing an outstanding company with an extraordinary record in new commissions. Two additional points I appreciated: Tomasson is a fine choreographer himself, but decided not to feature his own work on this visit – I wonder how many director/choreographers would do the same. For each performance we not only get the names of the designers, but also the organisations responsible for the construction of the sets and the costumes – a well deserved tribute. My only complaint is the seven year wait we had to endure before this visit. Come back soon, ya hear?