San Francisco Ballet’s Program B, consisting of three more of the original Unbound ballets, didn’t delight me as much as Program A, but I still left the theater feeling refreshed. Much like in Program A, the night opened with a huge orb on the scrim at the back of the stage. In Edwaard Liang’s The Infinite Ocean, a large orange sun (or planet maybe) hovers behind the dancers. Long heavy rectangles of wood, three per side, hang like shelves, floating in the space adjacent to the wings. The very back of the stage ramps upward. Composer Oliver Davis’s score rivets. Martin West expertly conducted, and Cordula Merks captivated on violin.

Bare-legged dancers in shiny gold costumes with high necks designed by Mark Zappone move organically like flowing liquid. I recall having seen a Liang work in which female dancers squat low to the ground, in second position, en pointe, and I saw that challenge here, too. Dancers cross arms and fit hands into hands like human puzzle pieces. They often circle, ducking a head under another’s arm. In the air, tossed women flip like ninjas or ninja weapons, arms and legs spinning like a pinwheel. In the end, dancers move over the raised edge at the back of the stage and disappear, letting go of one world and traveling to another. The Infinite Ocean, which the program notes explain is about love and death and letting go, is a handsome, deeply moving work, and it’s thought-proving as well. 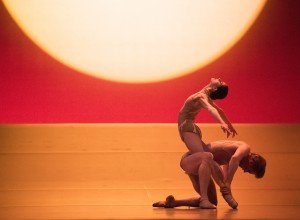 Although I had read a review of Cathy Marston’s Snowblind, the title didn’t stick with me, and I didn’t immediately recognize it as the ballet based on Edith Wharton’s novella Ethan Frome, which I was forced to read in high school. I did immediately discern, though, that the ballet centered on marital discord and illicit love. I didn’t guess correctly that the women and men in soft gray/brown represented snow, and that they also played neighbors and farmhands. The group functioned like a Greek chorus of sorts, or just helped to push the action along. Patrick Kinmonth’s costumes and stark scenic design (a chair, benches, and elevated platform with a bed) are effective in their minimalism, allowing the focus to remain on the movement.

Sarah Van Patten made an excellent Zeena, Ethan’s sickly wife. She strongly and clearly danced her role as the frail, cold, and angry partner of Ulrik Birkkjaer’s Ethan. San Francisco Ballet should be pleased with the addition of Birkkjaer, formerly with the Royal Danish Ballet, as a principal dancer last year. I can envision him being stunning in many other lead roles. In Snowblind, he skillfully portrayed his character’s conflicting emotions and danced with intense passion. Mathilde Froustey made a wonderful Mattie Silver. In a reddish pink dress, she was girlish, with emotional highs and lows to match those of the man who dangerously falls for her. The ballet ends with a weirdly disturbing trio. Birkkjaer, Van Patten, and Froustey formed a circle with joined hands, pulling this way and that, in a three-way tug of war. 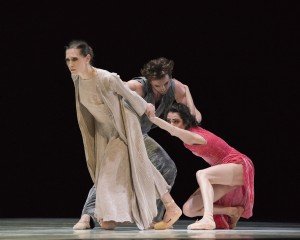 Justin Peck’s lightweight Hurry Up, We’re Dreaming came last. It’s an upbeat romp. I was reminded of the 1980s TV show Fame about a high school for the performing arts. Somehow, the dancing felt overly enthusiastic and forced, the dancers too inexplicably giddy and competitive, the costumes shiny, tight, and young. This sneaker ballet (the dancers wore white sneakers) is high energy, but not highly inventive. The dancers jog a lot. Supposedly about dreaming at different stages of life, beginning with childhood, I didn’t catch on to the transition to mature adulthood. It all seemed like child’s play to me. I tired of the bouncy cuteness, the striving for cool and chic moves versus choreographic substance. There was more drama in the faces of the dancers than in the movement itself. Hurry Up, We’re Dreaming seems recycled and hastily put together, and it doesn’t rank among Peck’s best works. 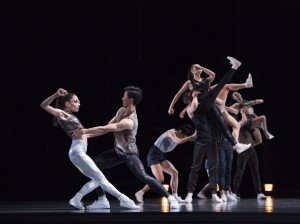 Program B featured more variety in the choreographic styles presented, and it was nice to see a female choreographer represented, but Program A turned out to be the winner. I’m sorry that I didn’t get to see all of the new works from Unbound. San Francisco Ballet was only able to bring half of them. I’d love to see the other half one day!