Ask any school-aged child about their current extra-curricular classes or the camps they attend over summer vacation – the sheer volume and variety is certain to astound. Ceramics, coding, debate, organic gardening, disc golf, cello. The seemingly endless list of possibilities grows every day. And yet, some of the traditional favorites always seem to remain popular among the group. Like soccer, piano and ballet. It is to this last option, the recreational pursuit of classical dance, that Melissa R. Klapper looks in her new book, Ballet Class: An American History, available now from Oxford University Press.

Ballet Class is a thoroughly delightful and informative read – a well-rounded study that looks at ballet class through several different lenses. For dance history buffs, significant attention is paid to the early days of ballet class and the events that drove its rise and popularity. From the establishment of the big schools like Metropolitan Opera Ballet School and the School of American Ballet to the historic touring artists who introduced ballet to a wide audience in the States to the different ballet traditions and forms that were brought into regional and local studios from other parts of the globe. I particularly enjoyed Klapper’s comment on page sixty-five that, “No given technique was necessarily superior.” I wholeheartedly agree, but wonder if today’s teachers (and those from decades past) would concede or insist that their syllabus is the best!

Twelve impeccably researched chapters (plus extras), Klapper’s investigation does not shy away from the tough issues and heavy realities of ballet class. She tackles its lack of racial diversity, gender stereotypes and imbalances, implications of visibility, sexuality, the socio-economic realities of participation and the tension between it and modern dance. She delves into individual personhood, suggesting the different internal truths that might linger in the psyche after time spent at the barre. Both positive and negative. Certainly it is a space that can spur concentration and discipline, encourage artistic expression and nurture joy of movement but sadly, at the same time, can simultaneously give rise to body dysmorphia and condone infantilizing interactions.

Ballet Class is an academic book to be sure, but has a very approachable style. The prose isn’t full of seven-syllable words, something commonly found in similar studies. And Klapper’s writing is very conversational – throughout Ballet Class, you feel like you are having an in person dialog with her. The only thing missing for me was a bit more attention to the general structure as well as thorough descriptions of the exercises that make up a typical ballet class. Yes, there is an early chapter (entitled Ballet Class 101) that has some of this information, but seeing as how the entire book is dedicated to ballet class, a more detailed illustration seems like it would be an appropriate, and helpful, addition. 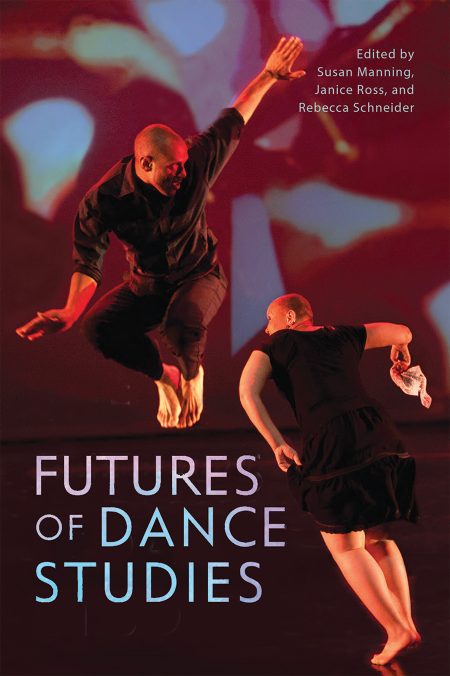 I wonder if this is true for others, but when I encounter a large dance text – the kind with a multitude of articles by different writers – I admit that I rarely read the whole thing. Rather, I focus on the introduction, and then randomly select a few articles to get a general sense of opinions, arguments and observations that the book posits.

I employed this same approach with Futures of Dance Studies, a new volume edited by Susan Manning, Janice Ross and Rebecca Schneider and published by The University of Wisconsin Press – a book whose subject matter interests me greatly. While I applaud the scholarly work coming out of graduate dance programs and faculty research projects, much of the academic material I encounter borders on unapproachable. Articles with heavy, impenetrable titles. Book after book that could have a wider appeal, but instead, feel stylistically bound to dense, overly lengthy prose. I can’t help but feel that this fosters an unnecessary distance between the academy environment and the performative community.

Having said that, I was heartened by the three articles that I chose from Futures of Dance Studies. Each one was an interesting, provocative, academic study, no question. But the trio was very readable at the same time. And balanced. Qualitative research, especially that which only references one or two case studies, can so often be plagued by issues of selection bias and a lack of contrast space, issues which these articles were able to avoid. Speaking of selection bias, my own that is, I did steer clear of articles with stiffly intellectualized titles, of which there were several. You know the kind I mean. The ones where the (hopefully profound) thesis is so buried in fancy wording that it gets mostly, or sometimes entirely, lost.

Without a doubt, today’s global health crisis was on my mind when deciding upon Laura Karreman’s Breathing Matters: Breath as Dance Knowledge. Contemplating how breath relates not only to dance performance but also to the field of dance studies, the article is clear and compelling. Karreman begins by providing theoretical background/framework – citing a diverse group of artists, creators, philosophers and technicians. Next, she takes on a host of ideas relating to the breath. She explores the mind-body connection of breath and cognition, breath’s inherent egalitarianism, the link between breath and control and how the experience of breathing can be shared in the performance arena. Karreman goes on to discuss how many mid-twentieth century modern dance techniques were uniquely rooted in the breath, offers a case study of Anne Teresa De Keersmaeker’s My Breathing Is My Dancing (2015) and spends ample time discussing new technology being used in performance and dance practice to measure breath.

I chose Daniel Callahan’s Accent, Choreomusicality, and Identity in Rodeo and ‘Rōdē,ō for a number of reasons. First, the source material was definitely of interest: Agnes de Mille’s Rodeo (1942) and Justin Peck’s Rodeo: Four Dance Episodes (2015). Second, while very distinct ballets (created in different centuries), both are set to the same Aaron Copland score, making them ideal candidates for a comparative study. And last, both works are part of San Francisco Ballet’s repertory library, so I’ve been fortunate to see each onstage.

Callahan’s is a wonderful article, rich with analysis. Observations about gender norms and sexuality pepper the riveting discussion, as do thoughts about narrative themes and choreographic abstraction. I particularly enjoyed his commentary of how works that are dubbed ‘abstract’ are still imbued with ample tone, mood, atmosphere and influence. But the most intriguing was when Callahan took a deep dive into how de Mille and Peck approached Copland’s evocative score, specifically their treatment of the Corral Nocturne’s 5/4 time signature. What kind of tension emerges when there are five beats in every measure? Or perhaps that final fifth beat allows for space, breath and vulnerability? For readers who are dance and music fans, Accent, Choreomusicality, and Identity in Rodeo and ‘Rōdē,ō is a fascinating read.

With respect to the final Futures of Dance Studies article I’ll discuss, think about a dance performance you recently saw. Then, consider the individuals who brought that artistic idea to fruition: the choreographer, collaborating dancers, designers, composer, répetiteur, dramaturg. Though really, that is only a partial list. In her article, Who Makes a Dance? Studying Infrastructure through a Dance Lens, Sarah Wilbur reminds the reader of the realities of artistic creation. That all work is truly birthed by a complex and varied ecosystem that is a dance company, a dance entity or a dance organization. Certainly by those in the studio, but equally by a myriad of others. By the grant specialist, the programming directors, the operations manager, the rehearsal accompanists, the box office staff, those who coordinate summer programs and many more. While some of these individuals may seem far away from the performance arena, Wilbur shows, through her important and penetrating study, that they are keenly involved in the process of dancemaking.

Who Makes a Dance? Studying Infrastructure through a Dance Lens pairs theory with an in-depth case study of Washington DC’s Dance Place, a dance non-profit founded more than forty years ago by Carla Perlo and Steve Bloom. Wilbur chronicles Dance Place’s financial journey, including its relationship with various funders, grants and foundations; Dance Place’s search for adequate, affordable physical space; its engagement with the community; the stories of continuity that have marked its past four decades as well as a nod to the next chapter. And in Who Makes a Dance? Studying Infrastructure through a Dance Lens, Wilbur does not shy away from the more challenging aspects of her exploration. She asked tough questions throughout, acknowledged that much more research should be directed towards the topic of dance infrastructure and invited her colleagues to join this needed conversation. 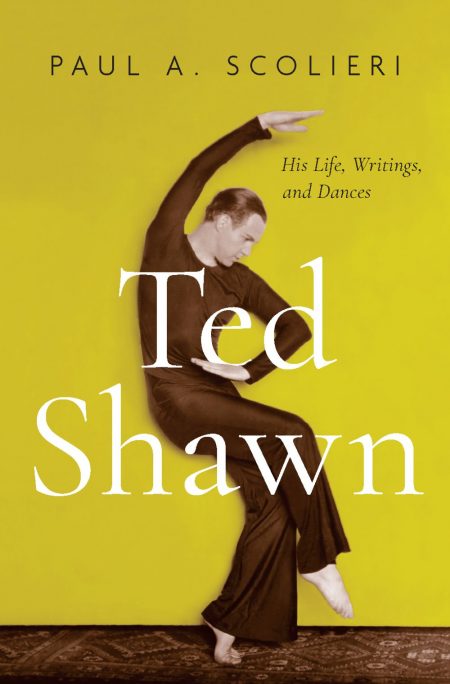 Ted Shawn: His Life, Writings, and Dances
by Paul A. Scolieri

Historical dance accounts and biographies always leave me with a question – how would this journey (whether of a person or an entity) be different in the present day? Would the famed Judson collective have been possible with 2020’s financial realities? What if Balanchine had arrived in the States in this century rather than in the last?

I definitely had this same feeling as I read Paul A. Scolieri’s magnificent new book, Ted Shawn: His Life, Writings, and Dances, published by Oxford University Press. Impeccably researched, incredibly detailed and super approachable, Scolieri’s addition to the existing scholarship on Ted Shawn (1891-1972) is real and thorough. It attempts (and succeeds) to fully share the dance icon’s personal and professional story, one that Scolieri notes had long been purposely self-edited. He explains during the introduction, “…what made it difficult for Shawn to tell his story was that he was homosexual…he remained closeted in most of his autobiographical narratives…” (p. 2). When referencing One Thousand and One Night Stands, Shawn’s 1960 autobiography, Scolieri adds the following, “He [Shawn] felt that the book was compromised by his inability, or at least unwillingness, to be completely truthful about his homosexuality.” (p. 11) And so, with Ted Shawn: His Life, Writings, and Dances Scolieri aims to recount Shawn’s life and work without that editing. And it surely had me wondering, how would the Father of American Dance’s story have been different if it had unfolded in the current social/cultural/artistic climate?

Ted Shawn: His Life, Writings, and Dances’ first chapter chronicles a myriad of topics from Shawn’s early family life, sadly marked by the tragic deaths of his mother and older brother, to his theological undergraduate studies as well as his initial forays into theatrical performance, choreography and dance on film. Then Scolieri moves onto Shawn’s artistic partnership with and unconventional marriage to Ruth St. Denis, which underscores the middle section of the book. Different aspects of the complex, oft storied, history unfold on every page – their prolific choreographic canon, the creation of the Denishawn School and brand, abundant performances, tours both near and far and critical responses to their work. Christian Science factors significantly in these middle chapters, as does Shawn’s pursuit of available academic and scientific research on sexuality. And as the reader approaches the last third of the book, the dissolution of Denishawn becomes part of the narrative, as well as the transformation of a Massachusetts farm into the iconic Jacob’s Pillow and the creation of a new company, Ted Shawn and His Men Dancers.

Factual details aside, what captivates most about Ted Shawn: His Life, Writings, and Dances is the layered, textured conversation that weaves throughout, one of masculinity, sexuality, struggle, financial uncertainty, artistic creation and legacy. And full disclosure, it is a rather lengthy conversation. At 443 pages (plus notes and index), Ted Shawn: His Life, Writings, and Dances is not a short book, and though there are sub-sections within each, its chapters are long too. But it’s very readable. Just be prepared for a slightly longer voyage.