October 6th – The first notes of Tchaikovsky’s Serenade for Strings in C echoed through the Palace of Fine Arts Theater – a famous music selection in concert dance, the score for George Balanchine’s timeless Serenade. Though here, this familiar musical opening was ushering in something different, Garrett Ammon’s Serenade for Strings, brought to life by the dance artists of Smuin, in this first program of their twenty-fourth season.

A cast of ten walked forward in a casual, unrushed gait, which quickly erupted into an expansive pas de deux for five pairs. Jubilant and varied movement abounded: flexed feet, thrown lifts, chugging jumps to the side. Morphing from a full ensemble statement into smaller groupings, the choreographic layering continued and accumulated with swiveling heads and emboîté turns; funny, whimsical moments meeting with luscious grace. Nicole Haskins and Jonathan Powell brought an innocent, playful vivaciousness with an early waltz and delighted with exuberant pas de chats and more emboîtés in the accelerando section near the end of the piece. This contrasted beautifully with the forward motion and sense of longing in Tessa Barbour and Robert Kretz’s lengthy duet; full of hope and strength, their stretchy arabesques sculpted the entire space around them. And while Serenade for Strings is not exclusively partnering, Ammon’s ballet is most definitely a dance for couples, steeped with a deep throughline of reciprocal respect.

I actually quite enjoyed seeing a different choreographic perspective paired with this known ballet music, and because Ammon’s Serenade for Strings has been in the Smuin repertory for a couple of years, the physical syntax is very much in their wheelhouse (with the exception of few challenging transitions here and there). Though I am curious about Serenade for Strings’ compositional structure, particularly the long middle portion, which, though beautifully danced, felt like it lagged. The piece follows an allegro-andante/adagio-allegro vivace movement sequence, or fast-slow-fast. Certainly a common format for choreography, and equally common is that the middle section can prove elusive, and that was the case here. 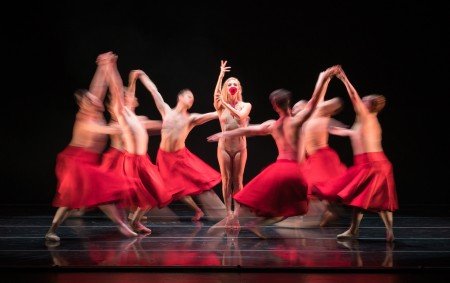 Next up on Dance Series 01 was the much-anticipated Requiem for a Rose, by Annabelle Lopez Ochoa, a ballet that penetrates with its contrasts and dynamic arc. The lights rose to reveal Erica Felsch center stage, a scarlet rose held in her mouth. Replete with ferocious, powerful choreography, Felsch’s opening solo married angular motions with wild swings; intensely crossed 5th positions with pulsating isolations. As twelve dancers (a bouquet of roses) entered the space to join her, the visual contrasts were striking. They, in flowing red skirts; she, in a minimal flesh-toned leotard; the other women in the cast with their hair tied back and wearing pointe shoes; she, hair unencumbered and with no shoes at all. From this point, the stage would continually transform into a series of distinct vignettes, each one a dynamic journey of physical fortissimos and mezzo pianos, emphatic accents and sustained fermatas. An emotive first duet by Valerie Harmon and Oliver-Paul Adams stunned with its sweeping, innovative lifts, while the men’s quintet sequence introduced charged turns and directional shifts. A later enchainment by Harmon brought back motifs from Felsch’s first solo, re-imagined and re-envisioned, followed by the sublime intertwined energy of Erin Yarbrough-Powell and Ben Needham-Wood’s serpentine duet. And then, the simple, but powerful conclusion to Requiem for a Rose. Led by Felsch, the cast walked across the stage from right to left. Had they decided that she knew the way and they would follow her? Did they just want to momentarily experience and visit  her reality? Or were they transfixed and hypnotized by her wisdom and acuity?

Closing the Dance Series 01 program was the revue-style ballet set to Frank Sinatra classics, Fly Me to the Moon, created by company founder Michael Smuin. Elegant, sparkling gowns, white gloves and debonair hats filled the stage for this choreographically diverse suite – traditional ballet set off by lyrical flair, contemporary vocabulary infused with jazz and social dance. Fly Me to the Moon is cool, it’s sophisticated and most important, it is fun. Throughout the nine individual scenes, flowy, well-crafted, yet demanding, phrase material unfolded: parallel pirouettes and Russian pas de chats, layouts, drag slides and grapevines, batterie arising out of the most surprising moments. Old-school tap even made an appearance in the first part of Erica Chipp-Adams and Adams’ The Way You Look Tonight – a mélange of pullbacks, paddle turns and double wings. Every lift and motion in Felsch and Powell’s Moonlight Serenade fittingly ascended skyward. And Kretz was the epitome of smooth and specificity with the Fosse-influenced That’s Life solo.

October 22nd – During the month of October, Dance Up Close/East Bay has been in celebration mode, hosting three weekends of performances in honor of a significant milestone – Dana Lawton Dances’ tenth anniversary. Each weekend’s program from the Bay Area-based troupe (a company-in-residence at Shawl-Anderson Dance Center) was distinct with different repertory and different musical collaborators. While I wasn’t able to catch every weekend, closing night was an experience of layered textural depth, marrying a broad, diverse swath of Dana Lawton’s choreography danced by ten company artists, original music by Jon Lawton and lighting design by Linda Baumgardner. The program was structured and curated like an intimate artistic salon, with a series of solo music offerings and dance/music collaborations unfolding in the studio space. Special moments abounded throughout the evening, but I think what struck most is that this is a group of artists who truly delight in one another. 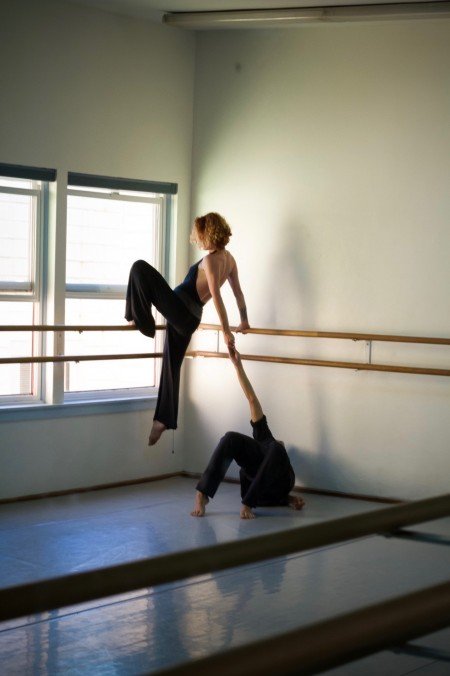 After a rousing, bluesy introductory song by Jon Lawton, a more ephemeral, cascading musical line took over, and Artistic Director Dana Lawton drifted slowly into the room for Why I Looked. With her entire being, she began exploring the space, articulating and intonating every joint and limb – arms rippling, spine arcing in an extreme backbend. As the short solo concluded, she sank into a chair, and turned toward her collaborator (in life and in art); they exchanged a knowing look and the lights fell.

Jon Lawton’s narratively rich lyrics and complex harmonies echoed in between dances and also scored the next five short works, which the company dancers shared with consummate skill and clarity. Original Sin was a scene of extremes, a quartet (Vera Schwegler, Garth Grimball, John McConnville and Michael Armstrong) that paired feelings of enclosure, suspicion and judgment with contrasting, expansive extensions in second position and in attitude. Subtle direction changes and gentle suspension/release movement was explored in Stars, a playful, slightly sly duet (Robin Nasatir and Jennifer Smith). And a highlight of the night was Mystery Meat, a joyful partnered pas de deux performed by Schwegler and Grimball. With its flying circular lifts and whimsical footwork, Mystery Meat truly ate up space, and Grimball’s unbelievable arabesque line seemed to extend from one end of the studio to the other.

An ensemble work (Colin McDowell, Leah Hendrix-Smith, Leah Curran, Schwegler, Grimball, Armstrong, Nasatir and Smith), Ashes took a deep dive into tactile articulation. Arms grasped, heads were supported, hands were held, cheeks lovingly caressed, handfuls of imaginary sand were picked up and then allowed to escape slowly through the fingers. Another standout work, Ashes hypnotized with its captivating attention and awareness. Next, the program pivoted to You’re That Wish, a solo danced by McDowell that felt both deeply introspective and outwardly communicative with choreography ranging from large jetés to hand gestures to task-based motions.

Closing Dana Lawton Dances’ tenth anniversary program was Holding Space, the only work on the bill set to recorded music, danced by the entire company. Each performer entered the studio casually, with no rush, surveying their surroundings with curiosity and pleasure. Though quickly, Holding Space’s high-energy phrase material would take over. Quirky head movements met with sharp, specific arm positions; cannoned sequences were cleverly embedded amidst unison partnering. And there was something so appealing about the style. While certainly contemporary in its choreography and movement vocabulary, Holding Space also had an authentic and genuine courtliness to it. This was a statement of community, of sharing reciprocal respect and admiration.

October 27th – The lesson from last night’s Dorrance Dance show at Cal Performances? Tap and the concert stage need to meet more often in the Bay Area. It was such a great evening – one of movement, of sound, of energy, of stunning musicianship. And percussive dance fans were not going to miss this opportunity. They packed into Zellerbach Hall to see the phenomenal artists of Dorrance Dance, led by Artistic Director Michelle Dorrance, in a one-night triple bill performance: 2012’s Jungle Blues, 2011’s Three to One and the Bay Area premiere of Myelination, which was co-commissioned by Cal Performances. 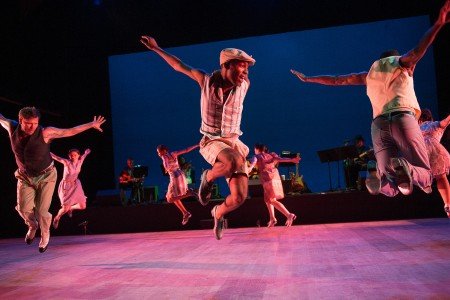 A crowd-pleasing romp, Jungle Blues’ slinky, stylized choreography was set amidst a smoke-filled stage. With retro costumes (by Amy Page), it looked like the company could have been dancing the night away in a 1940s bar, hip flasks even making the occasional appearance. Soloists would emerge from the collective with clever, dynamic phrases that married old-school tap steps and present-day rhythmic sensibilities: cramp rolls, wings, grab offs, multi-beat riffs and riffles, toe stands and a series of super fast single backwalks. The sound balance was a little off at first, but by the middle of the piece, had reached a perfect equilibrium.

After a brief pause, Dorrance, Byron Tittle and Matthew “Megawatt” West took the stage for Three to One, a tap trio infused with a whisper of contemporary dance. At first, the three contained their choreography to a large rectangular pool of light center stage (design by Kathy Kaufmann), in which heel and toe articulation reigned supreme. Swivels, clicks, beats and digs increased in tempo and in intensity, intimating something more, perhaps even a narrative of panic and frenetic energy. And following the dance’s name, Tittle and West exited the space leaving Dorrance alone, her pulsing paddle rolls eventually taking her out of the light and into the darkness.

Concluding the program was Myelination, a full ensemble experience, complete with live musical collaboration. Starting with a trio in front of the curtain, heel and toe directions once more set the scene, but this time, it was street dance that was in conversation with tap throughout the work. And just like Three to One, the composition was true to its title. Movement jumped from one place to another just like saltatory propagation along myelinated fibers. Large unison sequences morphed into smaller groupings and then to solos that were either structured improvisations or completely improvised. The opening and middle unison statements were both visually gorgeous and audibly exciting – a sliding floorwork motif and varied partnering were incorporated as percussive elements, intricate syncopation rang through the space and again, some classic stomp time steps took you back. And the group finale was so powerful with dynamics ranging from pianissimo to sforzando and cannoned patterns, all performed so miraculously by these amazing dancers and musicians.

Though for me, Myelination lost its way in the middle when it turned to a lengthy series of improvisations. Don’t get me wrong, the improv skills were impressive, improv is certainly an integral part of percussive dance traditions and improvising on stage must be acknowledged as a vulnerable and risky act. But as I watched the solos/duets unfolding on stage, I was struck by familiar questions.  How do we understand something so open and free when it is placed into a set performative container? Does the viewership lens change? Is improvisation a process, a result, both or neither?