Satellite Collective is the umbrella for a group of collaborating artists who design performances, and gather, cross-pollinate, incubate, and present works of art in a variety of modes on a global and virtual basis that are somewhat outside the mainstream. Founded in 2010 by Artistic Director Kevin Draper and based primarily in New York and Michigan, Satellite Collective has accumulated a significant number of contributing artists, and has commissioned over forty works through its collaborative process, with the goal of providing opportunities to explore ideas that the artists believe will influence the future.

That sounds ambitious, and it is. The result can be a mixed bag, as I observed when I first saw the group at BAM’s Fisher Hall last September, and as this program showed as well.

Last week the group presented several new pieces of dance, music, and visual art, at the 92nd St Y’s Harkness Dance Center. I’ll devote most of my comments here to the program’s dance performances, which were a pleasant surprise. These pieces – one choreographed by New York City Ballet member Devin Alberda, and one by Marcus Willis, who retired after an eight year dancing career with Alvin Ailey American Dance Theater – are untitled, perhaps an advantage since one views them without any preconception created by the titles alone. Regardless, both dances are intriguing, and each is quite good in its own way.

Willis’s dance is a duet, performed by him and Demetia Hopkins-Greene, another former Ailey dancer. To a score, also untitled, by Satellite Collective’s Music Director Aaron Severini (another former NYCB dancer), Willis has crafted an unusual duet out of a relatively trite subject: the ups and downs and ins and outs of a developing relationship. The movement proceeds in fits and starts, almost as if the dancers are moving mannequins (more Willis than Hopkins-Greene), but the impression is not so much staccato or jerky as wary and tentative – as if reflecting that both characters have been burned before, and need to weigh the potential emotional consequences before considering another relationship.  The piece has remarkable tenderness and sensitivity for something so initially strange-looking.

Quirky and primarily angular (but not rigidly so), the Willis dance initially follows the score, with every gesture reflecting musical punctuations. Normally I find this unsatisfying, but here it’s not being done because Willis is unaware that he’s doing it or incapable of choreographing something different – here it’s intentional, and it’s interesting. The dancers move independently at first, mostly in tandem, either as identical or as mirror images. The music has a soulful, mournful, even yearning sound, and Willis’s choreography reflects this. In a second segment, they dance together, developing mutual dependence – albeit still emotionally distant. Ultimately, to me, they appear to ponder whether the relationship is worth further commitment.  The piece is appealing even if my analysis of its meaning is wrong, or whether it has a meaning at all. It’s an accessible, engaging, and emotionally moving piece of work, nicely executed by both dancers.

The Alberda piece, on the other hand, has no ‘point,’ at least none I could discern, except perhaps the hint of unexpected passion initially buried, but then allowed to be acted on. Regardless, Alberda has created movement that, by itself, is sufficiently stimulating to watch unfold.

Taking his cue from the slow, scratchy-sounding, repetitive pace of the score (as if there’s a struggle among the instruments to find a measure of sonic peace, but it’s a losing battle), Alberda’s movement qualities for all three of the dancers involved – himself, NYCB dancer Peter Walker, and another male dancer unidentified in the program – are generally slow and melancholy, filled with images of reaching out, pulling in, and inner turmoil (much more with the choreography for Alberda than Walker) – and at times as if trying to fly away.

Initially Alberda and Walker dance solos, then duets, with Alberda at times appearing to be tormented by the presence of the other, and wrestling with emotions he doesn’t want to have to wrestle with. Then the third dancer joins after parading in front of, and then behind, the other two, and eventually joining them. The physical interaction between the two and three dancers, whether or not taken as reflecting stage relationships, can be both mesmerizing and beautiful to watch. And regardless of what one may think of the music (composed by Richie Greene, and played live by Greene and four other musicians), it’s a fine example of collaborative artistic effort. 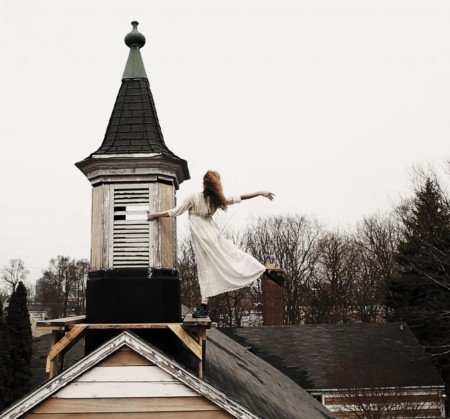 The balance of the program included a short 2015 film by Lora Robertson called Gran Jericho, which featured NYCB dances Marika Anderson and Lauren King, as well as Luna Paa-Gil. The film consists of still shots, and of the performers moving through fields, and on what appears to be a farm ground or areas near a village church. It revolves around the installation, or reinstallation, of a church steeple in a Midwestern town (the steeple, called an “architectural relic,” was created by artist Paul Amenta, and was on display outside the theater entrance). It may be avant-garde, but the film has the qualities of very old silent movies (except it’s in color), moving from still images to moving images with no coherence other than a sense of ‘place’ and continuing characters. I searched the internet for references to it (there’s nothing in the program beyond statements of where parts of it were filmed), and found it explained as “[a] narrative describing the identity shift of Maria, a long time Roosevelt Park resident, who came to Michigan as a migrant worker but then planted a proliﬁc garden for her own pleasure. This is personal narrative of the life of neighborhood inhabitants, told in a fantastical manner with live action and stop motion animation, and woven together with elements of neighborhood gardens.” If any of this is displayed in the film, it was too densely hidden for me to see.

The evening opened with a “Spoken Word and Soundscape” – a poem/essay written by Draper, and read by Nikhil Melnechuk, and also included artwork titled View From the Ceiling created by Draper, scenic artist Marie Rosasco, and Visual Designer Brandon Baker. I’ll leave evaluative comments to those better qualified. As for the dancing, however, this program was quite good, and I’ll look forward to Satellite Collective’s next program to see how it continues to evolve.