When I saw the title BOYS IN TROUBLE and read a press release that said an upcoming dance performance by Sean Dorsey Dance would offer “a timely examination of American masculinity,” I immediately wanted to attend. The perspective offered, however, isn’t perhaps what one would expect, unless you happen to know that Sean Dorsey is an acclaimed transgender and queer modern dance choreographer. Well, trans and queer boys aren’t the ones I’ve had trouble with, but I was more than happy to hear what they have say. Any insight at all might be valuable to me.

Dance Place in Washington, DC, among others, commissioned BOYS IN TROUBLE, and has supported Sean Dorsey Dance in the past, so for many in the audience, it may not have been the first time to see this San Francisco-based company. I watched the company, however, with virgin eyes. At the outset, I want to say that as a dance critic, I write about the power of dance, and that usually means commenting on specific performers. After all, bodies are the stuff of which dance is made. I was crushed to learn during the course of BOYS IN TROUBLE that some dance critic found it necessary to comment on the ways in which Dorsey’s body apparently looked female to the critic. I can’t fathom how that would’ve been relevant. It should go without saying, but I’ll evaluate Dorsey on the merits of his dancing and choreography, just as I would with any other performer. 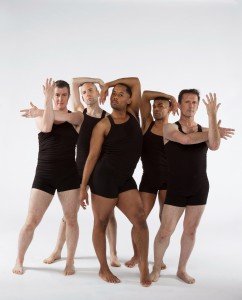 BOYS IN TROUBLE makes you laugh, maybe cry, and contemplate deep social issues. It’s a good example of how dance can serve as a thought-provoking messenger. Dorsey’s greatest talents may be editing and storytelling. He weaves a lot together in one evening of dance, and he manages to make it all come full circle. There are funny anecdotes mixed with profoundly heartbreaking stories, with interludes of pure dancing in between. The theatrical aspects of BOYS IN TROUBLE are more successful than the choreography itself, but the choreography, too, has its moments, especially in quiet tender intertwinings.

For me, the most unforgettable dancing occurred in a duet between two African-American dancers, ArVéjon Jones and Will Woodward. The pair dance a striking ode to love between black men, full of sweetness and strength. Jones lifts Woodward over his head repeatedly. Woodward, with a flat back like a table, bent at the waist, forms a bridge over Jones’s head. As a couple they make a single solid triumphant figure.

Yet it’s the words that stand out more frequently than the dancing. Whether hurtful or humorous, Dorsey has chosen extremely personal tales that bite. In fact, early in BOYS IN TROUBLE there’s a line about boys biting back, and these boys do. They also literally sniff out difference like dogs trailing a scent. How masculine are you, boys incessantly want to know. What if you join the cheer squad, what if you put rainbow stickers in all of your textbooks, what if you bring another man as your prom date, what if you menstruate? How do you navigate masculinity then? 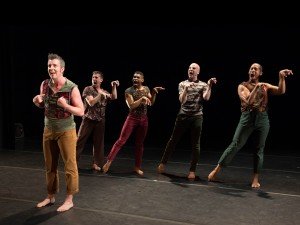 In a voiceover, Dorsey tells about the pleasure of sitting on alone on a bus. By oneself, with no one forcing comparisons, gender is immaterial, and one can comfortably sit and stare out the window, just like anyone else. But on most days, it’s safest to sit at the front of the bus near the driver. Even then, a pair of angry, tipsy white men can sit across from you and demand to know, “What are you?” You’ve thought far enough ahead to get off at a stop outside your neighborhood, but they follow you off the bus and assault you, and that means a longer walk home.

What grabs at the heart even more than this disturbing reality for those in the transgender community (taking what ought to be a simple bus ride) is wondering what we’d become if there wasn’t this need to diminish others. Dorsey dances this peaceful possibility in a touching duet with Brian Fisher. Next, he and the dancers inject a little comedy, but comedy tinged with truth. Even among queer and trans people, threatening questions about masculinity arise. The dancers ask, “Is THIS butch enough for you?” and take various poses. Is there no escape from the pressure to measure up?

BOYS IN TROUBLE reaches beyond solely trans and queer perspectives, though. Dorsey attacks white supremacy in a skit called “Let’s Talk About Whiteness.” The witty dialogue doesn’t really even begin to scratch the surface of the problems of race in America, but recognizing and confronting white privilege is an important step, aptly illustrated by Caucasian dancer Nol Simonse’s cowardly avoidance technique — screaming in fear, crumbling to the floor, curling up into a fetal ball, and proclaiming he’s “dissociating” when confronted with the term “white people.”

In addition, a searing question about what happened to “unselfconscious bodies” burns. Dancers lyrically flail, they rub their hands together as if trying to wash off self-disgust. Don’t we all carry wounds that live somewhere in our bodies because we were never taught how to deal with shame? 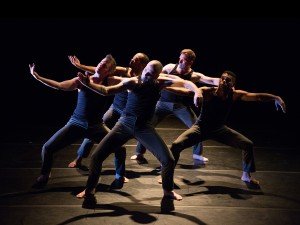 Toward the end of BOYS IN TROUBLE Simonse takes a solo turn en pointe. A voiceover explains that as a child, he used to recline naked on his mother’s warm ironing board, which felt great until he was informed that because the ironing board was in front of a window, this was wrong to do, as others could see his naked body. In an eggplant-colored dress, Simonse bourées, makes his arms billow, staggers and limps, and also spins beautifully.

BOYS IN TROUBLE ends much as it began. In a spotlight, Dorsey sweeps and circles his arms. He announces he wasn’t born in the wrong body, he was born in his body. As in the beginning, he reports he’s found his “pack.” The dancers then join for one last dance, taking turns lifting each other high. If only we were all united in that kind of love and support!

Credit also goes to Dorsey’s collaborators. The music, most of it composed by Dr. Alex Kelly and Anomie Belle, fits the performance well and adds a certain seamlessness. The costumes, too, by Tiffany Amundson, a lot of pedestrian t-shirts and pants, are appropriate; the lighting design by Clyde Sheets is on point; and the sound recording/mixing by Grace Coleman and Laura Dean is impressive. These elements all further contribute to the forceful storytelling of BOYS IN TROUBLE.

Go see this production for its wit and wisdom. BOYS IN TROUBLE doesn’t provide an easy answer to “toxic masculinity,” other than love and acceptance, but it presents a plethora of worthy things to ponder and laugh about.