It has been 23 years since I last ventured to Vashon Island and a lot has changed in that time, but a lot has not. Lured by the siren call of the debut of Seattle Dance Collective, I was very excited to have this adventure. My relationship with Washington State’s Vashon Island (west of Seattle) began on an auspicious day — Sunday, May 18, 1980. I was invited to see the island for the first time by Linda, my then YMCA employer, where I taught ballet. Linda lived on Vashon and wanted to show it off and also do something nice for me. 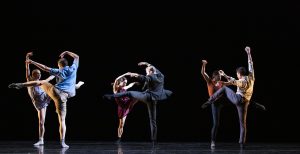 Spending the day there was great. Seeing the sights and walking on one of its scenic beaches, we had no idea that a cataclysmic event had happened just that morning: the blowing up of Mount St. Helens. Piles of ash went everywhere, except luckily, in the direction of Seattle where the skies were clear and blue.

This event actually saved the historic Columbia Theatre in downtown Longview, Washington, as demolition crews were poised and ready to begin tearing the theatre down on Monday, but they were redirected instead to move the mounds of ash covering the area. And 39 years and $15 million later, the Columbia is truly a jewel. (I performed in it many times prior to the restoration. It was lovely then, too, but much in need of work. Single light bulbs hung from a cord in the dressing rooms and water would gather underneath the stage where the chorus dressing rooms were.) 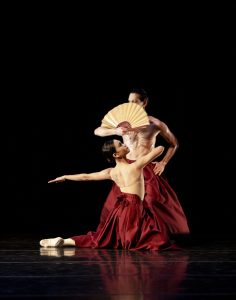 One of my other Vashon Island connections is having been either a guest or substitute ballet teacher at the Blue Heron Art Center, an old building with a good-sized dance studio upstairs, then live music (piano accompaniment), barres, mirrors, and a view of grazing sheep out the southern facing windows.

The sheep are now gone, their pasture having been replaced by the (again new to me) parking lot for the beautiful and well-designed Vashon Center for the Arts, with its large and accommodating foyer (filled with sculpture and a dedicated art gallery), a large stage, and an auditorium that’s acoustically “live” and quite good. 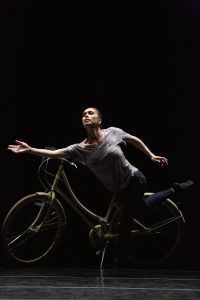 The next cataclysmic event, following the eruption of Mount St. Helens, while not of volcanic proportions, was a major event never-the-less:  the inaugural performances of Seattle Dance Collective.

The program began with an unannounced teaser — “In a Minute” a solo performed by James Moore, in about 90 seconds, choreographed by Penny Saunders.

We were then welcomed by Pantastico and by the Center’s Executive Director. 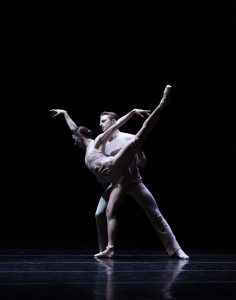 The first work was a duet, The Grey Area, created by David Dawson, and was somewhat in the style of William Forsythe — extended lines and technique, and very ably and strongly performed by Elle Macy and Dylan Wald.

Shogun, a duet performed by Moore and Angelica Generosa and choreographed by Ivonice Satie, was, as you can imagine from the title, ritualistic. Repetition is part of the Japanese movement culture and this work reflected that in its choreography, almost to the point of being too much, yet just at that juncture the dancers pulled out large fans that became part of the dance, altering it like a haiku.

Saunders also contributed Sur Le Fil — “By A Hair’s Breadth” which was a neat and fun group work with fedoras set to French music. Saunders deployed the cast to its fullest with Aung, Generosa, Kent, Macy, Murphy, Pertl, Thomson, and Wald. 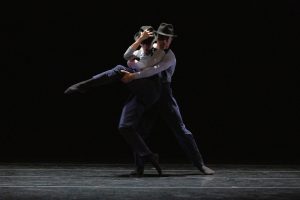 Bruno Roque created a self-reflective piece, Anamnesis, for Pantasico. The work looks back at her childhood and upbringing in Hawaii, and her all-too-brief relationship with her father who passed while she was still quite young. Anamnesis is a personal and intimate tour de force.

Roque also made a work at the other end of the emotional spectrum, Frugivory, a “fruit” duet piece. It features witty and well thought out dancing dialogue about apples, persimmons, and one banana. Pantastico and cast were joined in a walk-on visual gag with (I think) Elle Macy, with the lone banana. Roque is a choreographer new to me and given his proven facility, I look forward to more of his work being represented in the Northwest. 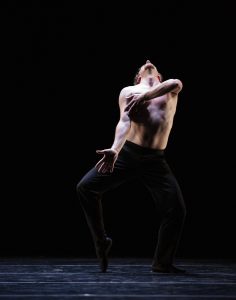 Mopey, choreographer by Marco Goecke, is a showcase solo work. Ezra Thomson more than gave his considerable all to this athletic and quirky dance. Its surprise ending has the dancer look up into the theatre flies and “blow out” the lights. This was great fun and a good closer to a fine bill.

There were many supporters — quite a few from “off-island” — when asked by a show of hands. I happily ran into one of the founders of this website, Azlan Ezaddin, who had come up from the Bay Area, accompanied by Lauren Jonas, the Artistic Director of Diablo Ballet (Walnut Creek, California). We all agreed that one of the best ways to support something is to show up and a “be a seat in a seat.” Lauren herself said, “I know what it’s like to start something from scratch.”

Seattle Dance Collective is off to a great start, and I can hardly wait to enjoy Program Two.