As I was traversing Seattle’s infamous traffic across its iconic Capitol Hill to get to one of Seattle’s best — and most unique — dance festivals, a couple of blocks away there were throngs of people lining the sidewalks, clearly waiting for something.

I wondered out loud what the hubbub and hullabaloo was all about. Within my circle of dance friends, there is an inside joke that when we see crowds like this, we hope that they are there for — pick one:  the ballet, the opera, chamber music, or an art gallery opening. Respective arts groups secretly hope this too.

In this case, however, it turns out that it was merely Bruce Springsteen appearing at Elliott Bay Books to hawk his new autobiography. Sigh…

There was, nevertheless, a fair crowd for the Saturday matinée of the two week run of the Seattle Men in Dance Festival. This original festival features male-only performers [well, there were a couple of petite exceptions this year to this rule] and usually new choreography made especially for this event. 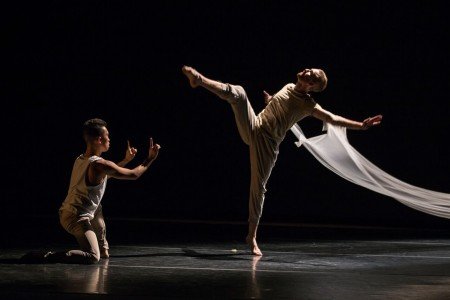 19 choreographers — both male and female — were represented this time. Some local and quite a few from elsewhere, including those who have had modest careers thus far and those who have done performing and directing on a global level.

Week one of the festival featured eight works, each strongly danced and lovingly presented from a production stand point, featuring the best lighting designs that could be made in this mid-sized theatre.

Showmen made by Gerard Théoret had its cast, in slacks and jackets, strut and present themselves in a jazzy way, with a hint of Bob Fosse and Jack Cole showmanship. It was a great introductory piece that showcased the technical and performance skills [considerable] of its dancers. 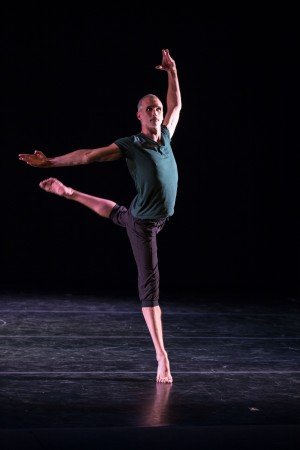 One Man’s Voice was just that — the autobiographical tale of its amazing and impressive performer, Bruce McCormick. I’ve seen a lot of dancers over the decades and would be hard pressed to think of anyone, with perhaps the exception of Robert Steele [my former teacher at Boston Ballet School many summers ago], who has the endless length of leg and line in all directions. Stamina, inventiveness, power, elevation, fluidity were all on display to great effect. Locally, we are lucky that he is now an assistant professor at the University of Washington, where he received his M.F.A. degree.

Michael Gaber’s Comradery was light fun, and the title also tells us its content. This work was danced nicely by six youths exploring comradery and friendship.

Cornish College of the Arts Professor of Dance Deborah Wolf is an experienced choreographer and this showed clearly in her creation, Three Piece. Its theme of parallel arms with hands splayed diagonally down while in opposition to the body was interestingly explored and developed.

Dylan Ward’s contribution was Chimera — or — The Unicorn which made good use of spatial levels and its cast of Shane Donohue, Alexander Pham, and Jasper Lane. Its theme, perhaps intentionally or otherwise, seemed to be that of a love triangle, mystic even.

The work Aylan Kurdi [I see human but no humaity], choreographed by Laura Rodriguez, and featuring a film by Allison Burke, tackled the difficult theme of “never again war” with a contemporary video backdrop showing clips of the human toll and devastation of Syria. The dancers depicted horror through shaking, violent trembling, and use of floor work. Works like these are tough but also must give us hope and not complete despair. 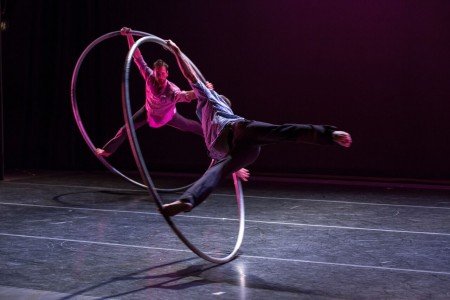 The hit of the afternoon, though, for me, was the nugget and humor of Katheryn Reed’s What Goes Around, a playful name for a playful dance. One tall dancer versus one shorter one, each with what begins as normal sized hula-hoops, turned into a virtuoso display of technical and performance skill using giant sized metal hoops that the dancers stood in and then manipulated, rolling, swiveling, twirling, and passing each other. It was an amazing feat and a joy. Reed showed us an arch in her concept; a mini story that had a logical flow, was easy to follow and made sense. Bravo and bravo to its dancers, Terry Crane and Ty Vennewitz.

The program ended all too soon with Backbone, made by Mike Esperanza. 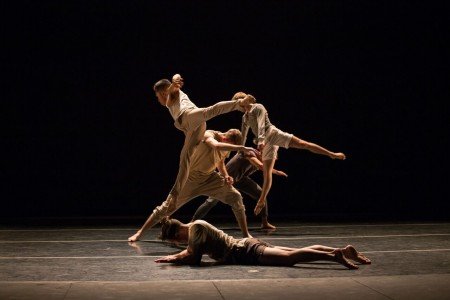 I was happy to hear from the emcee, Thérot, that Men in Dance will be producing a small choreographic workshop in its off-performance years, apparently in response to requests from Men in Dance fans who, like me, have a hard time waiting two years in between this special and unique to Seattle festival.