Dresden, situated on the banks of the Elbe, is a city of around half a million, but in the fine arts and music it punches well above its weight. In addition, for the past century dance has also held an important position; Mary Wigman and Gret Palucca performed there and during the Soviet era, when classical ballet ruled, Palucca had enough clout to insist that contemporary dance stayed part of the dance curriculum.

Fast forward to 2006 when Canadian Aaron S. Watkin took the helm at Semperoper Ballett and fashioned a company to suit the 21st century. He has built a repertoire that includes Alexander Ekman’s off-the-wall COW, a solid core of traditional classics, the best of Balanchine and premieres from David Dawson. In particular, based on his experience as a dancer in the Forsythe Company, Watkin has forged a special relationship with the choreographer and for their long-awaited London debut, he wisely chose a Forsythe triple bill which the first night audience adored.

Opening with In the Middle, Somewhat Elevated, the lights come up on Svetlana Gileva and Alice Mariani, poised and posed, daring you to think you know what to expect, then treating you to one of best renditions seen on the London stage. Their technique has the clarity of cut crystal, the articulation is eye watering, yet somehow between the highspeed punchiness the bodies can still melt for a split second of sensual delight. Thom Willem’s music pounds incessantly with each dancer catching the beat and the breathing space between. Houston Thomas thrilled with high, explosive jumps and catlike grace while Thomas Bieszka, featuring in the main duets, hits the right balance between virtuosic fervour and don’t-give-a-damn. In a stage full of fabulous classical shapes, Mariani’s arabesque begs to be watched while Gileva injects ecstasy into the Vaganova textbook. 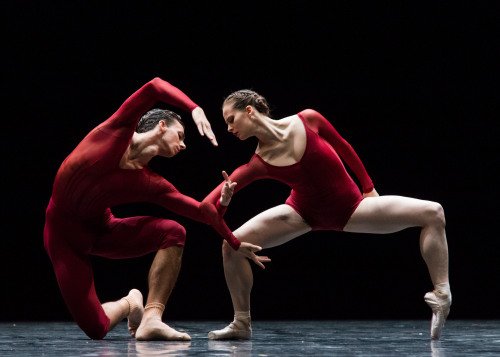 Neue Suite is a superb show off vehicle for the Dresden dancers: sixteen vibrant individuals, of varying sizes, uniform only in their exceptional dance talent, and for each couple a duet that plays to their unique gifts. It also showed Forsythe’s originality ranging from Zarina Stahnke and Thomas in the boisterous Baroque Händel 4 to the multi-layered Bach danced by Sangeun Lee and Christian Bausch, who have god-given grace in their long elegant bodies. There was teasing virtuosity in the perky Händel 2 danced with glee by Chantelle Kerr and Julian Amir Lacey and extraordinary innovation for Jenny Laudadio and Jón Vallejo in Berio 3 where partnering discovers untrodden paths. 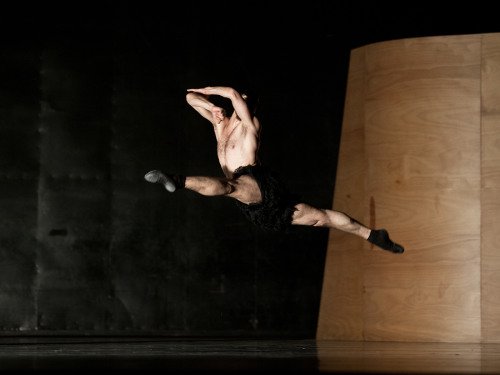 Semperoper Ballett in Enemy in the Figure
Photo: Costin Radu

Enemy in the Figure has a pulsing energy that ebbs and flows through a half hour of total art immersion. It opens on an untidy stage as if the crew have taken a lunchbreak and dancers that just seem to be warming up. Expect the unexpected, as order is never fully restored. Snake like cables semaphore urgent messages between dancers. Willems music sets the pace throbbing with tension easing a little then ratcheting up a notch.  Towards the end it almost waxes lyrical as duos embroider the periphery in a little temps levé chassé motif lulling the audience into a mesmeric state before bringing up the heat again. Forsythe, like Jackson Pollock, knows just the spot to dribble the paint or pull the focus.

A wavy wooden panel dissects the stage contrasting the utilitarian surround with the warm glow of timber. The mobile floodlight is shunted round the stage shaping the dancers’ bodies and making startling changes to the environment. And all the while the choreography weaves in and out as a burst of flashy Forsythe duo is contrasted with a laidback louche line up. Dancers work on the floor, in the air, and even up the wall with Jón Vallejo leading the pack, a powerhouse of pure energy. Created in 1989 it is a masterpiece, as dance finds its metier in conceptual art.