Possibility. Freedom. Joy. We all could use more of these three themes right now. And one place to find them reflected is in the San Francisco short dance film scene. This month saw the premieres of two fantastic new films and both remind the viewer what is possible, what is freeing and what is joyful.

On August 4th, Terez Dean Orr, John Speed Orr and Elliott Bastien Morin released their third film created with camera phones and virtual platforms during shelter-in-place (read my May interview with the trio HERE). While the earlier two pieces center around their home and neighborhood, Ground Effect finds T. Dean Orr and J. Speed Orr (current Smuin Contemporary Ballet artist and former company member respectively) traversing the highway and dancing in picturesque outdoor environments. The three and a half minute journey affords viewers the opportunity to see where these two individuals, introduced in previous films Shelter in Pace and Recipe for Disaster, are as we near 150 days of isolation. It is open and hopeful – conceptually and choreographically.

Ground Effect’s visual landscape conveys such an evocative, genuine tone through its many layers and textures. Loose earth and the winding roadway; flower arrangements and lilting grass; the wind weaving through the dancers’ hair – every element combines to produce an atmosphere of freshness and newness. Egalitarianism is also undeniable throughout. Driving in a car and curiously peering out the window, nodding off in the backseat, pulling over to the side to check out the view – these are states we can all relate to. Black and white footage makes Ground Effect clean and cool, as does its amazing angles and shots. I am so curious as to how they captured the stunning, shadowy aerial views.

Equally elegant from a choreographic standpoint, Ground Effect’s physical syntax is all about forward motion and freeing energy. Running lunge steps abound while swirling partnered spins pepper the phrases. Elastic arabesques meet outstretched arms and expansive solarplexus. And some motions and sequences have an inventive avian-inspiration, like the two dancers could float and fly away like graceful, soaring birds. Such buoyancy and levity are indeed a necessity for 2020.

Check out Ground Effect at https://www.youtube.com/watch?v=eHc4bUsEZ88

The following week, on August 13th, San Francisco Ballet released their new choreographic-cinematic collaboration, Dance of Dreams, directed by Benjamin Millepied. Unfolding in four picturesque outdoor San Francisco sites, Dance of Dreams has a truly epic, almost romantic tone, as if you were watching an escapist moment from a classic Hollywood stunner.

Scored by Bernard Hermann’s sweeping Scène D’Amour featured in Alfred Hitchcock’s Vertigo (1958), Millepied’s six-minute film takes a solo-duet-solo-duet form (the duets were performed by dancers who have been weathering s-i-p together), each section choreographed by a different dancemaker. Joseph Walsh glides through a liquid sequence by Justin Peck, followed by a luxurious pas de deux for Ellen Rose Hummel and Daniel Deivison-Oliveira by Dwight Rhoden. Frances Chung floats and suspends through a solo by Janie Taylor with Christopher Wheeldon offering the final energetic chapter for Madison Keesler and Benjamin Freemantle. 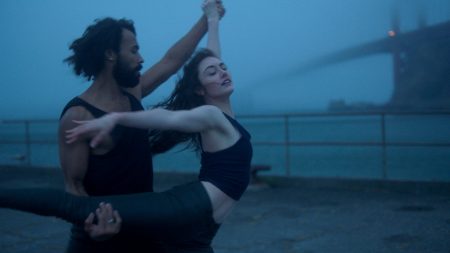 Though each choreographic voice was and is wholly distinct, a number of striking threads link Dance of Dream’s four episodes together. Yes, the San Francisco connection of course. But so much more. First is the common mood and atmosphere. Each vignette shared the same sense of isolation, though it was not despondent in any regard. Instead, each cast member imbued their choreography with a heartening wistfulness. Openness was palpable as was potential. Second was the abundance of arcs and roundedness. Classical and contemporary vocabulary dove deeply into circular movement – port de bras, whirling lifts, spins in succession, undulating torsos, jumping turns in the air, patterns and circuits. Walsh’s attitude turn was a stand out moment, the step rotating backwards as if a clock was rewinding to an earlier time. And the spin at the end of Hummel and Deivison-Oliveira’s duet was absolutely breathtaking. Facing each other, Hummel wrapped her arms around Deivison-Oliveira’s neck as her legs flew out behind her. All while rolling fog and sweeping wind flooded the scene. 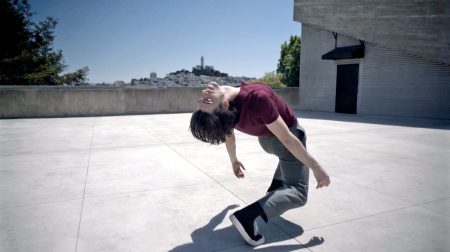 And there was an instant at the end of each solo that felt profound. Walsh and Chung took a moment in stillness to gaze longingly at the vista before them. They looked as though they were considering ‘what might be next’ or ‘what could be’ with expressions of hope and want. Dance of Dreams would then pivot into one of the duets. It was as if those duets were the soloist’s dreams. A moment to engage with another soul. To clasp hands and create movement together. Such a beautiful and uplifting message.

A day later, RAWdance pulled up a chair at the dance film shorts table with the latest iteration of their CONCEPT series. A favorite San Francisco modern dance sampler, the longrunning CONCEPT platform (this is number twenty-eight) invites a wide array of contemporary choreographic voices to share work at any point in their artmaking process. In recent years, the event has unfolded in The Green Room at the San Francisco War Memorial & Performing Arts Center and every time I’ve attended, I’ve been struck by how CONCEPT always seeks to celebrate innovative physicality and risk-taking performance.

Like the entire dance field, RAWdance has had to shift gears over these last months and the CONCEPT series has as well. August 14th saw the launch of CONCEPT’s first digital edition with a live-streamed program of seven short films ranging from thinky to quirky, abstractly formal to narratively nuanced. 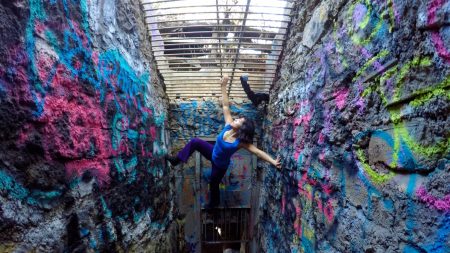 Over 175 people tuned in to watch the virtual happening, hosted by RAWdance’s winsome artistic team: Wendy Rein, Ryan T. Smith and Katerina Wong. And there wasn’t a technological hitch in sight. Kicking things off was the debut of Eric Garcia’s (of detour dance) Up On High – a vast and expansive film rooted in meditative ritual, duality and lineage. Megan Lowe/ Megan Lowe Dances brought (UN)CAGED and challenged the audience to consider boundaries, obstacles and how an empty space has a memory. Responding to the abandoned Old LA Zoo, Lowe explored the enclosures at length – inside and out, swinging on the metal grates – and though (UN)CAGED was a solo, it felt like she was also conversing with the souls/presences who had previously inhabited that place.

Post-modernism certainly played a role in the next pair of premiere films: Box World by Jocelyn Reyes/Reyes Dance and Marissa Brown/Lone King Projects’ Self-Portrait. Amidst a tower of cardboard packing boxes, Reyes explored how the human form might engage with everyday items. And while her thoughts were simultaneously captioned at the bottom of the screen, Brown took us on a non-linear personal journey; the movements of the palms and hands, an intoxicating focus. 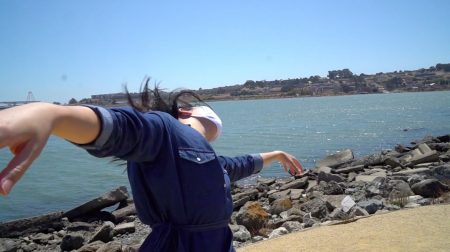 A standout piece of the evening, the premiere of Wong’s Clipped featured a trio dancing in a picturesque outdoor setting, adhering to social distance requirements, each performer donning layers of fabric masks. But the specialness in Clipped was that it didn’t look restricted at all. Its tone was spacious and the choreography followed suit with wide arms, large circles and open upper bodies.

From beginning to end, RAWdance’s CONCEPT series: digital edition was a rousing success and two final premiere dance shorts wrapped up the stellar program. A spiritual, almost liturgical sojourn, Frankie Lee III/FLEE’s JOURNEYS W/ GOD combined natural environments with flowing movement phrases. Sinuous and fluid, each step melted effortlessly into the next, conveying an unending stream of consciousness. The final screening of the night, Smith and Rein’s Picnic, reminded me so much of Charles and Ray Eames’ 1977 Powers of Ten. At least at the very beginning as Smith and Rein relaxed in an idyllic scene. From there, Picnic takes off, evoking a layered, textured conversation between the two. Pairing food and movement together in a familiar container, emotional extremes abounded – from frustration to satiation, sober to comic, conflict to peace. 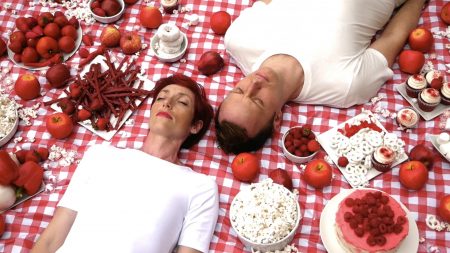 For more information about the CONCEPT: series, visit https://rawdance.org/