May 11th (matinee) – Like most major ballet companies, San Francisco Ballet’s annual season combines several full-length narrative ballets alongside mixed repertory evenings. And I’m someone who is pulled to both types of offerings. While I tend to favor the triple bills because of their variety and breadth, I’m wholeheartedly a fan of the multi-act story ballets too, though admittedly some more than others. But every once in while a program comes along that seems to straddle both formats, weaving a strong narrative thread throughout, while presenting three distinct and unique choreographic frames. Alexei Ratmansky’s Shostakovich Trilogy, which had its SFB premiere in 2014, is one of these rare birds. The final program of 2019’s repertory season, Ratmansky’s Trilogy narratively mines the life and work of Russian composer Dmitri Shostakovich, while its three contrasting parts, each set to a different Shostakovich masterwork, offer deep choreographic scope.

Trilogy makes no attempt to tell a linear story, but its narrative threads and tones are undeniable. Spiritedness lightness imbues the beginning of Part I Symphony #9. While the plucky, staccato, almost musical theater-inspired score soared from the orchestra pit, under the brilliant direction of Ming Luke, Ratmansky played with polka steps, technically demanding hops en pointe and moments of pure camaraderie that found the principals weaving through and dancing with the corps. And then the mood takes an abrupt turn. As Mathilde Froustey and Luke Ingham entered the space, a wave of uncertainty and wariness flooded the visual and aural palette. Together, they peered over their shoulders in anticipation of something ominous. Their duet was filled with movements on low demi-pointe rather than full toe, which felt an apt metaphor for a journey that that was just beyond their reach. Catapulting through these divergent scenes was Lonnie Weeks, whose jumps and turns were some of the best of the entire day. 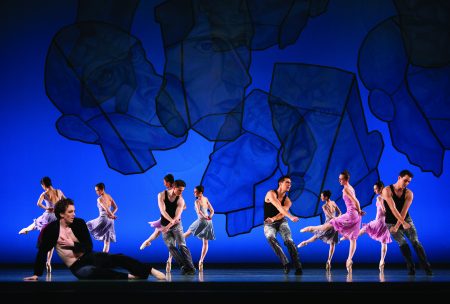 Part II Chamber Symphony, is the most storied of the group, though again I wouldn’t necessarily call it sequential. Costumed in a black suit with an open jacket, Joseph Walsh takes on the Shostakovich role, with a trio of principal women (Jahna Frantziskonis, Elizabeth Powell and Sasha De Sola) portraying three of his loves. Moments of affection and joy are peppered throughout, though for the most part, the ballet swirls from melancholic to urgent to tortured. Peace, calm and rest seem to elude Walsh’s character, a state that is mirrored on George Tsypin’s backdrop by a fractured collage of faces and profiles. Legs fly in every direction; arms search in a whirling stream for something unattainable. As one would expect, there are several pas de deux between the main players, but it was Walsh and Powell’s incredible connection that made the audience gasp. Every suspended hold, abrupt fall and swimming spin radiated a poignant longing and yearning.

Piano Concerto #1, Part III has a boldness to it. Red, geometric shapes hang from the rafters; Keso Dekker’s costumes have the corps in two-toned unitards (grey on the front and red on the reverse) and the principal women in striking, shimmering scarlet leotards. Much of Ratmansky’s movement vocabulary in this chapter explored off-center steps and postures combined with malleable and strong positions alike. One of the two featured couples, Isabella Devivo and Wei Wang commanded the stage with their precise footwork and whimsical additions, like the flexed frappés that traveled upward from Wang’s ankle to above the knee.

One special element of Trilogy is the abundant corps work in each movement, though one could argue more so in the first and third. The lush, rich vocabulary seems designed for the senior corps dancers – those with seven, eight, maybe even nine plus years experience in the corps de ballet. While SFB definitely has these exceptional artists in its roster, there’s only a handful, and sadly, seems like less and less every season. The few senior corps who danced on Saturday afternoon were absolutely fantastic. A ballet like Ratmansky’s Trilogy certainly requires advanced technical skill, which they have to spare. Though, its need for movement maturity, attention to transitional space and general spatial awareness is perhaps even more important. And I do think, when it comes to these qualities, time makes a huge difference. If you were in the audience this past weekend, that marked difference was indeed noticeable. 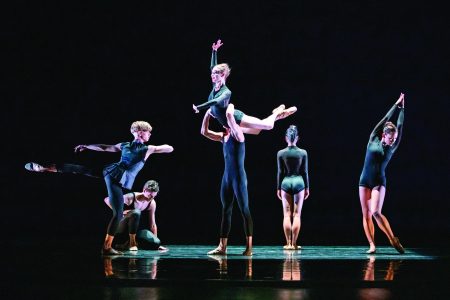 May 24th – Each year when the curtain comes down on San Francisco Ballet’s final repertory program, a note of bittersweetness pervades the air. On the one hand, season’s end is a moment to reflect on the range of classical and contemporary work that has graced the stage in the previous months. On the other hand, it means that it will be quite some time before the company returns to the War Memorial Opera House. But SFB enthusiasts can take comfort in the fact that several other Bay Area engagements are part of the company’s annual calendar, like this summer’s Stern Grove Festival appearance and of course, San Francisco Ballet School’s year-end celebration, which ran last week at Yerba Buena Center for the Arts. This year’s school showcase not only included three new works born out of the Choreographic Fellowship Program, but also distinct programs on each night, transforming the production into a three-day festival. I caught the final performance.

As is customary, Act I began with the phenomenal School Demonstration, choreographed and envisioned by faculty member Karen Gabay. As students in levels 2 through 8 shared their talent with the audience, such joy and charm leapt from the stage. From unassuming chaissé tendu and changement to more complex pas de deux and bravura jumps, precision, clarity, elegance and confidence was unmistakable from this inspiring cohort of dancers. The program then moved on to the first of six repertory works, beautifully interpreted by the senior classes and the school’s Trainees. A contemporary ballet for six, Marc Brew’s quicksilver brought many lovely moments, though I think what this dance did best was mine different choreographic configurations. Cycling through serpentine positions and twisty shapes, both cannoned and in unison, we saw a captivating array of duets, trios, solo work and picturesque clusters. 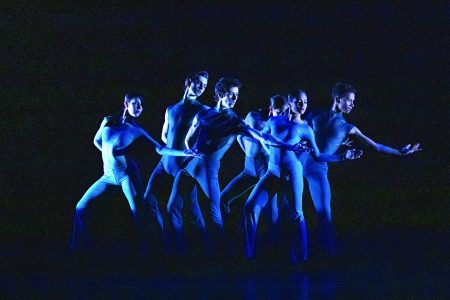 A pair of Jiří Kylián compositions ushered in the program’s second act: Falling Angels for the women and Sarabande for the men. While I can’t say for sure if this was the intention or not, Angels had a fascinating intersection where grounded, percussive vocabulary met an old-school Fosse jazz aesthetic, while Sarabande added emotive dramatics to the stage’s palette with high throttle phrases and extreme positions. Next up was Constant Search by choreographic fellow MJ Edwards, set to a Max Richter score (indeed a favorite composer amongst 21st century dancemakers). An ensemble work for nine, Search’s blue-green costumes, swirly vocabulary and skating/sliding motifs imbued the work, framing it with a distinctly aquatic tone. Closing Act II was Helgi Tomasson’s celebration of Baroque music, Concerto Grosso. A quintet for five men, Grosso takes a deep dive into the Baroque tenet of simultaneous independence and interdependence. Each dancer’s choreographic material can certainly stand on its own, yet can also be woven with others to create a more layered physical tapestry. And I particularly enjoyed Grosso’s intricate details, like the batterie mirroring the many mordents and trills in the score.

Tomasson’s Ballet d’Isoline took the final place of the evening – a large cast classical offering, complete with corps work, a grand pas de deux and a lengthy variation sequence, also for five men (with the Kylián piece and both Tomasson works, the senior and trainee men were unquestionably the featured group on this program). As had been the theme of the entire night, the dancing was incredibly clean and assured throughout the extensive vignettes and the principal duet by Sunmin Lee and Anicet Marandel-Broutin. I thoroughly enjoyed all the aspects of this excerpt, and with an enviable maturity in their movement, the lead couple were impressive. Though I thought d’Isoline was a bit of an odd choice as a finale. Again, it was danced beautifully, but the work itself just doesn’t exude a finale ta-da quality.

I was excited again to see that women’s voices were heard during the festivities, as they were last year. Gabay’s School Demonstration opened each of the three programs, and Choreographic Fellows Maya Wheeler and Pemberley Olson premiered their respective works on Thursday evening. At the same time, I was equally challenged to see only three female dancemakers in the mix. Friday’s program, in particular, had seven works, of which only one, the school demo, was choreographed by a woman. More work can be done (and should be done) towards gender parity in ballet programming and choreographic commissions. What a wonderful example that would set for the next generation of professional dancers.