Jan 20th – Over the past four months, the dance world has been blessed by the tenth iteration of Amy Seiwert’s Imagery’s SKETCH series, a platform that encourages dancemakers to move outside of comfort zones and create new work around a specific question or theme. For SKETCH Films: Red Thread, Artistic Director Amy Seiwert challenged four choreographers (herself included) “to create a dance film following social distance protocols, inspired by those who have been impacted by the recent health, economic, and injustice crises.” Each met the task with care, creativity and depth, tackling issues like industry decimation, racial injustice and the early days of the AIDS pandemic. The first of these films debuted back in October and the final offering premiered last Friday, What the Body Holds, a collaborative project led by Imagery Artistic Fellow Ben Needham-Wood and filmmaker Matthew McKee. 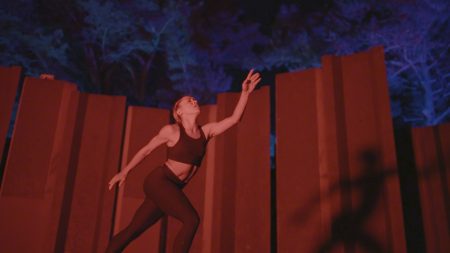 Jenna Marie in What the Body Holds
Photo Matthew McKee

Inspired by the work of Svetlana Pivchik, an activist who works with domestic violence and trauma survivors, What the Body Holds bravely shares personal traumas and journeys of survival. Links and connections – between the body and trauma, between physicality/emotion/cognition – drive the striking dissertation, as it boldly looks at movement as a healing practice, and mines its power to hear, reclaim and create new pathways within the self. It’s raw. Vulnerable. What the Body Holds is mighty.

Throughout its fifteen minutes, What the Body Holds repeatedly returns to scenes of soloist Jenna Marie, almost like a choreographic ritornello. And in those returns, one witnesses the notion of a journey. In the first dance chapters, all choreographed by Needham-Wood, Marie’s eyes are often closed, her body, purposefully tense. Clinging to the walls, her torso violently contracts and her limbs fly frantically through the air. Later sequences feel quite different. Certainly still charged, but with a renewed dynamic and intention. Marie moves into the middle of the space, claiming it. Her hands and palms reach outward. She embraces herself. Turns, leaps, and even stillness, are undeniably freeing. Legs and arms continue to extend, though with an openness not present before. All of Needham-Wood’s choreography was breathtaking as was Marie’s performance of each step and phrase. But it was the evolution of tone that most struck – through movement, Needham-Wood captured the idea of active, in process change.

Jan 30th – Over the past eleven months, the idea of starting a meditation practice has come up on several occasions. To navigate the craziness of this time. To calm the body, mind and nervous system. I’m on board – I think it’s a great idea. Though I have found it a challenge to forge this new pathway. Breaking patterns seems to be an easier road for me than creating new habits. 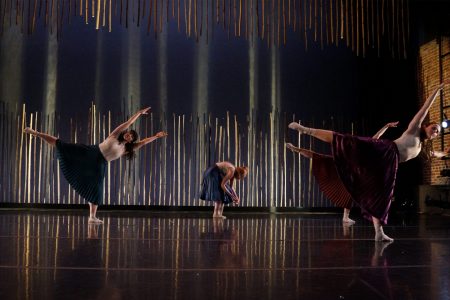 But then I realized that a meditation practice is very personal, and so it likely doesn’t look the same for every individual. For some, it might work well to have a certain time set aside where the practice unfolds in the same manner each session. Whereas for others, a meditative practice might include a number of different elements – yoga, guided meditation or immersive art experiences. This past weekend, RAWdance offered audiences the chance to try the latter. To dive into dance as meditation with the premiere of The Healer, streamed virtually, and co-presented by RAWdance and ODC Theater.

Choreographed by RAWdance co-artistic director Katerina Wong and inspired by the life and work of Wong’s aunt Szuson Wong, the thirty-minute quartet mines the process of healing through the lens of ritual, ancient practices and Chinese Medicine traditions. Overlying much of Daniel Berkman’s evocative score is the voice of Wong’s aunt, leading us through The Healer’s journey. A journey performed with such care and awareness by Michaela Cruze, Juliann Witt, Wong and Stacey Yuen.

The Healer unfolds in a through-composed fashion; the choreography linked and connected from beginning to end without internal stops or starts. And this meditative marriage of somatics and mindfulness included a wide range of choreographic language. Attentive, in-the-moment tasks graced the work’s first minutes – removing footwear, washing hands, writing remembrances – which segued into a variety of Tai Chi modeled postures and progressions. Body percussion simultaneously released and harnessed energy. Tempo varied. Phrases and motions repeated and accumulated potency. And Wong thoughtfully injected moments of stillness and quiet throughout the material.

While internal, individual reflection was indeed present, the notion of the collective was so strong and palpable. The quartet would cluster together in a huddle or a lift, almost like an atom. These beautiful shapes would be followed by an outward eruption into the space; particles bursting everywhere. Several instances of shared vocalization peppered the work, as did powerful unison sequences that blended small reflexive shoulder contractions with large lateral Horton side tilts.

Feb 21st – This past weekend, Diablo Ballet presented a new program as part of their twenty-seventh season, a lovely quadruple mixed bill of contemporary and classical dance. The four works of Balanchine & Beyond really spoke to the power of variety: portions from George Balanchine’s neoclassical Who Cares?; Penny Saunders’ contemporary duet Berceuse; a dramatic world premiere by company artist Michael Wells and Derion Loman; and excerpts from a historic ballet icon, The Sleeping Beauty. It was a charming program that only had one minor hiccup for me. 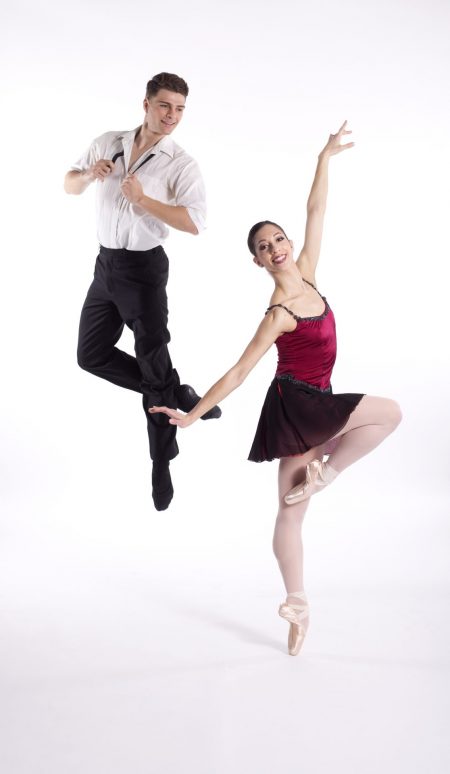 Created by Balanchine in 1970, Who Cares? is a delightful revue-style ballet, each short chapter set to a different George Gershwin musical selection. Staged for Diablo Ballet by Sandra Jennings, the work pairs sweeping romance with fun flirtation all while highlighting the tenets and characteristics of neoclassical movement. Unexpected step progressions; an innovative take on ballet vocabulary; and most of all, choreographic musicality. Amanda Farris’ jazz slide, pas de chat, entrechat quatre sequence in Stairway to Paradise married perfectly with the music, as did Olivia Powell’s relevé series and shoulder shimmies in Fascinating Rhythm. Farris, Theresa Knudson and Powell’s timing, which subtly toggled between unison and canon, and spacing in a small black box theater, impressed in I’ve Got Rhythm, which eventually grew to a quartet when the trio were joined by Donghoon Lee. The internal bows between each song were the only tricky spot, as they gave way to a bit of a stop-start feel. At the same time, each dance was scored by a different piece, so there had to be some degree of pause. Maybe it just could have been shorter.

Next up was Saunders’ Berceuse, a 2011 pas de deux that I first saw six years back on the DanceFAR benefit program. Danced at this performance by Jackie McConnell and Michael Wells, the contemporary duet is all about breath, suspension and directional intent. And definitely egalitarianism. McConnell begins with a solo phrase, which leads into partnering and unison (again, impressive synchronization) with Wells. Then, midway through the work, Wells takes his turn embodying that same phrase. Berceuse doesn’t feel particularly story-based or like it was relaying any linear narrative, but it does have an emotional charge. There’s an unmistakable tenderness between the couple and yet their hands seem to be continually reaching out for something else.

Then came the hiccup – the premiere of Wells and Loman’s Two One Self. I can’t stress strongly enough that the issue was not the choreography nor the dancing. My complication was that I wasn’t able to watch the piece because it was filmed with a shaky camera effect. Not all the time, but enough that it activated my motion sickness. And of course, that’s just my own personal thing; I’m sure most viewers had no problems whatsoever.

Excerpts from Marius Petipa’s The Sleeping Beauty (1890) closed the Balanchine & Beyond program, staged for Diablo by Joanna Berman. Farris and Lee took on the principal roles of this Act III wedding with elegance and grace, joined by the rest of the company in the coda section. The entire scene was as grandly classical as could be. Pillowy port de bras, subtle epaulement and textbook positions of the body – arabesque, attitude and passé. And Roberto Vega-Ortiz’s fouetté combination was sheer majesty.

Balanchine & Beyond continues this coming weekend!