Two dances in this year’s San Francisco Arts Festival, which will run from May 23 to June 2, explore the nature of relationships: in one, their complexity; in the other, their simplicity.

Today more than ever, men and women face the difficult task of defining themselves in the complex world of traditional gender concepts. The ongoing tug-of-war between the sexes for power and dominance drives men and women to collide with one another as they seek to validate their own existence. The battle rages on while fear, doubt, and an obsessive quest for perfection add fuel to the fire. The desire to feel something –to feel alive – leads them to commit desperate acts.

These are the themes of Complex des Genres, an award-winning piece from Compagnie Virginie Brunelle, which will make its U.S. debut at this year’s Festival. Because men and women are thinking, conscious beings, Brunelle would have us believe there is hope. Men and women can move beyond the bounds of traditional gender constraints to experience growth, acceptance, and love, with the end result being a surprising outcome. Some have said that Brunelle is a hardcore romantic (her musical choices include Chopin and Schubert) who wants to bring both sides of the complexity together. 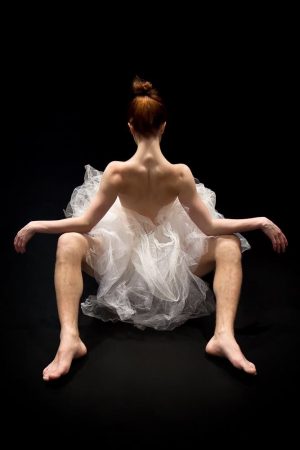 This piece from is one of Brunelle’s earlier signature works, known for its physical, acrobatic choreography and cinematic-style visual poetry. The opening scene, for instance, is a visually stunning tableau, a melée of the sexes, rich and wildly abandoned. Her work is emotional and real, a study of the human condition, often imbued with keen psychological insights balanced by an earthy sense of humor which has made her a rising star in her own country of Canada and in Europe, where she has received commissions to create new work in major houses.

Brunelle founded Compagnie Virginie Brunelle in Montréal in 2009, after she graduated from the Université de Québec à Montreal in 2007. She has since created five full-length works that have toured four continents. Her work is known for sensitive, raw performances, with a cinematic quality of her compositions, her vocabulary of staccato rhythms and coarse movements seeks to deconstruct traditional codes. Although many of the steps have a recognizable foundation of classical ballet, she refers to her choreography as ‘ballet cassé’ or broken-down ballet, characterized by movements that constantly alternate between tension and release. The steps are loose and give way easily to force and gravity, while her gestures share an affinity with daily life. It’s a powerful alchemy, simple in its eloquence, powered by an emotional punch. She often explores the interplay of human emotions and the poetry of real-life everyday existence, and her ongoing quest for humanity and authenticity influences both her subject matter and her choice of collaborators. She seeks an intimate connection with her audience by constructing unique shows that strike a powerful emotional chord.

The engagement of Compagnie Virginie Brunelle is made possible in part by the Canada Council for the Arts and Global Affairs, Canada.

Can the power of being together counter individual loneliness? Are there boundaries between us when we come together? In the U.S. debut of Together Alone– a solo danced as a duet, with two bodies living in a perfect symbiosis – real-life husband and wife team Zoltan Vakulya from Hungary and Chen-Wei Lee from Taiwan explore the answers to these questions. The dancers encounter each other as their most naked selves, without external concealment or decorations as they search for the difference between being alone next to someone and being together with someone. Their bodies are like magnetic objects which fold and unfold in each other, merging and separating, giving and receiving, testing the invisible border between their seemingly connected bodies. Ultimately, they learn, through compromise and cooperation, to face their respective loneliness, together. 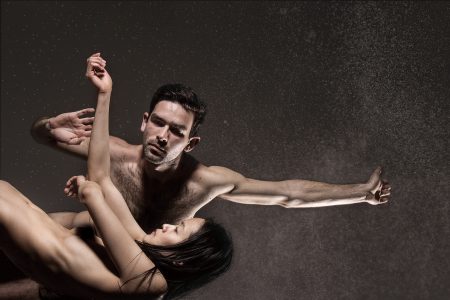 This signature work, choreographed and performed by Vakulya and Lee, might be described as an artful adventure in bodily shapes and forms. Throughout the piece you see a lot of muscle tension, how they use force to counterbalance and work together. They chose to forgo any sort of costume because they found that even if they covered themselves with just thin fabric the finer details of their muscular lines were no longer visible and the dance lost its strength.

Lee has described the dance simply as connection, purity, and aesthetics. But it is also a personal story, as it mirrors the real-world lives of these two dancers. As freelance international performers with different companies, Lee and Vakulya (who reside in Belgium when they are not touring) find themselves sharing precious few moments together. They chose to devote some of these moments to choreographing a piece about this aspect of their lives. The two dancers have been trained quite differently, so coming together to find common ground in their collaborative choreography has been a challenging and enriching process. This is the first dance they have made together, and, unlike real-life, they gave themselves a task: to never let go of each other from the start to the end.

Lee began her career as a dancer with Batsheva Dance Company, where she worked closely with Ohad Naharin, Sharon Eyal, and Yasmeen Godder. She has also appeared as a guest artist with Gothenborgs Operas Danskompani, Tanztheater Wuppertal Pina Bausch, and VOETVOLK/ Lisbeth Gruwez. She is a freelance dancer, choreographer, and Gaga teacher, and works all over Europe with Jerome Bel, Marina Mascarell, and Marcos Morau, among others.

Vakulya graduated as a dancer in SEAD (Austria) after studying dance and choreography in BKTF (Budapest). As a dancer/ performer/ collaborator, he has worked with choreographers, composers, and visual artists including Kendell Geers, David Zambrano, Hód Adrienn, Octavi Rumbaou, Benjam Vandewalle, Radouan Mrziga and Georgia Vardarou. Since 2011 he has been creating on and off-stage performances (PAUSE (2012), OneTwoThreeOneTwo (2015), Together Alone (2016), It’s time (2017), Etudes on machines (2018)/ which he presented across Europe, USA, Brazil, South Korea and Taiwan. Most recently, he has collaborated with the Shih Chien University in Taipei, working with new media design students as a guest professor. He is currently working for Hodworks (Budapest) and Mal Pelo (Barcelona), and creating a new solo work with Lee called kNown face.

The 2019 Festival will run from May 23 – June 2 and feature over 50 artists and ensembles from the Bay Area and 12 other countries performing in multiple venues at the Fort Mason Center for Arts & Culture. Zoltan Vakulya and Chen-Wei Lee will perform Together Alone on May 24, 25 and 26, and Compagnie Virginie Brunelle will present Complex des Genres on May 30.