The Living Earth Show and Post:Ballet present Do Be
Z Space, San Francisco

Wei-Shan Lai & Dancers – What Do I Remember
Z Below, San Francisco

August 4th – Get set for a deliciously wild ride of imagination, whimsy and capriciousness with Do Be, an artistic experience created by Post:Ballet and The Living Earth Show. Post:Ballet’s Artistic Director Robert Dekkers and The Living Earth Show co-founders Travis Andrews and Andy Meyerson have launched a production filled with innovative choreography and narrative revelation set amidst epic unconventionality. In addition, Do Be speaks to the convergence of compositional independence and interdependence. Each of its six individual chapters is its own unique theatrical container, featuring a different commissioned score, performed live by Andrews on guitar and Meyerson on percussion. And yet there is an undercurrent of connection running through. The resulting full-length work takes a deep dive into creative collaboration and explores the choreographic, musical, design and conceptual possibilities within twenty-first century dance theater performance.

A mystical prelude of sorts, Pasturing I served as an introduction and invitation into the strange and unusual world of Do Be. Right from the start, the notion of extremes rang clear. Slowly the dancers entered the stage, costumed in a heady mix of futuristic metallics and romantic gauze, by Post:Ballet Creative Director Christian Squires. Jacob Cooper’s ambient, atmospheric score was peppered with sounds of breaking dishes and power tools, which happened live in an opaque onstage cubicle and was projected on the floor downstage center. Unison duets and partnered pas de deuxs emerged in the space; Dekkers’ choreography varying from specific gestures to high extensions to Graham-inspired pleadings, spirals and floorwork. The mood shifted from measured and meditative to dramatic and expansive and back again. You didn’t know what to expect from one minute to the next, and that was glorious.

I had seen the next two chapters before, on separate occasions – Family Sing-A-Long and Game Night last summer and Tassel in the fall of 2014. Many of my original observations held true, though with both there was also an opportunity to experience newness. Family Sing-A-Long and Game Night posits the familiar – well-known folk and children’s songs, egalitarian movement and party games – repetition, accumulation and crescendo bringing a sense of theatricality to each. But at its core, Family Sing-A-Long and Game Night is all about defining oneself in situations that are steeped in assumption – challenging constraint, messing up structure, confronting the appropriate. This could not have been clearer in the ‘chair sequence’. As the company sat in chairs, moving in unison, their feet twitched, they swayed back and forth, they drew their knees to their chest. It looked like a group of children or adolescents (or maybe even adults) struggling with certain expectations of behavior. While half of the company cleaned up the birthday cake that had been presented to and wrecked by Charles Martin at the end of Family Sing-A-Long and Game Night, Tassel began to unfold, and the notion of extremes was revisited. At first, its series of gestures and sculptural poses seemed somewhat sedate and calm. But quickly, that stylized physicality built and grew into a chaotic frenzy. Bodies ping-ponged all over the stage, clothes were discarded; a group of individuals disengaging with one reality and searching frantically for another.

The Bell, The Ball, The Bow-Tie & The Boot signaled the second half of Do Be. Four dancers in rolling mobile wardrobes encircled a soloist (Kar Will.), while swarming patterns were projected on the stage floor. Throughout the lengthy sequence, Cora Cliburn, Aidan DeYoung, Gabriel Mata and Vanessa Thiessen would emerge from their wardrobe cocoons in different costumes to engage with Will. in a variety of interactions. It felt ancient and apocalyptic, primal and mysterious, all at the same time. I also couldn’t shake a retro, old school video game vibe. And while this segment felt a little long, there was plenty to capture the attention, from gorgeous upside down balances (on the neck and shoulder) to platform pink high heels. Even gummy worm candy made an appearance. 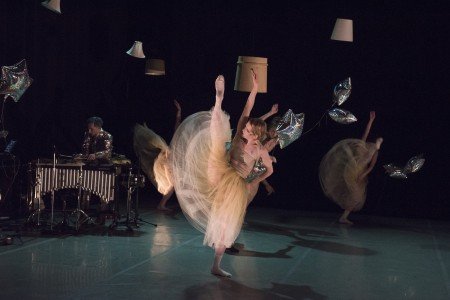 Rachel Coats with Andy Meyerson of The Living Earth Show
and the dancers of Post: Ballet
Double Happiness from Do Be
Photo: Natalia Perez

By far, the highlight of the evening was Double Happiness, a flowing ensemble dance, gorgeously led by Rachel Coats. In a yellow tulle skirt with balloons attached to her back, Coats began sweeping through the space – developpés soaring in second position, high relevés freezing in time. Following her phenomenal solo, Coats was joined by four similarly costumed dancers (Cliburn, Caroline Langner, Martin and Jackie McConnell) and by Will. A feeling of forwardness, encouragement and community overwhelmed the stage. But Double Happiness was still avant-garde, to be sure. As the five yellow-clad performers stood on an angle, vibrating their hands, moving shoulders up and down and shaking their heads, it was like Serenade had been injected with a high dose of nervous energy and anxiousness.

Pasturing II ushered Do Be to its conclusion. Though it was the final chapter on the program, it was actually the first time that the entire company was onstage together. They traveled from the back of the space towards the audience, first in slow motion, and then moving with increased power and drive. Giant lifts, cantilevered partnering and dizzying spins were interspersed with moments of repose. Suspension and release informed movable group structures that came together and broke apart, only to be reformed somewhere else. And in a lovely cadence, the entire Do Be village descended on the stage, led by Dekkers, Andrews, Meyerson and Squires – every collaborator celebrating and delighting in this considerable artistic accomplishment.

August 27th – Four dancers entered the space and began repetitive motions – a pivoting foot, a torso melting to the side, an arm bent and then straightened. As each cast member repeated these various choreographic tasks, their eyes and heads tried to follow and comprehend the movement. But the body and mind couldn’t quite connect; they were purposefully disjointed. Desperately trying to work together, these two entities were consumed by crossed channels, lost in a sea of mixed messages. 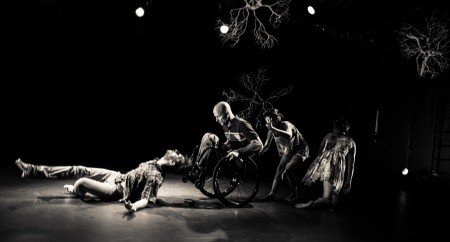 How are the physical and the neurological related; how do the body and brain respond to loss, grief and fear; how can recollection and repetition lead to new pathways and connections – these are the themes that lie at the heart of What Do I Remember, a new world premiere by Wei-Shan Lai & Dancers. Artistic Director/choreographer Wei-Shan Lai has assembled a host of talented collaborators to bring What Do I Remember to life – media designer Olivia Ting, scenic designer Chih-Wei G.V. Chang, lighting designer Heather Basarab, composer Ben Juodvalkis, cinematographer Joel Wanek and neuroscientist Yu-Wei Wu. And the entire project speaks of ingenuity, innovation and authenticity.

What Do I Remember is full of recollection, mostly expressed through storytelling. All four dancers (Yuko Monden, Kiplinn Sagmiller, Dwayne Scheuneman and David James Silpa) share vulnerable personal narratives, including Scheuneman’s tragic recounting of how he lost the use of his legs. With these recollections, Lai is demonstrating how the act of speaking something out loud, the act of telling, the act of expressing can in itself build new pathways in the brain and in the body. It isn’t about forgetting what happened; it’s about understanding your relationship with that memory today.

Repetition also played a huge role in What Do I Remember, again in an effort to reflect the creation of new physical and mental pathways. Text phrases (“everything will be okay”) were repeated; group lifts were sequenced; a gorgeous penchée arabesque/rond versé recurred. And as these elements repeated, you could see them change and evolve, just like memories.

Choreographically, there was also a significant shift over the piece’s forty-five minutes. The initial detached, jarring movement phrases became more fluid, indicating a different bond between the body, mind and spirit. And there was one lengthy section in the middle of What Do I Remember that deserves special mention. All four dancers were sitting cross-legged on the floor, cycling through a series of arm gestures. It was so tranquil and meditative, like as a community, they had found a special sense of peace through a practice of mindfulness.

Dancing in the Desert