December 10th – Usually I make only one December visit to the War Memorial Opera House, but his year, I’m making two trips. One, for the familiar yearly classic, San Francisco Ballet’s Nutcracker. The other, a first for me. This past weekend, I took in the closing performance of San Francisco Opera in Girls of the Golden West, a new full-length, two-act work composed by the much-celebrated John Adams, with libretto/direction by Peter Sellars and choreography by John Heginbotham.

Girls of the Golden West transports its audience to Northern California’s gold country, to mining camp life in the mid-1800s. And while this opera is seated in that time and era, it is really about the people who lived and experienced everything that the gold rush held, telling their stories of hope, possibility, determination, desperation, infidelity, paranoia and ultimately, savagery. In the opera’s three plus hours, Dame Shirley, Ned Peters, Joe Cannon, Ah Sing, Josefa (and more) take the viewer on a journey where extremes reign – moments where infatuation and heartbreak meet as do wins and losses, and most telling, humanity and inhumanity. 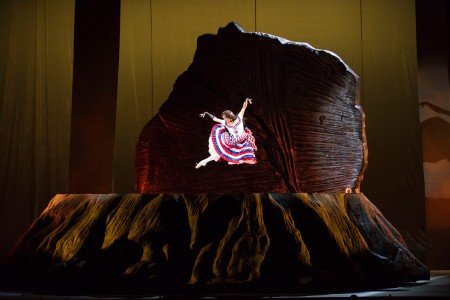 Choreographically, Act I is made up mostly of stage movement, both for the soloists and for the chorus, though there were a few stylistic, dance-y interludes. A sweet, frontier-inspired, square dance duet for Ned (Davóne Tines) and Dame Shirley (Julia Bullock) unfolded early in the Act. And then, once the narrative made its way to The Empire Bar, a mining encampment saloon and brothel, there were a number of gestural movement phrases for the women corps dancers.

Act II begins with a “show within a show”’ a Fourth of July celebration being performed for the miners on a large stage platform, cleverly fashioned as the trunk of an enormous Redwood tree. The corps dancers opened with percussive steps, pinwheel formations and folk-inspired sequences of pas de basque. Then, Lorena Feijóo (former Principal Dancer with San Francisco Ballet) entered the space as Lola Montez and offered Montez’s Spider Dance. Heginbotham’s choreography for this featured solo mixed intrigue with vigor, all steeped in classical ballet structure and pointe technique. Filled with sky-high Russian pas de chat, riveting bourées and an extreme extension in second position, Feijóo communicated each step and phrase with her signature passion and fire. And throughout the dance, she threw her hand outward like she was spinning a web of spider silk. Though sadly, if you were sitting in the orchestra section of the theater, you probably missed much of the footwork because her pointe shoes were partially obstructed by the set.

Girls of the Golden West felt a bit long, but not because it was three hours and fifteen minutes, because there were several scenes that could have been shortened. Yet at the same time, the arc of the three main relationships didn’t feel completely fleshed out. And strangely, on Sunday afternoon, the sound was a little curious. A number of times, the soloists were very hard to hear, and it didn’t seem like a piano or pianissimo dynamic marking in the score. It really felt like a sound balance issue.

December 22nd – Last Friday, I made my second December excursion to San Francisco’s War Memorial Opera House. While less than two weeks since my first visit, the vibe was entirely different. The resplendent lobby had been decked to the nines and patrons were dressed in their most festive finery. San Francisco Ballet had arrived in the space for its annual Nutcracker engagement, the classic two-act story ballet that follows the enchanting Christmas Eve journey of Clara, Uncle Drosselmeyer and the Nutcracker Prince.

I’ve seen this particular version (created by SF Ballet Artistic Director and Principal Choreographer Helgi Tomasson) most years since its premiere in 2004, and have already commented on the narrative arc, design and choreography for particular sections. But that doesn’t mean after ten plus years that there’s nothing more to say about SFB’s Nutcracker, especially if you look at the performances by the artists of the company in the various roles.

After the overture and prelude scenes, the company and students from the San Francisco Ballet School invite the audience to the ever-elegant Christmas Eve party at the Stahlbaum’s. The children delight in the decorations and in their gifts, especially Clara (Chloe Treanor) who receives a Nutcracker doll from her Uncle Drosselmeyer. All the celebrants are transfixed by Drosselmeyer’s (Val Caniparoli) otherworldly entertainment, including the three full-size figures that he brings to life. These three short solos are always a highlight of the act, and they were again this year. Lonnie Weeks had uber-flexibility as the jester/mirliton character, Julia Rowe tackled the doll’s relevé-heavy enchainment with ease and confidence and James Sofranko cycled through parallel sissones and fouettés with precision and specificity.

The dream/fight sequence is never my favorite part of any Nutcracker, but Tomasson’s does have some nice moments: the reappearance of the dolls from the party scene, the King of the Mice (brilliantly characterized once again by corps member Alexander Reneff-Olson) and of course, the Nutcracker Prince becoming real. Once the battle is finally over, the best parts of the Act, maybe even of the whole ballet, unfold: the brief Clara/Nutcracker duet, in which Joseph Walsh was every bit the Prince – regal, debonair and gallant in every balance, turn and jump. And then the wintery forest scene, led by the Queen and King of the Snow, danced at this performance by Lauren Strongin and Wei Wang.

As Strongin and Wang began their opening pas de deux, with its grand lifts and partnered turns (including a low attitude spin that awes), the snow was already in a steady descent. The women of the corps de ballet (which on Friday night also included some of the apprentices and senior trainees from the school) joined the scene for the delicate, yet technically challenging variation: quick jetés, emboîtés in sequence and posé arabesques. This was all accomplished while a Sierra Nevada Mountains-style storm whirled about, with so much snow that whenever the dancers were at the back of the stage, unfortunately, you could barely see them. It was the only downside to an otherwise idyllic experience. 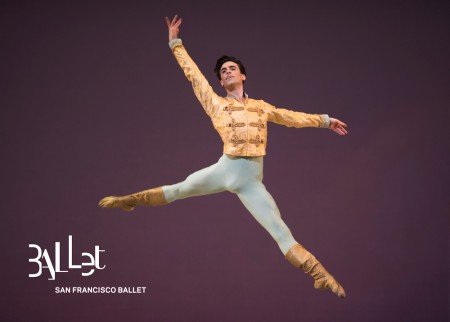 Then we were off to another destination entirely for Act II. Sometimes referred to as the “Land of the Sweets,” in Tomasson’s Nutcracker, it is the Crystal Palace, presided over by the graceful and stately Sugar Plum Fairy (Sofiane Sylve). And after some onstage storytelling, the Act II divertissements get underway. The Spanish pas de cinq (Wona Park, Lauren Parrott, Blake Kessler, Sofranko and Myles Thatcher) had some of the best unison I’ve ever seen in this variation. Similarly, the lengthy French trio, in which Kamryn Baldwin, Ludmila Bizalion and Elizabeth Mateer have to navigate their pointework while twirling hand-held ribbons, also had a standout sense of special awareness. As the lead in the Russian dance, Daniel Deivison-Oliveira wowed the audience with his successive split jumps in second. There was so much loft and punctuation; it looked like he was jumping on a trampoline. Sylve led the Waltzing Flowers with super high extensions and multiple turning sequences that had both speed and exactitude. And then came the grand pas de deux, its solos and coda, danced by Walsh and Maria Kochetkova. While the first duet features thrilling shoulder lifts and the coda, superb turning phrases by both dancers, Walsh really stole the show. His solo was marked by exceptional pirouettes and multiple tours and he completely astonished with his fouetté series in the coda, arms alternating between second and fifth.