December 7th – In any Cal Performances’ dance season, there is much to luxuriate in. New chapters in decades old artistic collaborations; a wide swath of choreographic genres and styles; and a curiosity for newness. One of the ways the longtime arts presenter embodies this final quality is in its programming design. Most years, Cal Performances includes one or two (sometimes more) companies that have never performed in the Bay Area, exposing regional audiences to a fresh creative voice and perspective. This past weekend brought one of these debuts – Pavel Zuštiak and Palissimo Company in 2015’s Custodians of Beauty. An eighty-five minute conceptual collage directed and choreographed by Zuštiak and performed by the incomparable trio of Viktor De La Fuente, Emma Judkins and Justin Morrison, Custodians was both cool and thoughtful. 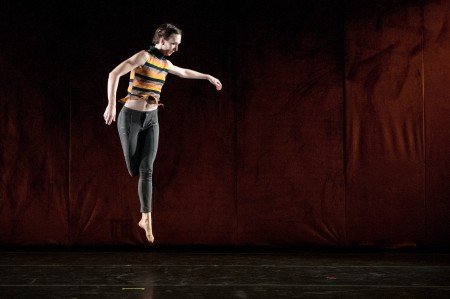 Zuštiak included some commentary in the program, which concluded with a two-part question, “where do we find beauty today and does it need our defense?” While I’m not sure that I saw the latter line of inquiry, I was struck by how the former sentiment rang clearly throughout the work. Whether an extended movement vignette or a short creative snapshot, scene after scene oozed simplicity and purity. Physicality was unhurried and smooth; arm gestures, uncomplicated and natural; directional shifts, clear and precise. Small motions were celebrated and mined, like the movement of the head or the gaze of the eye. A giant smoke cloud was cast into the audience and simply allowed to dissipate; a vocal offering (which incidentally was performed with incredible musical prowess) hung hauntingly in the air. Every artistic idea in Custodians was distilled to its very essence; no pretense, no extraneous stuff. I found this particularly impressive seeing as how the piece employed so many different disciplines – sound, text, visual art, effects, choreography, video, song. But in Custodians, movement was movement; song was song, text was text. Not a hint of spectacle or ostentatious-ness cluttered Zuštiak’s varied artistic explorations.

While a paragon of clarity and distillation, Custodians did have some challenges. For those of us who suffer from any kind of motion sickness, the first moments of the work, with its bouncy, shaky videography, certainly triggered it. For the most part, I found the score to be compelling, though it occasionally ventured into uncomfortable territory – high-pitched soundscapes and atmospheric tremolo that left the ears ringing. While that kind of discomfort can certainly be purposeful, in this case, it distracted from what was happening on stage.

And at close to an hour and a half, Custodians was far too long, especially because some of the chapters felt like they could have been edited. For example, one lengthy section found De La Fuente, Judkins and Morrison moving methodically through a series of cluster sculptures. The transitions were slow and small, close to Butoh in their tempi. I was into it; the shapes and living figures they were creating were really something to behold. But as it continued and continued and continued, the idea lost its early potency. For me, the pull and magnetism of the first few postures had disappeared. The same was true for a later sequence of patterned aerobic running, bouncing and hopping. Again, interesting and dynamic, but just too long. Finally, there was a moment when the lights went up and the three performers ventured into the house. Each invited an audience member up on stage for a brief standing pause, after which they returned to their seats. I’m all for exposing the porous boundary between the performer and the viewer, but this didn’t feel like it served the piece at all. In fact, it brought unnecessary clutter to an otherwise uncluttered theatrical container.

December 21st (matinee) – Celebrating the past and looking towards the future has been a theme at Smuin this year, with the contemporary ballet company marking its twenty-fifth anniversary season. That sentiment certainly rang true in 2018’s edition of The Christmas Ballet, which is just about to finish its annual San Francisco run at Yerba Buena Center for the Arts. Featuring thirty distinct, festive dance vignettes, the two-part wintry revue paired choreographic favorites from years past with more recent additions as well as two world premieres. As always, the performance moved along at a brisk pace – if a particular dance or piece of music wasn’t your speed, something new would be along in short order. 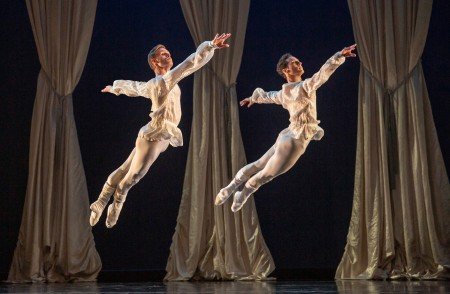 If you’re a fan of traditional ballet vocabulary and sweeping scores, Act I’s”‘Classical Christmas” is a great fit. The cast is costumed in sparkling, bright white; the staged is adorned with large billowy fabric swaths; and the subtle lighting sets a demure mood. Several works stood out amongst this first group of fifteen. Terez Dean Orr and Robert Kretz in company founder Michael Smuin’s Hodie Christus Natus Est were the epitome of elegance and grandeur. One cannot ignore the abundance of lovely lines and steps, but what sets this pas de deux apart are its unexpected moments. Supported jumps had surprising landings, finishing en pointe but with the leg in plié; lifts would spin backwards with the shoulders being the only point of connection between the two. Longtime Smuin Choreographer-in-Residence and now the Artistic Director of Sacramento Ballet, Amy Seiwert’s Caroling, Caroling, Bright, Bright tackled the complex pas de cinq configuration, and in doing so, revealed its compositional potential and promise. Premiering this year was former company artist Rex Wheeler’s God Rest Ye Merry Gentlemen, a duet danced by Mengjun Chen and Ben Needham-Wood at this matinee. While the choreography itself was a bit busy for my taste, the pairing of Chen and Needham-Wood must be acknowledged. They can do it all – turns, jumps, batterie, balances – and in such precise unison.

Delightful Celtic influences also found their way into The Christmas Ballet’s classical offerings. An ensemble dance choreographed by current company dancer Nicole Haskins, Fantasia included a hearty dose of delicate petit allegro – cabrioles abounded as did Italian changements. Fueled by a waltz clog rhythmic base, Smuin’s The Gloucestershire Wassail contributed its own Celtic flair, coupling fast footwork with a quiet upper body. I loved the choreography in each, but in addition, both dances brought a tone of community, playfulness and fun to an act that tends to be more reflective and earnest in quality and atmosphere. 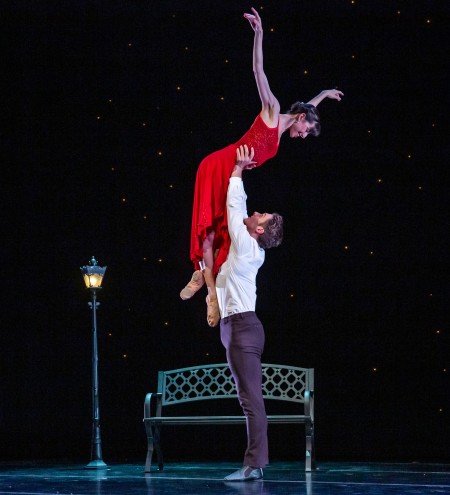 Speaking of fun, Act II’s “Cool Christmas” was filled with it – musical theater style vignettes, vivacious characters, an impish Christmas tree, even surfers avoiding a shark. The packed house (on a Friday afternoon no less) was enthralled and entertained by the festive mosaic, as was I, though I was more pulled to the dancier episodes and less to the novelty ones. Another work by Haskins, J-I-N-G-L-E Bells had some impressive rhythmic depth. I can’t be sure if this particular rendition of the famed Christmas song was actually composed in different meters, though the choreography certainly reflected a change in pulse, making it both riveting and buoyant. With a winning collection of stomp time steps and cramp rolls turns, Shannon Hurlburt’s Rudolph the Red-Nosed Reindeer introduced yet another rhythmical element to the program. It’s a super tap duet (danced by Maggie Carey and Valerie Harmon), though there was a tendency to try and fit too many steps into a single phrase. But it was the sophisticated, chic, lyrical pas de deux that were the stars of the second half. Lauren Pschirrer and Needham-Wood, in the world premiere of company dancer Erica Felsch’s Meet Me in the City on Christmas, were the tops. With starry lights and a park bench framing the glorious, grand movements, the scene could have easily been part of an old Hollywood movie musical, and Pschirrer and Needham-Wood looked absolutely stunning together. Harmon and Peter Kurta were equally sublime in Seiwert’s River. Every time I see this dance, that amazing straight-legged fifth position spinning lift takes my breath away.

December 22nd (matinee) – Live orchestral accompaniment makes such a difference when it comes to dance performance! The last time I was at the Paramount Theatre for an Oakland Ballet Company program, I commented that at times, the recorded mix was so clippy and loud that it distracted from what was happening on stage. Not so yesterday for the opening of Graham Lustig’s The Nutcracker. As has been the tradition in past years, the Oakland Symphony, under the direction of Michael Morgan, and the Piedmont East Bay Children’s Choir joined the troupe for their annual pre-Christmas run of the story ballet. Live music combined with a festive narrative and splendid dancing made for a simply magical afternoon at the theater. 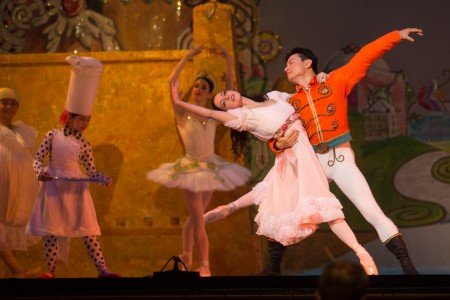 Artistic Director Lustig’s version of The Nutcracker is a classic one, told through the eyes of Marie, the ever-riveting Ramona Kelley, and her Nutcracker Prince, the confident, poised Seyong Kim. But classic should not be confused with standard or stale. To the contrary, this Nutcracker has innovation and creativity to spare. This Christmas Eve party is filled to the brim with energy. Many different characters arrive to celebrate the season, including Marie’s Cousin Vera (Jackie McConnell) and her suitor (Thom Panto). Marie seems completely taken with them both, so what a perfect plotpoint that is they who later transform into the Sugar Plum Fairy and the Cavalier. In this adaptation, Uncle Drosselmeyer is a much dancier role, handily portrayed by Vincent Chavez. He is wonderful addition to the fête, which is awash with intricate and interesting choreographic episodes. And with dancers! So, so many dancers! The cast’s spatial awareness was absolutely second to none – I didn’t notice a single collision during the party’s many dances. It’s only too bad that a lot of the choreography was hidden. With the presents arranged in a large pile, front and center, much of the footwork and pointe phrases were obscured from view.

Lustig keeps the battle scene moving along (which suits this viewer just fine), with winning choreography for the Nutcracker. Until he removes his mask, the steps are appropriately stiff and mechanical, framed by flexed feet and angular arms. Then he transforms into a real being and the choreography similarly shifts. Gone are the mechanized steps, having been replaced by swirling lifts, dipping turns and jeté entrelaces. The Nutcracker’s first pas de deux with Marie had such joy and levity, flowing effortlessly into the wintry snow scene swirling with snowmaidens and snowballs. 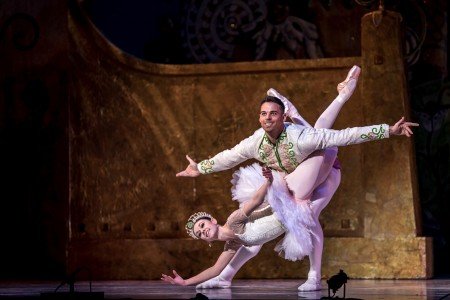 The charm continued as Act II’s divertissements took over the stage – Spanish, Arabian, Chinese Nightingale, Russian and German (often French in other renditions). With its changements en pointe and Russian pas de chats, Nina Pearlman’s nightingale variation was a stand out amongst the group. And though it might have been a little finicky from time to time, I also quite enjoyed the choreography for the German pas de quartre. But the internal bows from all these soloists and small groups – to the audience and then to Marie and the Prince – definitely needed to be sped up. The breaks created a rather halted stop and start feel. That is until the waltz of the flowers got underway and the action picked up again with pulsing, billowy choreography lead by Marie and the Prince. And McConnell and Panto were probably the best Sugar Plum Fairy/Cavalier duo that I’ve ever seen at the Oakland Ballet. He with sky-high extensions and impressive fouettés; she with enviable pointework, serpentine rond versés and impenetrable balances. They were truly a regal pair, ideal monarchs to reign over the land of the sweets.