Pilobolus has been around for 45 years. Today when I saw the company, I fondly remembered seeing them many years ago, when I was maybe ten years old, and then participating in a master class perhaps a decade or so back. Pilobolus feels like an old friend. This “old friend” remains popular with many people of every age. It was rewarding to see that range in the audience: grandparents, parents, and children. The appeal of Pilobolus is so wide that folks who don’t normally go to see dance or theater rush to get tickets.

Shadowland, which premiered in the United States in November 2015, brings humor and creativity and marvels of human flexibility, like all Pilobolus works, but there’s a serious, and sometimes scary overtone to parts of this evening-length narrative piece about growing up. Mostly, though, the story is sweet. The creators of Shadowland, along with contributions from the original cast members, number 15 people. The original music is by David Poe, the lighting design by Neil Peter Jampolis, set design by Neil Patel, and costume design by Liz Prince. Nine dancers athletically tell the tale.

A girl on the brink of womanhood, Heather Jeane Favretto, embarks on a journey of self-discovery. It may be only a dream, but it’s a captivating one. In her dreams, the girl is magically transformed into a dog. The dog, who carries a hobo’s bindle, is chased by chefs with big knives, catches a pickup ride with a cowboy and experiences the blush of first love. There are also fire-breathing monsters and a trippy underwater journey. Much of the show, not surprisingly given its title, is made up of shadow-theater. The dancers’ bodies, paired with lights and screens, make human images as well as images of dozens of other things — flowers, crabs, elephants, windshield wipers. Much of the enjoyment of Shadowland comes from attempting to identify which body parts make up the various shadow images. Fingers, rear ends and bent backs can become tricky to discern, especially when bodies meld together to make a single form. 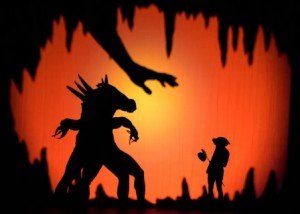 In the beginning, the girl is surrounded by other dancers who are enchanted spirits of sorts. They lift her into a white nightie. Crouched on their knees, three male dancers form a bed on which she rests. In her dreams, the bed comes to life, rocking and swinging her gently across the stage, up and down and all around. Eventually, the bed literally rolls away. The girl is transported to another world, not unlike Alice in Wonderland. She encounters puzzling objects and creatures, poking at them. Sometimes they poke back.

At a critical juncture, taking a bent elbow to form a snout, the girl becomes the shadow of a dog, a very cute one at that. The dog’s ears bend and flutter in the wind, her tongue can lick a wound, and of course, her tails wags. She can also howl at the moon.

The dog character experiences some frights and some moments of ridicule, as well as heartbreak and romance. That’s pretty much what growing up entails. There’s also a section involving a kidnapping by burlesque circus members that force the dog to jump through hoops and whip the dog when she doesn’t meet their demands. I’m not sure what that’s supposed to represent. Maybe bullying? Ultimately, the tale is uplifting, and the girl seems prepared to proceed confidently into adulthood.

Some of the most fun in Shadowland occurs after the first curtain call. The dog reemerges and goes on a tour of New York City, visiting the city’s famous sights. It’s amazing how accurately the dancers can portray, in shadow, things as diverse as subway seats, the New York Public Library’s marble lions, and a woolly mammoth at the American Museum of Natural History. But the real fun came when Pilobolus honored the city in which it was dancing. The audience roared with approval at the Lincoln Monument and particularly at a parade of marchers from the recent Women’s March, including a marcher holding a sign saying, quite comically, “Puppy grabs back.” That gesture meant a lot given the tense political climate and the composition of DC voters, who overwhelmingly voted for Hillary Clinton for President of the United States rather than Donald J. Trump. 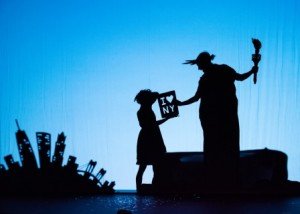 The co-presenters of this event were Washington Performing Arts and CityDance.

Pilobolus Maximus: Beyond the Limits of Dance

A journey into scaryland: Pilobolus in Shadowland