Even within the exoticism of the Far East, Shanghai holds a special magic. As one of the Chinese cities open to foreign trade it has always had a cosmopolitan gloss and is remembered as the city where Margot Fonteyn, then still little Peggy Hookham, received her first ballet lessons from Russian émigré, Vera Volkova.

Under the direction of Xin Lili, the dancers of the Shanghai Ballet are superb and Echoes of Eternity is beautifully dressed in costumes by Paris Opera étoile, Agnès Letestu with sombre and moody set designs by Jaya Ibrahim. It is a feast for the eye but sadly the paper-thin story-line and one dimensional characters made the drama remote and disengaged. 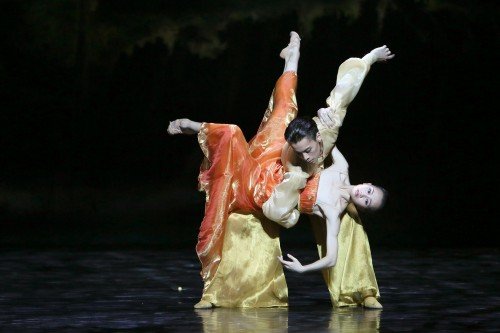 Choreographer, Patrick de Bana, is at his best in the several duets danced by the willowy Qi Bingxue as Lady Yang and Wu Husheng as the Emperor. Bingxue is an exquisite dancer: graceful and technically superb, she generated waves of passion in her slight frame while Husheng, a solid partner remained a lovelorn and rather shadowy figure. Working in bare feet and in neoclassical style the bodies draped and enfolded but there was little character development to engage the audience. The lovers had no back story, the tale no interesting twist: it was simply a tale of love, loss and heavenly reunion that gave the two excellent dancers few opportunities.

Even the addition of a frail and forlorn Moon Fairy, danced by Zhoa Hanbing did little to build any excitement. Hanbing is another beautifully trained Chinese dancers who rises to every technical challenge while never losing her fluid grace. She gave her all in an ambiguous role, hovering on the periphery of the stage like an omen. The programme notes written in verse gave few clues. More interesting choreographically was Zhang Yao as the noble servant, Gao Lishi, who managed to bring depth and sympathy to his role. 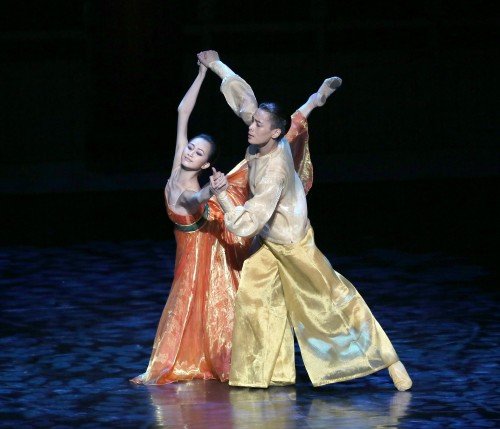 The company offered a large corps de ballet of maidens, wafting in dappled light, displaying metres of beautiful fabrics. They were contrasted by a cohort of well drilled warriors but the battle scenes suffered from unconvincing choreography and some ill-chosen music – Henryk Górecki’s Symphony of Sorrowful Songs. The modern sensibilities and reiterating cadences of this great work were at odds with the traditional confrontation, the one cancelling out the other in an interminably long confrontation. Little of the rest of the medley of music stirred the blood leaving a sadly disappointing evening where the dancers’ hard work and talent was all for little effect.