Cartoons, with their simplicity and directness are a particularly potent form of communication and within this field the Japanese art of manga has a special place. Manga comic books are full of super heroes flying to the rescue and punching the enemy clean off the page and Sidi Larbi Cherkaoui working with Bunkamura Theatre Cocoon transfers this excitement to the Barbican stage. The imaginative stage setting of multiple moving screens on many levels replicates the pages, as the plot transfers seamlessly across datelines. His Japanese cast harness their impressive range of talents in physical theatre, acting out the characters or forming a team of black-clad manipulators to help Atom (Astro Boy) fly. 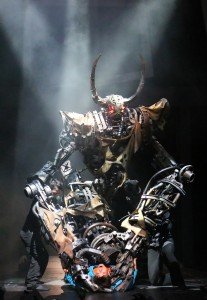 Following on from TeZukA (2011), his tribute to Osama Tezuka the creator of Astro Boy, Cherkaoui now offers a robot murder-mystery plot full of twists and turns. Japan is at the forefront in developing robots capable of replicating caring qualities and at the heart of the story is that elusive concept of what it is to be human. If it is their ability to lie and hate that distinguishes humans; might robots not be superior beings? Cartoons, in taking a step back from reality are a good medium to discuss these thorny issues and state some hard truths: ‘What is right and what is wrong? It is very difficult to know the difference’, muses a robot. ‘Humans don’t know how to process grief’, says another, ‘they just cry’. The subtitles are sometime difficult to locate as they appear on different panels but in this story the message is simple and direct. 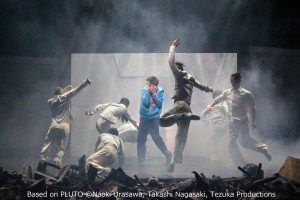 The cross-over between fantasy and reality permeates the characters and locations. The United States of Thracia invades the former kingdom of Persia to search of weapons of mass destruction, while the cynical mastermind, Dr Roosevelt, has the physical shape of a little teddy bear but with blazing red eyes. I was not unhappy when he had his head blown off. The characters, in Japanese style, tend to be sometimes too cute for sophisticated western tastes, but looking through and beyond there is much of value. Atom, is played by Mirai Moriyama, a star performance of thrilling physicality and all you would expect from the boy hero. The adorable pig-tailed Uran, (Tao Tsuchiya) is a spirited robot who most nearly encapsulates the best of all possible worlds. She also doubles as Helena, wife of the Gesicht, a masterpiece of German robotics played by Shunsuke Daitoh. 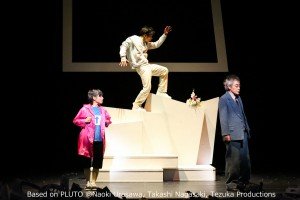 Cherkaoui has assembled a cohort of top notch dancers including, Ema Yuasa, Shintaro Oue and Kazutomi Kozuki who play minor characters in addition to skilful puppeteers. In the final battle between Atom and Pluto, the stage is brought to life by a huge ballooning cloth used cleverly to carry the protagonists and as a surface for brilliant lighting and video effects. Pluto, a giant articulated puppet, horned and monstrous, and Atom flying high is a techie triumph. It is a long show but one that offers both onstage thrills and ideas to mull over.