In celebration of Sidra Bell Dance New York’s 20th Anniversary Season, company Founder/Artistic Director/Choreographer Sidra Bell put together a program of eleven excerpts from her works for the company since its founding in 2001. The highlights show, dubbed IN|REP, presented by Mutual Dance Theatre, strung together those excerpts without pause or intermission to create a finely curated, deep dive into Bell’s aesthetic as a dancemaker. 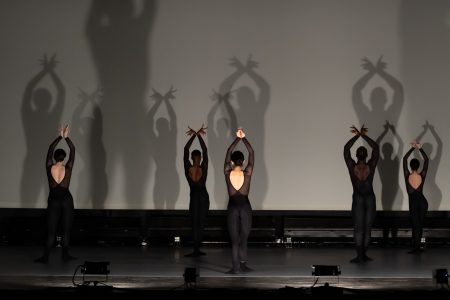 With a principal concern in her works, she says, of the “shape of the body,” Bell’s signature movement style, while of today in appearance, was also akin to choreographer Merce Cunningham’s classical modern dance works in their approach to laser focusing the viewer’s attention on the dancers’ form, line, and technique. Bell’s excerpts for IN|REP leaned heavily in that direction and were devoid of jumps, leaps, lifts, and pirouettes. 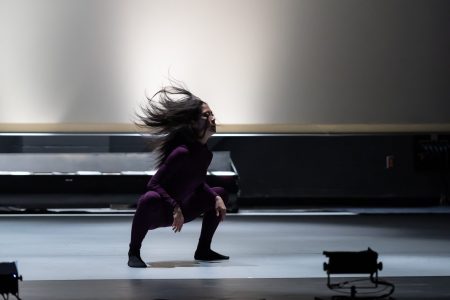 The 65-minute program began with dancer Mio Ishikawa seated on a darkened stage with no side curtains and in spotlight. Her legs at her sides, she contorted her body back and forth to a harsh industrial soundscape that loudly declared its dominance over the piece.  Four more dancers joined Ishikawa moving behind her along a diagonal shaft of light projected on the stage floor. The dancers outstretched and angled their arms and legs in a succession of dance poses looking like a moving sculpture. 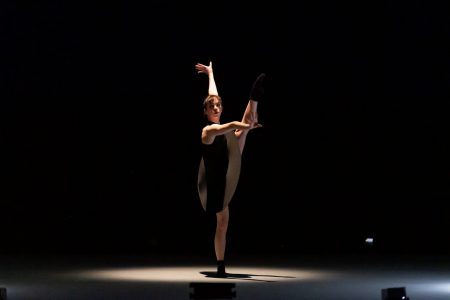 That sense of moving sculpture continued throughout the work, all accompanied by Bell’s eclectic collage of a soundscape that ranged from serene passages to tension-building and dramatic ones that at times were a painful assault on the ears. The only sense of transition from one excerpt to the next in the work came either in changes in the mood and tempo of that soundscape or in changes in the dancers’ costuming. Bell’s choreography for each was a consistent level of lush artistic exhibitionism. Nowhere was this better revealed than in your distance kept, an excerpt from Bell’s 2010 work ReVue. In it, dancer Kimie Parker, in spotlight and costumed in all black with white gloves and a mini black top hat, began a vogue-like sequence of dance moves. She was soon joined by her fellow dancers, each in their own spotlight and differently costumed; one in a flat disc tutu, another in a tulle skirt, and all dancing in socks. Their sharp, idiosyncratic movement was a microcosm of Bell’s movement style. 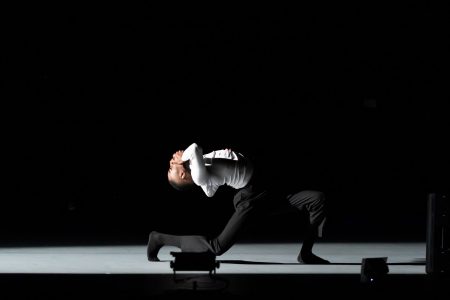 The first half of the program, both in the stage lighting and in the dancers’ costumes, had a black and white theme. With the stage lights often dimmed early on, it was as if our view was through a keyhole into the recesses of Bell’s mind where we voyeuristically glimpsed a surreal world filled with great beauty and the stuff of nightmares. 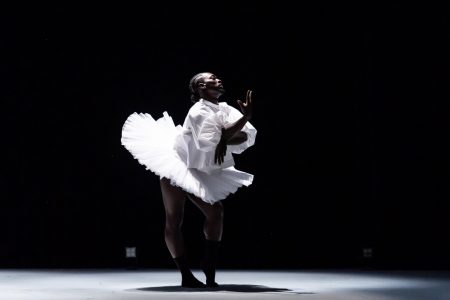 Of note in the program’s first half was a melancholy excerpt from 2011’s Grief Point danced to a voiceover of a man lamenting a composition that would never be heard, and dancers Gilbert T. Small II and Ishikawa both costumed in puffy white shirts and tutus gently articulating their hand and arm movements in silence in Savage Birds (2008). 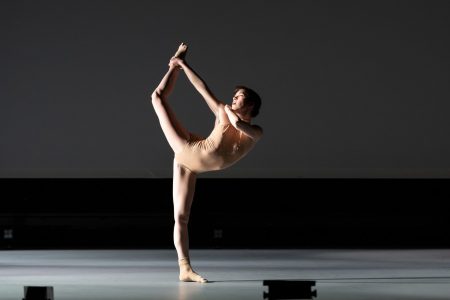 The first introduction to a color other than black or white came halfway through the program in the solo embraced (2018) performed by dancer Madison Hicks wearing a sparkling beige leotard. In it, she stretched and pulled her body in all directions and into high kicks. The wonderfully danced solo then gave way to an equally engaging pas de deux between Parker and the muscular Small.  Wheeling out a light pole to illuminate Parker, the two dancers then pulled at one another before leaning in and pressing their chins together. As if repelled by this sudden intimacy, the two then sharply pulled away from each other. The conflictive pas de deux was a captivating emotional struggle of physicality and will. 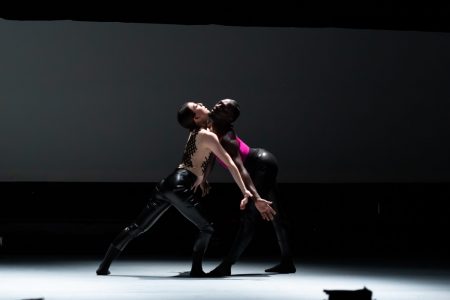 After a mesmerizing solo by Ishikawa in a purple bodysuit to sacred choral music and a voiceover clip from the movie “Blade Runner 2049” that spoke of how we recall memories with our feelings, and a solo by Parker in a mirror ball-like costume that sent tiny refractions of light across a white rear stage curtain looking like a cloud of gnats, the production ended as it began on a dimly lit stage in silence with Ishikawa this time surrounded by the rest of the cast who popped up from lying positions on the stage floor to sit and stare intensely out into the audience like a scene from a horror movie. And like the opening excerpt, Bell’s soundscape created an aural discomfort that agitated nerves, and along with the dancers’ movement built to a final sensory overwhelming crescendo. 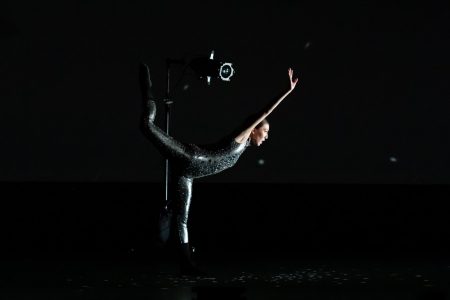 With fine performances by all the dancers, in the end, IN|REP may be the best way to experience Bell’s work, at least for first-timers. The specificity of her evening-length works made for the company can sometimes come off as one-note and repetitive. IN|REP, however, showcased Bell’s particular genius via its overall brilliance.