Like many people, Singin’ in the Rain is my favourite film musical. So, I was keen to see its stage manifestation, having missed it since it was premiered at Chichester Festival Theatre ten years ago. I was not disappointed: it closely follows the plot of the film and I had a smile on my face throughout.

Adam Cooper of Royal Ballet and Matthew Bourne heritage has played Don Lockwood in Kevin Clifton’s production since its creation. What a demanding role! Gene Kelly no doubt worked very hard, but he could pace his appearances in most of the scenes over several months, whereas Cooper has all the scenes in each performance on-stage. He presents a very likeable character and his singing quality came as a pleasant surprise. I’m not convinced that the tap/show-biz style of dancing is his greatest strength, but it works fine and he is surrounded by skilful young practitioners. 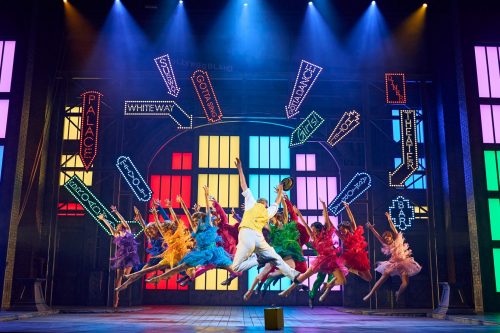 The Singin in the Rain Company
Photo: Manuel Harlan

One of the features I particularly enjoyed was the frequent ensemble dance sections with eye-catching patterns and flawless execution. Andrew Wright, the choreographer also shows his mettle in the dance numbers for the leads. He is aided by Kevin Clifton as Cosmo Brown, Lockwood’s friend and dance partner. Apart from Clifton’s rapid, precise movement he has a flair for comedy and makes the most of Make ‘em Laugh and Moses Supposes, favourites of mine from the film. Charlotte Gooch, as Kathy Seldon the ingénue Lockwood falls for, is also a fine dancer and matches the acting skills of the two male leads. Faye Tozer has the delicious role of Lina Lamont, the beautiful silent screen star who can’t sing and talks with a screechy whine. She and Clifton share the comedy honours. 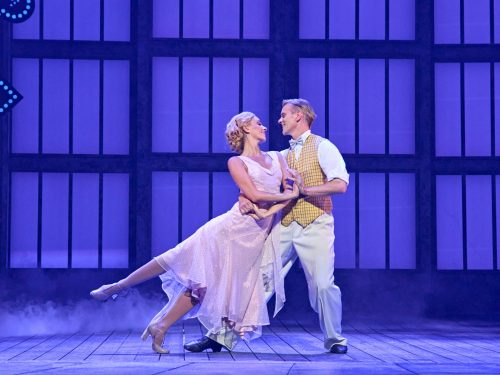 From the rest of the talented cast, Sam Lips impressed me as he sang Beautiful Girl and fully deserved his bow at the final curtain, where the audience gave the team a standing ovation. Harriet Samuel-Gray plays the Cyd Charisse femme fatale in the Broadway Rhythm ballet with captivating slinky dancing. Simon Higlett’s sets are lush and inventive, capturing the mood of 30’s musicals. Just one word of warning if you have a seat in the first five rows, take a rain hat as for Singin’ in the Rain a torrent of water from the flooded stage is kicked out onto the audience for no extra charge.