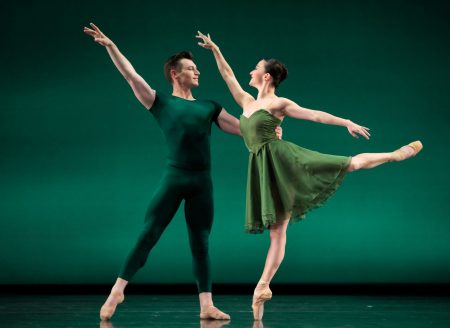 Mixed repertory programs need not have a unifying theme. But it’s fun when you discover one, be it narrative, stylistic or even something that’s a little more quotidian. Opening night of Smuin Contemporary Ballet’s Dance Series 2: P.S. Forever Smuin, the final program of the company’s 28th season, revealed a throughline in that latter category. Every piece on the quadruple bill was titled by a single word. In turn, it felt apropos to choose single words to capture the essence of each work.

Dance Series 2 opened with a pair of world premieres by current company artists, Vignettes by Tessa Barbour and Untwine by Brennan Wall. With its diverse collection of sculptural images, the noun ‘pictures’ resonated throughout Barbour’s Vignettes. It was delicate, graceful and full of delight. Danced by three couples, classical-plus is how one might describe the elegant choreography – certainly steeped in traditional ballet, but with a twenty-first century sensibility. Barbour cleverly injected canon and unison timing into the movement, each flowing effortlessly into the other. Lifts were lofty; jumps, pleasingly quiet. Stretchy, suspended arabesques peppered the slower sections of the Tchaikovsky score (recorded by Aroma Duo), while sprightly entrechat trois ushered in quicker tempos. In addition to performing in the work, Tess Lane’s solid color costumes were beautiful – ethereal, fluid, refined. And while I can’t be totally sure after just one viewing, I believe that each internal section of Vignettes appropriately began and ended with a brief group snapshot. 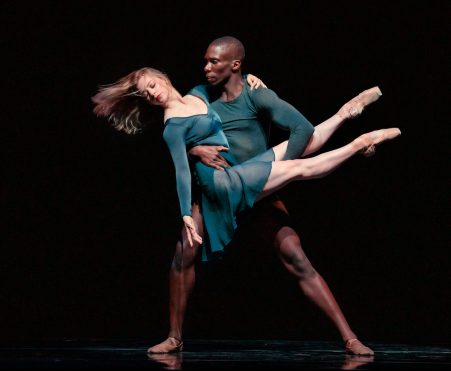 Set to a Max Richter’s adaptation of Vivaldi’s The Four Seasons, Brennan Wall’s Untwine evoked a verb, not a noun. Spinning. The three-part contemporary ballet for four couples was imbued with spinning at every turn. Untwine’s opening sequence, danced with enviable passion by Cassidy Isaacson and Brandon Alexander, contained a myriad of inventive spins. On the floor, on full pointe, in partnering, in lifts; continuous circles with the arms, legs, and upper body. As the rest of the cast entered the scene for Untwine’s second section, a new atmosphere washed over the stage. Tranquil and serene, here the choreography took on an avian quality with rotating bluebird lifts and swimming legs. Finally, the two met in the same space in a moment of co-existence. The spinning continued – promenades in attitude and an array of figure skating-style turns. 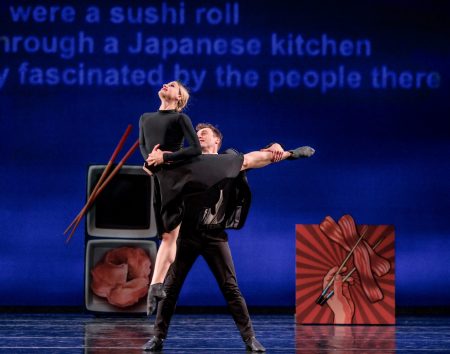 And then, we had ‘surprise’ with Val Caniparoli’s Confessions, accompanied by Nico Muhly & Teitur’s album of the same name. While this suite for sixteen dancers was titled differently when it premiered back in 2018 (If I Were a Sushi Roll), many of my observations from that performance held true. In the work’s nine episodes, the surprises never ended. From humorous scene flats to unanticipated vocalizations to the choreography itself, one couldn’t predict what each moment would hold. With the women in long-sleeve black dresses and the men in suits (costumed by Susan Roemer), Confessions had a real Nederlands Dans Theatre vibe, in a good way. The choreography ran the gamut from attitude turns in extreme flexion to social, ballroom dance to laid-back pedestrianism to quick gestural sequences. Jazz hands framed step-ball-changes, while circular phrase material featured technically challenging contemporary vocabulary. And it all worked together. Confessions is great fun, albeit a little lengthy, particularly in the middle where the musical selections tend towards a similar dynamic space for some time. 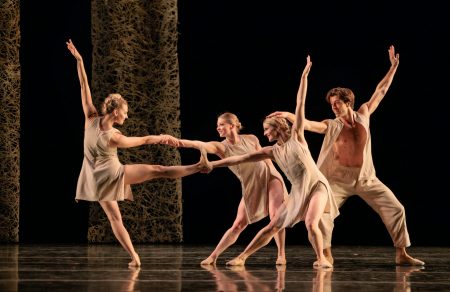 According to the press materials, Amy Seiwert’s Renaissance, which closed the Dance Series 2 program, was “inspired by the 385-mile “Women’s Wall” protest in India to create awareness of gender equality.” The seven-chapter suite for fifteen percolated with such community and connection. Though the contemporary ballet premiered in 2019, Renaissance was new to me, and the moments of cooperation were striking. Balances took three or more to create. Circular clusters needed many. Picturesque moments required everyone – like when the group knelt in a line and rested their heads against each other. Lifts were all about teamwork. The mood was sober, but not somber, and there was a sense of inner groundedness, even when the dancers were in the air. Save a couple of awkward partnering sections, Renaissance shone. And even though it was clearly a suite set to individual selections by Kitka Women’s Vocal Ensemble, the work read as a continuous, committed journey.