Did you ever think you could judge the merits of a performance as well, if not better, than judges or critics? Of course you did – it’s part of the performance process; and, at least in New York, everyone’s a critic. Well, now you’ll have your chance. Officially. Through Youth America Grand Prix.

Not unlike ballet companies, YAGP – the world’s largest ballet scholarship competition – lost its signature events (the 2020 New York Final Round and its annual Stars of Today Meet the Stars of Tomorrow Gala) as a result of coronavirus restrictions. But YAGP 2019-20 regional competitions in 34 cities in 14 countries around the globe that preceded the New York Finals – involving some 12,000 aspiring dancers, age 9 – 19 – had concluded, and the top regional placements in each of YAGP’s performance categories had already been determined. Now, YAGP has converted the orphan semi-final placements in its Ensemble Category into a competition of sorts, with viewers deciding the ultimate winner. 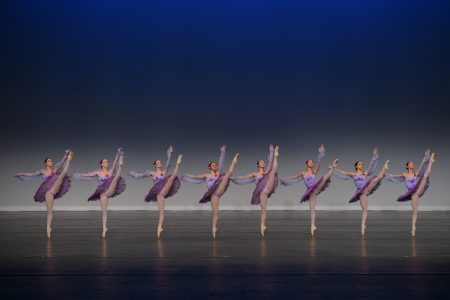 Dubbed the “Audience Choice Awards,” for three days this weekend YAGP will Live-Stream performances by the top 3 ensembles from various locations will be showcased in the Livestream Events. Then it is up to the audience to decide who wins by voting in the comment section. The competition begins tonight, May 15, at 7 p.m. EDT, continues tomorrow at the same time, and concludes Sunday, May 17, at 3 p.m. EDT, each event Live-Streamed via YAGP’s Facebook page (the link is at the bottom of this article). The top 12 performances that receive the most votes will be announced throughout the week of May 18 – 22. On Saturday May 23 at 1pm EDT, those finalists will have their performances aired one more time for the audience to cast their final votes. On Sunday May 24, the ensemble that received the most votes will win YAGP’s Ensemble Audience Choice Award.

The procedure is as follows: During the livestreams, viewers should leave a comment indicating their favorite ensemble (they must also tag the corresponding school with the same comment). Voting will remain open for 24 hours after each video performance ends. Viewers may vote on multiple pieces, but only one vote per viewer per piece will be counted. The top 4 pieces from each day’s event will then move forward, and viewers will be able to vote their final choice on May 23.

In order to avoid becoming a popularity contest, many YAGP judges and alumnae, along with the YAGP Artistic Director, Larissa Saveliev, will watch along with the audience and comment on the performances. Voting will be based on exceptional artistry, impressive technique, and memorable choreography.

As of this date, 43 ensemble performances will be streamed on May 15, 42 on May 16, and 36 on May 17, by schools from the USA and Canada to Brazil, China, Italy, Israel, Japan, Mexico, Portugal, and Russia. A complete, up-to-date listing is available on YAGP’s web site. It is not yet known whether the competition will subsequently be expanded to include other YAGP performance categories.