All the world loves Swan Lake and the audience at the London Coli who came to watch Irina Kolesnikova’s interpretation of Odette/ Odile, were no exception. The programme gave no clue as to who was responsible for the production, a very traditional Soviet style reading with a happy ending, but no-one seemed to care much as they cheered and clapped. What they wanted was the iconic image of the ballerina, her back arched and arms extended into wings, flanked by immaculate rows of tutu-clad swan maidens, and this is what they got. 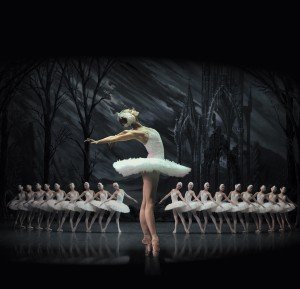 The centrepiece of the production is Kolesnikova, a principal dancer who has created an impressive aura and understands star status like few do in these egalitarian times. It was in the ballroom scene they she came into her own, dominating the stage, executing a brilliant solo and whipping of a series of fouettes at breakneck speed.

The softer passion needed for the lakeside meeting of the lovers proved a more difficult task and she was not helped by Denis Rodkin, although he too proved himself an excellent dancer. He was an attentive partner, never missing a hold or lift, but he might as well have stayed in Russia for all the chemistry there was between the two. This role has become Kolesnikova’s trademark and she has refined each pose to maximum effect, a picture perfect swan, even if the fluid sensuality was lacking. It was only in the final act that the couple captured a little of the passion, as the swan corps and a fierce Rothbart helped to build the drama.

Rothbart, Dmitriy Akulinin, made a fine impression from his first entrance, helped by a strong stage presence and a powerful jump. (I was rather hoping for an alternative ending where Odette decides that Rothbart is the better bet.) Also impressive was Sergei Fedorkov in the much-maligned role of the Jester. This character can be a rather annoying interruption to the action but Fedorkov did much to liven up the first act with his virtuosic technique and genuine charm. The Pas de Trois was notable particularly for the dancing of Olga Pavlova who displayed neat, bright footwork, a lovely line and engaging presence.

The corps de ballet, were drilled to perfection their lines, musical timing and positions were flawless. The Little Swans zipped through their number to encouraging applause, but the three Big Swans had a difficult time attempting to look graceful with rather awkward choreography. This company, directed by Konstantin Tachkin, may not have the huge budgets of major opera houses but it was attractively designed and costumed, particularly the Ballroom scene, although again no credit was given. There was to be no lump-in-the-throat moment in this performance but for all that it was a Swan Lake that fitted the bill.