According to the program notes, “Community participation has been a part of the step tradition since its inception in the early 1900s — members of the audience are invited to clap, stomp, cheer, and participate in call and response with the Artists throughout the performance.” Indeed, audience members shouted out enthusiastically as soon as the performance began. And DRB acted not unlike a cheer squad — encouraging the yells via their peppy dancing. DRB’s routine was framed around the theme of “Stepflix,” a clever take on “Netflix.” The team exhibited different movement styles as if they were assorted movies and TV shows being browsed. Their arms jutted up and out with power, their feet slammed the floor, and they smiled broadly, all while keeping their timing admirably tight. 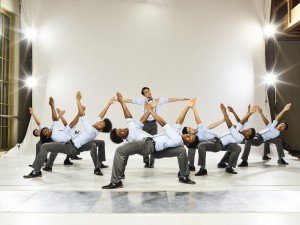 Founder and Executive Director of Step Africa!, C. Brian Williams, then took the stage, explaining that he created Step Africa! in 1994 while living in South Africa, and that he sought to spread joy and unity by presenting stepping as an art form. Step Africa!, through its national and international tours, continues to do just this — invigorate and educate diverse audiences and bring people together via stepping.

Step Africa!’s 25th anniversary performance highlighted the company’s choreographic range. In some pieces, the dancers’ stepping technique took clear precedence, while in others, the dancers incorporated contemporary dance, African dance and hip-hop to various types of music. In each of the works, however, the dancers gave it their all.

Idemo!, choreographed by Christopher Brient, was inspired by Step Africa!’s 2015 tour of southeastern Europe (“Idemo” means “Let’s go,” in Croatian). A chorus of rhythmic feet and voices leads to a fun series of call and response exercises designed to engage the audience. 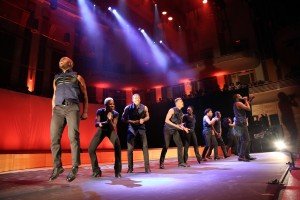 In The Wade Suite, somewhat reminiscent of Alvin Ailey’s Revelations, dancers (the women in church hats) performed to live vocals by Matthew Evans, Vincent Montgomery, Sherise Payne and Krislynn Perry. Here, as the written program detailed, the movement blends South African gumboot dance, collegiate stepping and tap dance with the African American spiritual. The soft wide circles of praise on view in Deacon’s Dance (Movement One), choreographed by Bongkosi with Ronnique Murray, pair nicely with the lively moods of Wade (Movement Two), choreographed by Paul Woodruff, LeeAnet Noble, and Kirsten Ledford, which include a baptism scene. The effect is definitely heartfelt.

In nxt/step:hip hop, at first men in hoodies sit on crates, and women later join, seated on higher stools behind them. To choreography by Jakari Sherman, and an original score by Sherman and Jonathan Matis, their feet bounce and slide. Passing 25, choreographed by Ryan Johnson with Christopher Brient, Brian McCollum, and Jason Nious, conveys complexity, moving from classic stepping to cacophonous delirium. Both of these works speak to contemporary times and conjure hope.

It’s in the two works directly honoring Zulu culture that Step Africa! shines the brightest. In Umngane, choreographed by Makeda Abraham, Mfoniso Akpan, and Aseelah Shareef, company members move organically to the sounds of master drummer Kofi Agyei. From languorous stretches to high kicks and rocking hips, the dancing builds and grows faster and more fierce. Long past the point when most dancers and musicians would have tired, Step Africa! showed off their stamina. The dancers kept sweating as they leapt, and Agyei’s percussive beats kept mesmerizingly piercing and rattling the theater.

The closing work, Indlamu, brought DRB back to the stage, where they stood in support of the amazing feats before them. Originally choreographed by Mbuyiselwa “Jackie” Semela, the dancers appear in traditional Zulu attire. Warriors, to the music of live drumming, practically walk on air, they bound so high. High pitched whistles blare and rear ends shake as dancers take turns outdoing each other in exhausting, impressive solos. This was the perfect way to conclude Step Africa!’s 25th anniversary celebration, and the crowd wasted no time jumping up for a well-deserved standing ovation.