Deborah Slater Dance Theater
In the Presence of Absence

Streamed online – February 18th-27th – As the time came to bid February adieu, Diablo Ballet had a special invitation for virtual audiences. For a little over a week, they made their most recent program, Cinderella’s Wedding, which ran at The Lesher Center for the Arts in Walnut Creek over Valentine’s Day weekend, available for online viewing. It was such a wonderful opportunity both for viewers not in the area, or for those who may still feel a little more comfortable at home than in the theater. 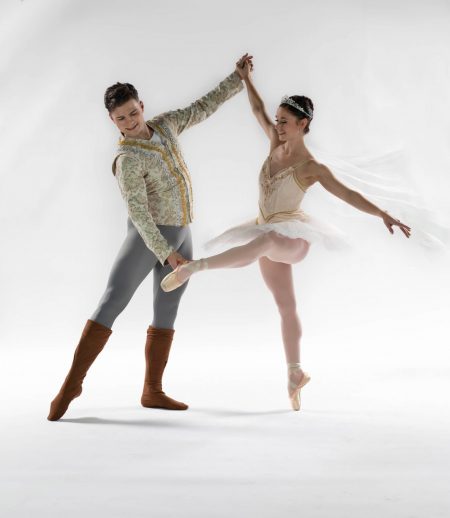 Diablo Ballet, under the Artistic Direction of Lauren Jonas, is known for crafting well-rounded programs, with something for every taste. Cinderella’s Wedding was no exception. The quadruple bill was filled with contemporary ballet, classical ballet, historic works and new debuts. It was classy and charming – a real treat to enjoy in person or at home.

An ideal welcome into the performance arena, George Balanchine’s Tschaikovsky Pas de Deux took the opening spot on the program. What an elegant duet to transcendent music, danced beautifully by Olivia Powell and Walker Martin. The classic 1960 choreography is simply a joy to watch, a love letter to movement – light and lofty, sophisticated, precise yet delicate. Never overly busy, but always captivating. Powell and Martin handily delivered both the partnering and the individual variations. The fish dives, daring; Martin’s triple tours en l’air, textbook perfection; and the final lift, phenomenal.

Up next was the first world premiere on the bill, Wayfaring Pilgrim, choreographed by current Diablo dancer Michael Wells, set to a blues suite. While the contemporary ballet ensemble work did not feel like a linear narrative, it was surely charged. Moments where the group clustered together and then fractured apart felt a like comment on community, and the loss of it. Solo sequences indicated a oneness, an isolation, even when surrounded by others. Wells cleverly injected the choreography with stylized pedestrianism, giving Pilgrim an approachable, relatable tone. The drama and emotion were well communicated by the entire cast, though the unison was a bit iffy from time to time.

Wells was back with Amanda Farris for an excerpt from Val Caniparoli’s Book of Alleged Dances (1998), scored by John Adams. The chosen chapter, a duet titled She’s So Fine, provided another lens on contemporary ballet but this time, peppered with disco tropes. Slides and step touches abounded with appropriately matched arm gestures – rolling hands, motions led by the thumbs. It was a celebration of the fun of that time. But the genius of Caniparoli’s work is that She’s So Fine is not a ‘disco’ duet nor does the music particularly suggest it. Instead, disco form makes an appearance every once in a while, almost like the pas de deux is seasoned with that esthetic.

The final world premiere, and centerpiece of the program, was Julia Adam’s Cinderella’s Wedding – a lovely, graceful interpretation of the last part of the Cinderella narrative. As the work begins, the audience is transported to the thick of the action. The Prince (Raymond Tilton) and his friend’s (Felipe Leon) search for the foot that fits the shoe left behind at the ball. Feet that hope to be a match appear from behind the scrim, until Cinderella (Jackie McConnell) is found. And from there, the story unfolds with a celebratory reception, fairies from every season, and a happily ever after for the happy couple. Standout performances included Powell as the stepmother as well as Wells and Martin as Cinderella’s stepbrothers. In fact, the pas de trois for the three of them was a significant part of the overall piece. The ensemble waltz sequence was sweeping and grand. And amongst the fairies, Julia Meister’s spring was sprightly and staccato, while Jordan Tilton’s summer was oh so dreamy. Joyful, buoyant and flirtatious certainly describes the main couple, with the final pas de deux filled with giant lifts taking up space. An excited, elated tone pervaded the entire stage from beginning to end, albeit a stage that was a little crowded.

Streamed online March 10th-March 31st – Smuin Contemporary Ballet recently completed its winter Bay Area tour, visiting venues in Walnut Creek, San Francisco, Carmel and Mountain View. But fear not if you missed them in person. Smuin has joined with other local companies to make performances available and accessible to online viewers. Dance Series 1: Love, Smuin fully delivered on Artistic Director Celia Fushille’s promise of range, both in style and music. And while it shouldn’t be, it is still noteworthy in the ballet ecology to see an entire mixed repertory bill comprised of female choreographic voices. 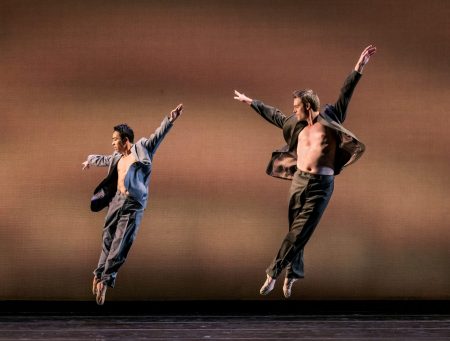 Everything in Amy Seiwert’s Been Through Diamonds, a sweeping 2008 work set to a gorgeous Mozart score, was in constant motion through classical ballet vocabulary, contemporary phrases, and four changeable couples. During the first moments, the audience is introduced to three of the four pairs, all displaying a sense of hope, lightness and possibility. Then quickly, the partnerships begin to shift and mix, alongside a plethora of tonal layers. Newness. Surprise. Flirtation. Enchantment. Two questions began to emerge: ‘what might this next relationship be’ and ‘what might be learned about and from each other’. Midway through Diamonds, we meet the fourth couple, who also interacts with the rest of the cast. With a more andante musical tempo at this point, the movement felt sophisticated, gallant and graceful, yet still imbued with Seiwert’s choreographic dazzle. The canon timing she injected into unison segments suggested a shared emotion, experienced at different times, and in different spaces. The musicality was enviable – a leg fully extended in a beautiful position would suddenly bend into attitude, as the music simultaneously accented a chord or note. And while there was a fair share of serious or somber moments, the company seemed to be having so much fun.

Gina Patterson’s You Are Here (originally choreographed for Cincinnati Ballet in 2013) brought an even more contemporary note to the evening. An ensemble piece for four women and six men, the landscape was charged from beginning to end, which fit with the music perfectly. While also of today, Ludovico Einaudi’s score conjured an undeniable Baroque quality – accumulation, constant flow and almost a quiet sadness. Patterson’s choreography followed suit to a tee. Running through space and gazing at the horizon communicated searching and longing. Small, scooping hand gestures and urgent embraces percolated with care and attention. The male pas de deux was fantastic, and when Patterson’s choreography called for it, the unison patterns were so precise and clear. Some different costumes, and a slightly brighter stage would have made the work a home run.

I enjoyed Seiwert’s Dear Miss Cline when it premiered back in 2011, though I have to admit it wasn’t my absolute favorite. Set to a selection of recordings by Patsy Cline, the dynamics felt a little static and the number of internal stops and starts broke the flow of the overall composition. When I saw it two years later, I had changed my tune. The stop/start thing was (and still is) present, but a different cast had brought a vitality and energy that revealed so much more dynamic range. Such was true at this viewing as well. Dear Miss Cline transported us to a land of joy. Abounding with lilty social dance, smooth footwork, even some square dance influences, the large group work (14!) sparkled. A youthful, exuberant community oozed from every inch of the stage, whether the dancers were engaged in stylized, everyday tasks or complex partnering. No matter the chapter – charged, cheerful or cheeky – the cast’s acting was on point, especially the Tra le la le la Triangle pas de trois, danced by Maggie Carey, Mengjun Chen and Yuri Rogers. The humorous moments of purposeful uncertainty were delightful.

Livestreamed April 8 – Absence and presence. In my mind, complete opposite states of being. Though after Deborah Slater Dance Theater’s (DSDT) recent showing, I might reconsider that stance. Perhaps the relationship between the two is more complex, richer, maybe even wonderfully murky.

Last weekend, DSDT invited audiences back to their theater/studio space in San Francisco to witness an early works-in-progress edition of In the Presence of Absence, a collaboration between Artistic Director Deborah Slater and performer Tammy Johnson. Derived from interviews undertaken about these past two pandemic years, as well as company members’ personal journeys, the set of solos (and one group work) embodies the vast range of experiences that this unprecedented time has birthed. How folks have felt absence, how they have felt presence and how the two may have unexpectedly intersected. Original text and spoken word from Youth Speaks added a powerful layer of voicing to the various movement episodes. 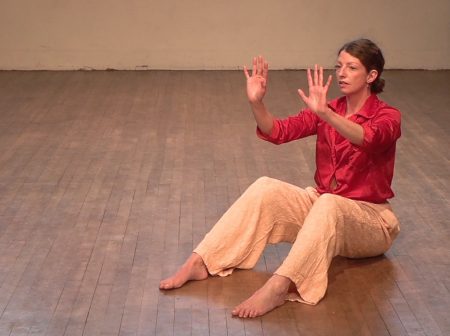 The evening’s early solos, in which the dancers performed both movement and the text, were imbued with themes of reaching, pivoting, shifting and changing directions. Certainly fitting narratives for this time! The movement/word connection still needs to coalesce (not surprising for a work-in-progress), and it will be fascinating to see how those theatrical devices gel and morph over time. Movement-wise, the phrase material had an undeniable 90s quality: lots of backward somersaults, static attitude holds, Graham airplane turns and a slight improv-like esthetic. Later solos featured a recorded text, so the movement felt much freer and more open, except for one piece that was very hard to see because of the incredibly dark lighting.

One of the most significant things about In the Presence of Absence is that it was truly a hybrid performance, with shows happening live and in person on both Friday and Saturday, and a livestream option available for opening night. Friday’s online offering happened in real time, as opposed to a taped version after the fact. And it went off without a hitch. The tech was without flaw, it wasn’t at all shaky, never cut out and the volume was right on point. This was a real triumph for DSDT. While many companies have been able to accomplish this hybrid format since March of 2020, it’s of note that others have not managed to pivot and shift in this way, including larger companies and presenters with more resources and greater technical capabilities.

Having said that, the night was far too late in starting. By the time the introductory remarks were completed, it was nearing twenty-five minutes from the appointed start time. Not an entirely uncommon occurrence, but a real pet peeve for many, including me.