I read a June 2015 New Yorker article about Elizabeth Streb and her “daredevil dances,” and I was intrigued. Just after Halloween, in 2016, I had an opportunity to see STREB for the first time. Right from the start, it was clear things would be different from most productions of dance at the Kennedy Center. Audience members were told to ignore the prerecorded admonitions about the use of cell phones and video. Make noise, we were told, share what you see on social media. People did make noise. Many times, I heard screams of “Oh My God!” And the dancers also shouted at each other, sometimes counting aloud, sometimes yelling names as a form of encouragement. The beginning of SEA (Singular Extreme Actions) featured a trampoline. Dancers in bright red unitards enacted an extreme version of the childhood game of jumping on beds and landing on mattresses. They attacked the air, flew horizontally, and nearly missed hitting each other multiple times. Despite all this, the performance, as a whole, was less daring than I had imagined.

In an early section titled SQUIRM, seven dancers piled on top of each other in a plexiglass box, making a large human sandwich. I wasn’t so impressed. This may have simply served to give the heavily breathing dancers a chance to rest. In another section, TIED, a male and female joined by a long cord yanked each other around. This was playful, and also sort of juvenile, and not particularly innovative. Meh, again. The final section before intermission, SLAM, was more interesting. The dancers doused themselves in chalk and threw themselves into a tall, flat blackboard, like one might throw oneself into a velcro wall. Like human building blocks, they hung from this surface, and hung off of each other. 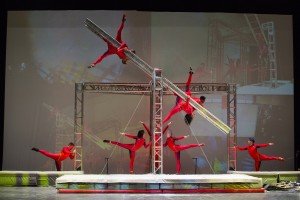 After intermission, a t-shirt gun appeared and launched its goods into the arms of theater patrons. That was a first for me at the Kennedy Center! In the second half, showy equipment dominated. A semi circle with a long flat side was rolled by a dancer within its structure, while the rest of the dancers clung to the rocking side, or stood on it, riding the structure like a surfboard. This reminded me of a human hamster wheel. A huge shiny metal contraption, with ladder-like pieces, including a central pendulum with rungs, remained at the back of the stage throughout the performance. This was the piece of equipment everyone was waiting to see put into action, and it was finally used at the end. It was worth the wait. The dancers, like trapeze artists, held on and let go, but when they let go, they sailed into the mats below from a great height, like human rain drops being flung off a spinning propeller. 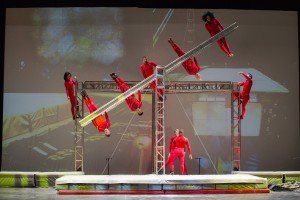 I knew I would question whether what the artists of STREB do is “dance.” I quickly concluded that it is not. And Streb, in a post-performance discussion, readily agreed. Streb, who calls herself an “action architect” and her dancers “action heroes” or “action engineers,” said that what she choreographs is “action,” rather than dance. She explained that action is an “abrupt system” that doesn’t lend itself well to story or music, while dance “steals” grace and smooth transitions from music. When someone during the discussion pointed out that SEA is accompanied by DJ selected music, Streb shrugged and called herself “a container of contradictions.” She pointed out that the music often stops so the audience can hear the splats. When someone asked why Streb sometimes refers to her company’s artists as “dancers,” given that she denies what they do is dance, she matter of factly explained that only dancers have the finesse and timing to succeed  in her work. 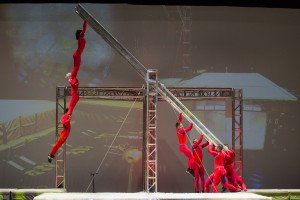 Streb also commented that action is about class. She generalized that those who are poor have less capacity to avoid danger than the rich. The rich are less likely to have scars than the poor, and are more likely to have tall fences (visions of Trump’s proposed wall emerged in my head at that point). In training her dancers, Streb said one goal is to get rid of privilege, to teach the dancers not to worry about the future. Indeed, a lack of worry seems necessary to do what is required. Streb didn’t hesitate to say that danger and risk are inherent in her work because anything safe is not action. Her dancers are known for being fearless. They have an appetite for unconstrained movement, they’re incredibly strong, and they’re generally good at not getting “too hurt.”

So, if what STREB does isn’t dance, is it like the circus? No, said Streb. Her work is unlike that of circus performers, she said, because what happens in the circus is “tedious” and “repetitive” and the performers never land. Hmmm. Well, it’s true no one lands quite the way the “action heroes” of STREB do. They dive facedown into the floor with relish, or tilt backward, straight as a board, until they smack the ground. It’s not true, however, that the performance of SEA lacked repetition, or tediousness. And I spotted grace, so typical of dancers, especially in the corkscrew spiraling falls and and swan dives that lingered in the air. 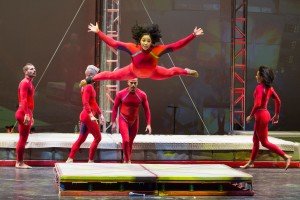 Streb said that she hopes audiences experience three things from her work: fright, rapt attention, and moments of joy. A young voice in the audience assured Streb that SEA accomplished that. Yet my attention waned at times, and my moments of joy were brief and fleeting. As for the fear element, for me, at least, I don’t really want to be scared when I go to the theater. Call me old-fashioned, I guess. I’d rather see a sublime, graceful narrative story ballet set to classical music than action heroes in unitards soaring through the air like rockets and then slamming their bodies into the earth.