Graeme Murphy’s Swan Lake which premièred back in 2002, proves again that Tchaikovsky’s great score and the iconic swan myth can be retold in many ways. Murphy gives the story a contemporary flavour in a very different, but plausible, setting allowing the integrity at the heart of the production to shine through. The Australian Ballet offers a stellar trio of principals, Amber Scott as Odette makes an arduous emotional journey from little more than token Princess Consort to self-possessed woman in charge of her own future. She has the classical line and technique as well as the charisma to make us believe in this journey. Dimity Azoury, still only a soloist, scored a triumph as Baroness von Rothbart, complete with flashing eyes and the tenacity of a rottweiler. Adam Bull as Prince Siegfried is portrayed as something of a cad but into the final scenes he finds true depth. As curtain came down on the opening night he was a man with his heart in tatters. 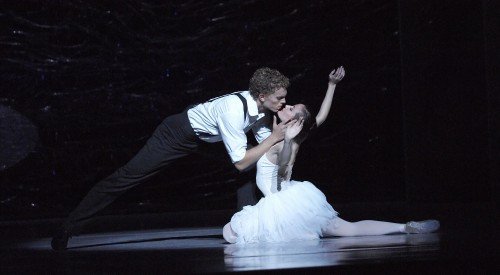 The drama is full on from the start as the triangular love scene is set. This should be the bride’s day but Odette has little chance with a vacillating Prince already in a relationship with the manipulative Baroness. It is a clear-cut battle between the vulnerable innocent, Odette, and the powerful and knowing Baroness which also translates to the colour scheme. Into the pastel elegance of Act 1, the Baroness introduces the Czardas troupe: dark and sexy in black and gold, to up the temperature. In this heightened atmosphere the Pas de Trois is effectively choreographed with Odette losing out at every turn until, not unlike Giselle, she tears the two lovers apart and loses it. 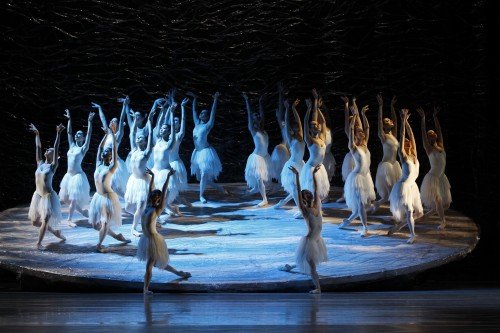 Incarcerated in the sanatorium she escapes to a dream world of swans. Act 2 is a filigree gem where designer Kristian Fredrikson has worked his magic while Murphy uses his rich dance background to full effect bringing rare beauty to the lakeside scenes. The set of a raised pool of swans against a textured backdrop of lush foliage, is an inspired vision. Murphy has found in his unique classical style, new structures and images where bodies still find the iconic curves but now in innovative forms. His swans are far from feathered decoration, rather they create a nurturing sanctuary for the damaged Odette supporting and strengthening her. Here her dream Prince may only enter stripped of his regal status and simply a man in love.

Odette’s developing confidence turns the tide in Act 3 as the next chapter in the battle between good and evil is played out. Azoury, as the Baroness, rules supreme in her lair of heavy brocade and gilt, but by the time the party is over, she has hit rock bottom. Her final solo to the music of the Russian dance is her climax: a combination of Murphy’s choreographic skill and her expressive arms and hands. 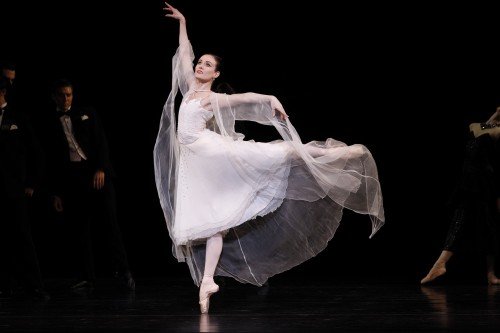 Scott, too is given fine material and weaves magic from it. Tchaikovsky’s music for the grand entrance of Odile, has an ironic twist as the doorway is empty and it is Odette who is discovered centre stage dressed in white and draped in a ghostly veil. She proves to be all flesh and blood and Siegfried is enthralled. The Baroness plays her final card summoning the sanatorium staff but Odette escapes to the lakeside.

The final scene is sombre, the swans in sepulchral black. Odette arrives in her glamorous wedding dress which Siegrfried removes only to reveal a black swan dress underneath. They dance their final pas de deux and seldom has the melancholy Act 4 music been used to such emotional effect. Ultimately she slips from his arms to join her sister swans and find peace in the darkness of the lake.

The familiar music surfaces in unfamiliar places but it is never used recklessly and in the third act, notably in the Pas de Fiancées it reached a level of exhilaration not usually heard. Praise is also due for the fine playing from the Orchestra of the English National Opera and sensitive conducting from Nicolette Fraillon.

While the ballet is built around these three vividly drawn characters this is a company work and Murphy never loses touch with the context. In each scene he has created interesting, witty characters and the company, so rich in talent, brings to life these many cameos roles.

An Australian Dance Festival: Dance Down Under